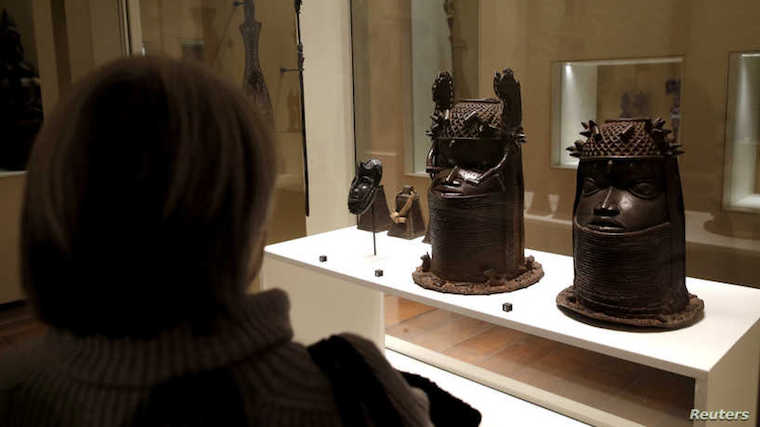 FILE - A visitor looks at artifacts from the former Benin Kingdom displayed at the Quai Branly Museum in France, Nov. 23, 2018

More than two years after France promised to return colonial-era treasures to their African homes, Benin — ostensibly the first recipient of the groundbreaking policy — still awaits them. But on Friday, a small museum outside Cotonou celebrated the return of antique royal scepters gifted by a group of Paris gallery owners.

In 2017, French President Emmanuel Macron sparked joy — and unease — when he announced colonial-era treasures from Africa would be returned, or shared through exhibitions and loans. The first gesture would be the speedy return to Benin of 26 objects looted by French colonial forces in 1892.

But turning that promise into reality is not so easy. Only last December did France's Culture minister offer a concrete timetable, saying the objects now housed at Paris' leading African art museum would be returned by 2021.

Enter a group of Paris Left Bank gallery owners, whose private efforts are moving much more quickly than public ones. They have not only acquired and returned precious antiques to Benin for years, but raised funds to build a small museum outside Cotonou to house them.

On Friday that institution, the Petit Musee de la Recade, welcomed one of its biggest troves to date: more than two dozen pieces, including 17 scepters, coming from the ancient Kingdom of Dahomey, located in parts of what is modern day Benin.

Speaking by phone from Cotonou, Paris gallery owner Robert Vallois said the gesture doesn't constitute restitution of ill-gotten art. Instead, he and his colleagues bought the antiques in France, with the specific intent of returning them to Benin.

Macron's restitution promise has been more complicated to realize. It means changing French laws and ensuring old and fragile pieces are properly housed.

With French support, Benin is building a new museum in Abomey, once the capital of the Kingdom of Dahomey. Jose Pliya, head of Benin's national agency for heritage promotion and tourism development, spoke to VOA about the process last year.

"We really have to have the good condition — temperature, isolation, conservation — to welcome them ... a lot of things have to be done. The training of all the conservators in Benin, how to protect the pieces," Pliya said.

Despite the roadblocks, Macron's restitution vows add pressure on other European countries and museums with African collections.

Vallois said he and his gallery group are not part of such debates. Instead, they're following their own counsel — and what's important to them is that the objects return to their countries of origin.