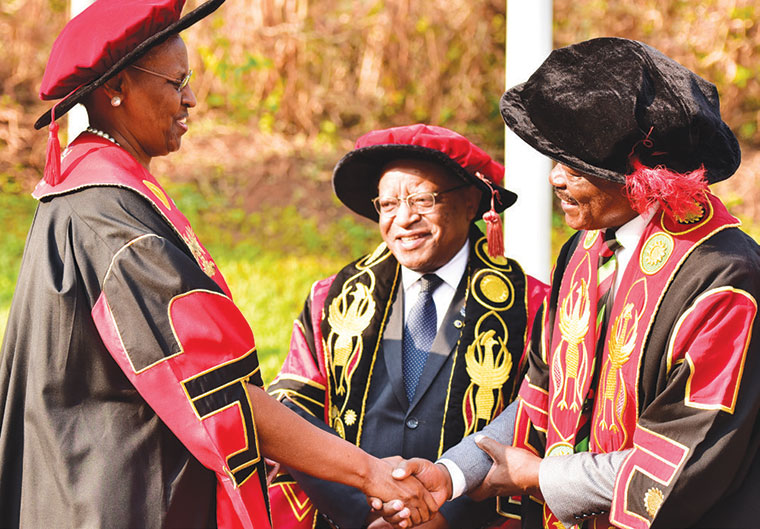 Makerere University has confronted some of the worst student riots in the recent past and vice chancellor Prof Barnabas Nawangwe warned yesterday during the 70th graduation ceremony that errant students will continue to be shown the door.

Speaking at the first session of the university’s 70th graduation yesterday, Nawangwe said his actions are aimed at enforcing discipline.

“We still have pockets of hooliganism, apparently fueled by forces outside the university. I wish to assure our stakeholders that the struggle to weed out indiscipline from Makerere University will continue and students who have made hooliganism a hobby or a trade will be dismissed from the university,” Nawangwe said, drawing loud shouts from students.

He said majority of students are now concentrating “on what brought them to Makerere.”

Nawangwe said students have changed their attitude and are initiating activities to rebrand the university through providing services such as free medical checkups, cleaning markets and roads and construction of decent houses for the elderly. The minister of Education and Sports, Janet Museveni, said the public looks forward to a time when Makerere will find a more reasonable and educated way of resolving conflicts.

“Universities are places where you are supposed to learn and prepare for your life...In young countries such as our own, a university graduate is looked at as a responsible and important participant in society,” Janet said.

She said the public “understandably becomes disappointed and confused to see people who are tomorrow’s leaders choosing methods that promote conflict to resolve their disagreements.”

Since his appointment in 2017, Nawangwe has been harshly criticized for his highhandedness in suspending students and staff members and running the university affairs. At the 70th graduation scheduled to run till Friday this week, a total of 13,509 graduands will be presented for conferment of degrees and diplomas.

Of these, 6,820 are female and 6,689 are male. Some 61 graduands will receive degrees of Doctor of Philosophy (PhD) and 1,173 graduands for master’s degrees. Out of the 13,509 graduands, 422 have obtained first-class degrees and certificates of recognition.

Janet tasked the university to investigate the dwindling numbers of female graduates at Master’s and PhD levels.

“Makerere has, this time, presented more female than male graduands at 50.5 per cent compared to 49.5 per cent respectively. I congratulate the university for this monumental achievement but at the same time I draw your attention to the disturbing fact that the female graduands at undergraduate level is not matched by that at master’s degree level, which declined to 40.1 per cent. It is even a lower 27.9 per cent at PhD level,” Janet said.

Yesterday, the ceremonies kicked off with graduands from the colleges of Agricultural and Environmental Sciences; Natural Sciences; Education and External Studies; and Health Sciences.

Sarah Namayengo, the best overall student in sciences with a Cumulative Grade Point Average (CGPA) of 4.83, was honoured with a plague and Shs 1m as startup capital. Namayengo graduated with a Bachelor of Conservation Forestry and Products Technology.

On Thursday, Rita Namukose from Makerere Business School (Mubs) who topped in Humanities with a CGPA of 4.92 in the Bachelor of International Business will also be honoured.

This year’s graduation has been marred by delays in delivery of patented gowns by Team Uniform Ltd. Speaking on the sidelines of the event, the university acting communications and international relations manager, Dr Muhammad Kiggundu, told The Observer that gowns for other graduands were ready.

“This has never happened to the university but we had a hiccup in the supply. [For instance], Students graduating on Friday will pick their gowns on Wednesday [today]. The supplier will give us a brief after the graduation about what went wrong,” Kiggundu said, adding that they have worked with the supplier for at least five years and doing “a great job for us”.

He insisted that no student will graduate without a gown this week. Nawangwe also apologised for the delay.

“Allow me begin by making an unusual apology to our guardians and to all stakeholders...Management regrets this unfortunate incident...I wish to assure you that all necessary measures will be taken to ensure that this unfortunate situation does not occur again at Makerere University.”

Today (Wednesday), the university will receive graduands from the colleges of Business and Management Sciences, Computing and Information Sciences and Veterinary Medicine, Animal Resources and Bio-security.

Thursday has been allocated to only Mubs graduands. On Friday, the ceremonies will end with colleges of Engineering, Design, Art and Technology, Humanities and Social Sciences and School of Law.

0 #1 Lakwena 2020-01-16 08:29
But Prof Nawangwe should be reminded that the First ends up being the last. Doing the right things for students and/or staff is more constructive than raw threats.

In other words, the students are the reasons he is in that office.

Many parents are now sending their children to e.g.the Uganda Martyrs University, Nkozi and the Ugandan Christian University (UCU) Mukono.

And whose campuses are mushrooming throughout the country.

In other words, as a result these new alternative/development the number of students in Makerere University is dwindling by the year.
Quote | Report to administrator
Refresh comments list
RSS feed for comments to this post
Add comment