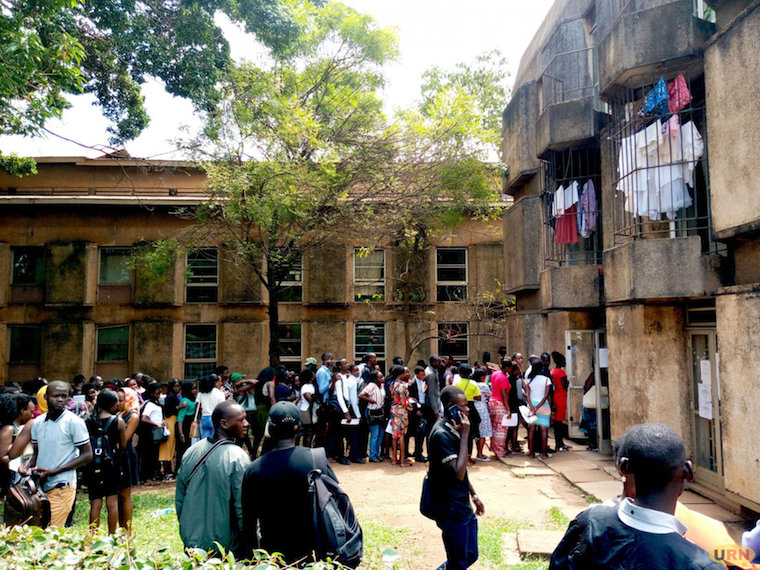 Makerere students queue up for the imported graduation gowns

Following a social media backlash, Makerere University has distanced itself from the deal that saw a local supplier import into the country 7,000 graduation gowns from China ahead of the 70th graduation ceremony next week.

A big number of Ugandans on social media expressed 'shock' and disappointment at the move by the sole contractor, Team Uniform Limited to import the graduation gowns from a foreign country instead of procuring them from local suppliers so as to boost the already limping economy.

Students are charged a mandatory Shs 98,000 each for the graduation gown which would translate to Shs 1.3bn from the 13,509 graduands set to graduate next week in a four-day ceremony.

Earlier, the university's communications officials claimed the gowns were imported because they did not want to compromise on quality just for the sake of promoting local investors. Until 2017, each graduand would purchase or rent their own gowns from local suppliers.

Makerere vice chancellor Prof Barnabas Nawangwe said he was equally disappointed just like so many others that no local suppliers could be contracted to supply the gowns to a public institution like Makerere. Nawangwe said the supplier was put to task by the university management to explain why he opted to import the gowns, a move which is taking foreign exchange out of the country. According to Nawangwe, the contractor justified his decision including delayed payment and lack of an advance payment.

“Of course this is going to be addressed by [university] council. Council is the overall governing body it is going to ask questions why did it happen like this? And once council address that we will inform you,” Nawangwe said.

“Where he [contractor] makes them, how he makes them provided he makes them to the desired standards and specifications that we have given him that is what is important,” Nawangwe added.

Upon the arrival of the first consignment of the gowns, Alfred Masikye Namoah Makerere academic registrar instructed all college and school registrars to report to the central stores to collect the gowns for the graduands in their respective colleges.

"Of course as a government institution, we’re disappointed that his [supplier] action is not supporting BUBU [Buy Uganda Build Uganda policy] because we know that there are enough people in this country that can make those gowns in a short time. We asked him why did you do this? He has explained, he claimed the money was released a little late, and we said but you quoted saying you had the capacity to supply and then be paid."

"But of course, he gave excuses [that] in the past the money has been paid late and so on. So it is not our wish that the gowns should come from abroad. They should be made here to support our economy but it is not Makerere responsible for that. It is the supplier and the relationship is between us and the supplier." Nawangwe added.

The distribution of the gowns kicked off this morning in various units of the institution. Our reporter visited the college of Agriculture and Environmental Sciences (CAES) and college of Education and External Studies (CEES) where the distribution was already taking place, amidst scuffles and congestion.

By 1:00 pm, there was no sign of distribution of gowns at the college of Humanities and Social Sciences (CHUSS). Prospective graduands were seen walking from corner to corner of the faculty of Arts building. In 2018, Makerere imposed a mandatory fee of Shs 98,000 on each student for a patented gown. Unlike in previous years, students are expected to only use the exclusive graduation gown.

Nawangwe blames the late distribution of the gowns to the late supply by the contractor who he says demanded for advance payment, which wasn’t done in time.

"The contract that we have with the supplier is that we shall pay after the gowns have been delivered. That means that the supplier who has been appointed and we have a contract with him which still runs I think for another two years - the contract says you supply and we pay. The assumption which was made by the contracts committee, they must have checked because there were many people who applied that the supply has the capacity to make these gowns and wait for payments. So we’re ourselves asking questions why did you have to wait for an advance which is not even in the agreement before you can supply? But we’re going to handle that."

Those students abuse the gowns by roaming the streets of downtown Kampala in them Just to show off.

Like the white coats worn by those posing as medical students.
Report to administrator
+1 #2 rubangakene 2020-01-10 00:17
I told you that these so called "professors" have no brains.

What they should do is to import these gowns from China cheaply rather then buy from Ugandans (even USA flags are made in China cheaply!) and then just rent them every year at times of graduation and returned same day, simple economic logic.
Report to administrator
-3 #3 karemire 2020-01-10 10:40
Quoting Lysol:

The gowns should only be worn during graduation.

Those students abuse the gowns by roaming the streets of downtown Kampala in them Just to show off.

Like the white coats worn by those posing as medical students.

I see no problem with that roaming, just like wedding gowns too get out of the churches into the streets.

If there is anybody who does know what a real KIFULUKWA looks like , that is IT in the photo above

There they are , young and fresh "intellectuals", in a queue to collect shinny gowns made in China , yet the universtity walls above and around them have never been repainted since my grand father , my father and I left the place.

Just look at that photo ladies and gentemen ; what you see is what used to be one of the best universities in Africa.

The walls are bleeding while the so called leader is walking and walking endlessly like Forest Gump
STUPID STUPID STUPID
Report to administrator
0 #5 MuwangaTheUgandan 2020-01-10 21:39
Quoting rubangakene:

I told you that these so called "professors" have no brains.

What they should do is to import these gowns from China cheaply rather then buy from Ugandans (even USA flags are made in China cheaply!) and then just rent them every year at times of graduation and returned same day, simple economic logic.

Hello Rubangakene, this simple logic is good but we should remember 2 things.

1. The US econ. is very strong and their balance of trade with China is close to acceptable. With Uganda things like gowns upset the already unfavourable balance of trade which spells doom for the Uganda economy.

2. The US manufacturing sector is strong. Ours is not. If we cant even "manufacture" gowns we are in trouble.

Especially given the nature of our capitalist econ. where money shld trickle down.I think this gown business for Ug is a way of allowing money to trickle down and prop up the economy.
Report to administrator
0 #6 miki 2020-01-10 21:42
What a rotten place this seems to be? No wonder the products of such places are no less rotten themselves.

On the issue of gowns why should Makerere Univerity sell gowns (whether directly or indirectly through a contrived monopoly owned by a member of the first family)?

The institution should just issue guidelines on what the preferred gown should look like so that the students source them from wherever and whenever.

The way the members of the first family do business is to use instruments of state to aggravate and create a monopoly of that market for themselves - look what they did with tiger head dry cells, the chinese tires, the refridgerators, the computers, and now the used cars.

observer journalists should go out and do deep investigations on who owns these businesses where monopolies are fradulantly created for individual companies. Also find out if these companies pay any taxes!
Report to administrator
0 #7 Wooden K. 2020-01-11 12:08
Miki , you left out the pharmancy business .
Report to administrator
+1 #8 miki 2020-01-12 07:37
Wooden K.
That is why the majority of businesses run by the Museveni family and their cronies cannot survive once they are out of power.

And that is why these people will do everything to keep power to safeguard their privileged position.

The problem is that Ugandan journalists are too lazy to go and investigate what is certainly the biggest scandal in Uganda today.
Report to administrator