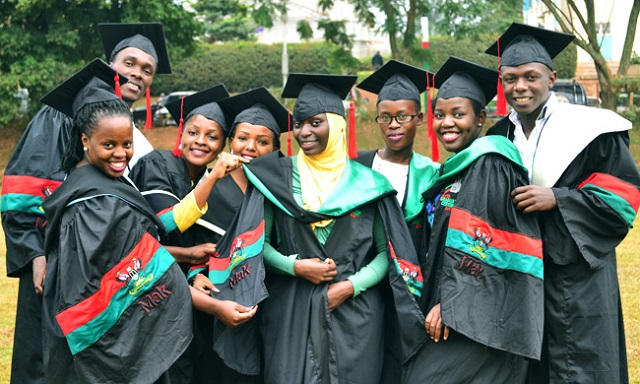 Makerere graduands at a previous graduation

Makerere University has received from China the first batch of graduation gowns for the 70th graduation ceremony scheduled for next week.
The university authorities confirmed the arrival of 7,000 graduation gowns out of the more than 13,000 required for the 13,509 graduands.  The academic registrar Alfred Masikye Namoah in a report to the university ceremonies committee today, confirmed the arrival of the gowns.
Team Uniform Limited, the firm contracted to exclusively supply the patented graduation gowns opted to tailor and import the graduation gowns from China following frustrations by local suppliers and intrigue within the university. Makerere vice chancellor, Prof Barnabas Nawangwe had previously expressed concern at the customs officials who were delaying to release the gowns from Entebbe airport.
Masikye has now instructed all college and school registrars to report to the central stores to collect the gowns for the graduands in their respective colleges.  To avoid commotion, the gowns are to be distributed to all graduands at their respective colleges.

NON PAYMENTS
Team Uniform which has had its own supply challenges, has written several letters to the officials in charge of the ceremonies complaining over non-payment for graduation gowns introduced in 2017. Ahead of the 67th graduation ceremony in 2017, the customised gowns run out of supply, with the contractor only managing to supply about 7,000 gowns out of the 14,000 that were needed.

The institution in 2018 adopted a mandatory fee of Shs 98,000 paid by all students for the patented graduation gown. Going by the number of graduands this year, the university collected at least Shs 1.3bn from students for the gowns. Unlike in previous years, students are expected to only use the exclusive and specially designed Makerere gown at the graduation ceremony.
Each year, Makerere University spends about Shs 770 million as graduation costs. The delays in procurement and payment of the contractor are contained in a report of the 69th graduation ceremony. According to the May 2019 report, Makerere experienced challenges last year in issuing the gowns and hoods despite early distribution. As opposed to the current dilemma, the exercise in the last graduation commenced in December through early January.

“The service provider reported experiencing challenges in securing his payment indicating that he had produced over 10,000 gowns without advance payment. He explained delays in production and distribution of hoods and the resultant commotion in these delays. This payment should not go to the consolidated funds since it belongs to a business,” says the graduation ceremony report.

Graduands who started reporting to the institution have been receiving only invitation cards and car stickers. The institution says it will start issuing graduation booklets tomorrow. The first students to graduate in the 4-day event on January 14 are students from the colleges of Agricultural and Environmental Sciences, Natural Sciences, Education and External Studies and Health Sciences.

January 15 will see students from the colleges of Business and Management Sciences, Computing and Information Sciences and Veterinary Medicine, Animal Resources and Bio-security graduate with their degrees or diplomas. Makerere University Business School (MUBS) students will graduate on January 16.

The final day will see graduands of colleges of Engineering, Design, Art and Technology, Humanities and Social Sciences and School of Law also graduate.

"Ekifulukwa" mean an abandened house/ hut/ home/ building . --no owner .. anybody can do whatever they want in there.

In Buganda , a home / hut or house become akifulukwa after a catastrophy has forced everydody to abandon it.

For almost 60 years , Uganda has been philosophically an abandoned house/ home. That explains why all these things are happening. Every skunk claims the right to stink, every pimp does what pimps do.
Report to administrator
0 #12 rubangakene 2020-01-10 00:27
Quoting Jasper!

If you have the "brain to graduate", why didn't you think of this before and designed your own?
Report to administrator
+1 #13 miki 2020-01-12 08:00
Most comentatators here have never understood how Mr. Museveni's Mafia outfit works.

They swoop in an hijack a sector, manipulate and use insitutional or state instruments to aggregate a mass market, then form a monopoly with them as the sole owners of that market.

For the lousy business people they are, a forced monopoly is the only way they can be in business.

Check all the other sectors where this has happened, and check out the individuals behind those contrived monopolies.

It is always members of the first family or their proxies. If anything exists outside their gambit, they will either move to co-opt or destroy and replace it with their own. The issue of the gowns in Makerere is only the tip of the evil horn.
Report to administrator
12