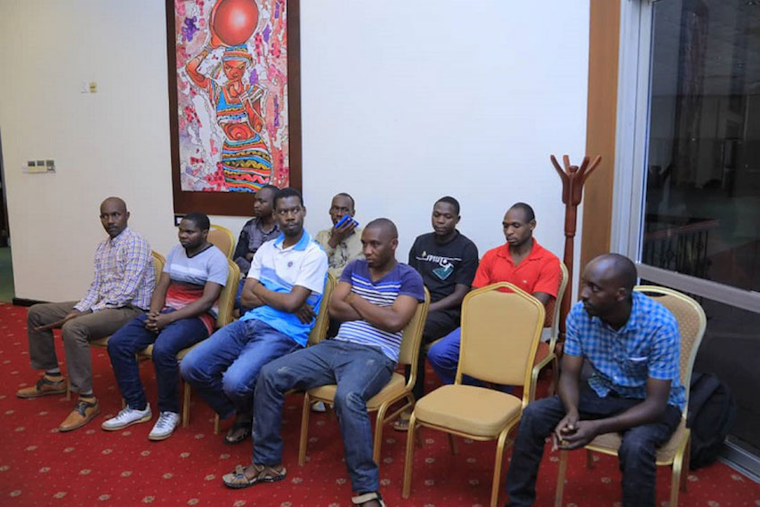 Uganda has today handed over the nine freed Rwandan nationals arrested between 2017 and 2018 in Kampala and Mbarara.
The nine, who had been charged with illegal possession of firearms in the General court martial include Rene Rutagungira, Bahati Pacifique Mugenga, Emmanuel Rwamucho, Augustine Rutayisire, Charles Byaruhanga, Etienne Nsanzabahizi, and Claude Iyakaleme.
They were freed on Tuesday on grounds that the Uganda government had lost interest in the case. Their release came a few days after Rwanda had called on Uganda to release all Rwandan nationals incarcerated in Uganda and President Museveni promising to work on ending the tensions between the two countries.
Tensions between Rwanda and Uganda hit sour high when Rwanda closed its border in Gatuna in February 2019, accusing Uganda of harbouring and facilitating dissidents plotting to overthrow President Paul Kagame's government. Likewise, Uganda accused Rwanda of infiltrating its security agencies including the internal security organisation, police and army to carry out espionage activities.
Speaking to journalists at Serena hotel in Kampala today, Foreign Affairs minister Sam Kutesa said Uganda dropped charges as a gesture of goodwill, to ease tensions between the two countries. Kutesa said dropped charges don't prove the suspects' innocence and that the charges can be reawakened.
Kutesa said the decision to release the Rwandan nationals was a result of a recent visit to Rwanda by ambassador Adonia Ayebare as Museveni's emissary to President Kagame. He added that Rwanda had sent a list of its nationals believed to be in detention but added that many of those on the list had been already sent back to Rwanda.

Kutesa, who didn’t divulge details of the message that Ayebare carried, said Uganda hopes and expects Rwanda to reciprocate the gesture and sort all the outstanding issues between the two countries so that normalcy returns.

Rwanda High Commissioner to Uganda Maj Gen Frank Mugambage said the suspects are innocent because they were arrested on trumped-up charges.
He said that although the suspects' release is welcome, Rwanda is still concerned that many other Rwandans are still locked up in Uganda on fictitious charges. He demanded that these, too, should be released unconditionally.
Rwanda's minister of state for East African Affairs Olivier Nduhungirehe believes that there are more than 100 Rwandans incarcerated in Uganda.

So is Rwanda the boyman now? Uganda always crates an imaginary enemy to frighten its citizen.
Report to administrator