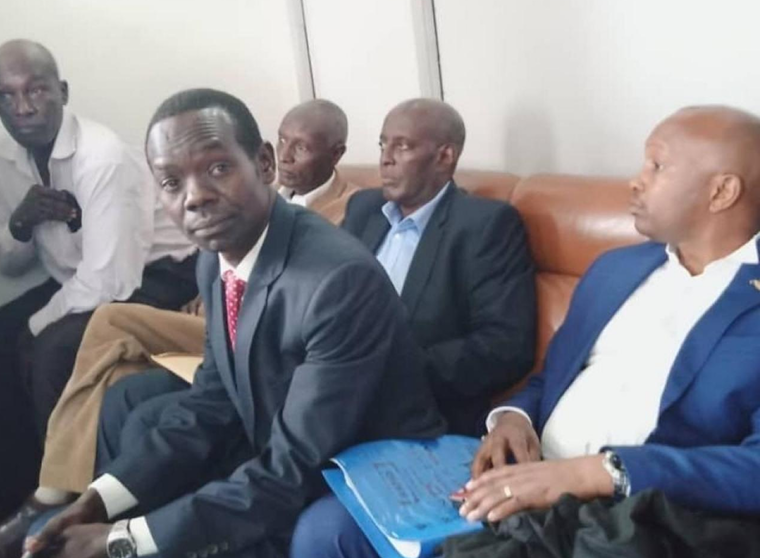 The convicts in court last year

Sam Emorut Erongot the reported missing convict and the former commissioner in charge of policy and planning in ministry of Local Government has surrendered himself to authorities in Luzira prison to start serving his 13-year jail sentence.

Erongot was convicted together with John Muhanguzi Kashaka, Henry Bamutura, Adam Aluma, Robert Mwebaze and Timothy Musherure for causing a financial loss of Shs 4.2 billion to the government after misappropriating money meant for the purchase of bicycles for Local Council leaders across the country.

Government had planned to purchase 70,000 bicycles for LC and parish chairpersons ahead of the 2011 general elections. But Erongot and his co-accused contracted a sham company, Ammam Industrial Tools and Equipment Limited (AITEL) to purchase the bicycles in India.

In a conviction judgment passed slightly more than five years ago, justice Catherine Bamugemereire highlighted that the company which was awarded the contract to supply the bicycles was non-existent. Bamugemereire referred to the directors of AITEL as rogues and conmen, noting that their supposed firm was formed purely to facilitate fraud.

As a result, Erongot was jailed for 13 years, Kashaka, the former permanent secretary of the ministry of Local Government and Henry Bamutura, the former principal accountant were jailed for 10 years. However, the convicts challenged the sentences describing them as harsh and not valid in law.

But the same sentences were upheld by the Court of Appeal last month, sending the three officials to Luzira prison to start serving their punishment. But by the time the court registrar, Dr Agnes Nkonge finished reading the judgment, Erongot, who had spent five years out on bail had disappeared. URN has since learnt that Erongot took himself to Luzira prison a few days after he was reported missing.

The spokesperson of the Uganda Prisons Services Frank Baine confirmed that Erongot is in their custody in Luzira and that their records never captured him as a missing convict because he returned to prison on the same day, his colleagues were returned to serve their respective sentences.

+1 #1 WADADA rogers 2020-01-07 13:10
It hurts, the small fish are arraigned in court, convicted and sentenced yet the real guys who ate the money are somewhere having a blast, talk of a sacrificial lamb
Report to administrator
+1 #2 WADADA rogers 2020-01-07 13:16
He is a fool, he should have fled out of the country as a fugitive, it is better than Ugandan prisons while the real thieves who used him to take the money are serving Government as ministers is meaningless
Report to administrator
0 #3 Ekelot 2020-01-08 11:40
These people are guilty of crimes ranging from causing financial loss to neglect of duty.
However

Bank of Uganda was paid Shs 100 million as commission on this payment but despite the fact that They found discrepancies, they still went ahead and paid

The Ministry of Local Government had problems of capacity in managing letters of credit and international trade.

There was pressure to deliver these bicycles before elections; virtually a bribe! Was this the reason due diligence failed?
Stanbic Bank blamed the Central Bank for failing to detect the forgeries
that the Accountant-General cleared payment after Bank of Uganda had authorized payment to AITEL on the 15 April 2011.
Report to administrator
0 #4 Mubiru 2020-01-08 19:02
Elections in Uganda are not only a sham but a facade to dupe the ignorant world.

They are used to benefit the connected thieves and if all thieves did an Erangot prisons would be filled beyond their capacity.

By the time these brigands leave prisons their loot of billions will have produced them interest on which they will depend until they die.

Jailing the thieves without confiscating their loot and property, benefits nothing the unconnected population in perpetual poverty. Jailing looters is just a slap on the arm and will never stop endemic stealing.
Report to administrator