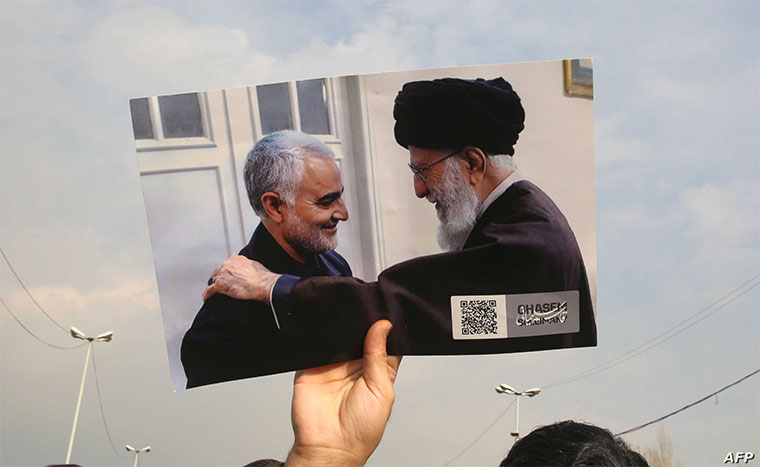 A man holds a picture of Iran's supreme leader Ayatollah Ali Khamenei with Iranian Revolutionary Guards top commander Qasem Soleimani during a demonstration in Tehran, Jan. 3, 2020, against the killing of Soleimani in a U.S. strike in Baghdad

Africa could emerge as a venue for a confrontation between the U.S. and Iran as Tehran threatens to retaliate after the U.S. airstrike that killed the Iranian Quds Force commander, General Qassem Soleimani.

Iran has sought to increase its influence in certain countries in Africa in recent years through activities such as arms sales, training fighters for combat in the Middle East and funding Shia sects. It also has significant trade relations with several countries, including South Africa.

Phillip Smyth, a Soref Fellow at The Washington Institute who studies Shia Islamist militarism, said that he does not necessarily expect the Iranians to strike immediately. He noted that they have historically been cautious and look for what he calls “plausible deniability” to avoid detection when they attack.

When they do strike, he said, it is possible they will look for a soft target in an unexpected location.

“The Iranians are going to want to show that they have influence on a global scale and they may look for low-hanging fruit or easier targets that they can go after,” Smyth said. “And that may very well occur in Africa. And it could very well occur in North America or Europe or in many other places,” he said.

Smyth said Hezbollah, which is supported by Iran, has recruited and trained Nigerians for years. A 2018 report by the Middle East Institute said Iran had instructed Hezbollah to increase its training of Nigerians and hoped to use Nigeria as a base of operations to launch attacks and “thwart Israeli and Western ambitions in the region.”

There have also been West African fighters who, after converting to Shia Islam, travelled and fought alongside Iranians in Syria. Iranians have similarly supported fighters from other parts of the world to join them in various conflicts.

“There are tens of thousands of fighters that the Iranians have mobilized and used for conflicts in Iraq, in Syria and in Yemen. They have a very strong alliance and kind of proxy relationship with Ansar Allah, also known as the Houthis. So they have quite an extensive presence and they have continued to try and grow that presence,” Smyth said.

A June 2019 report by the British newspaper The Telegraph said that Iranians were setting up terror cells in Africa under Soleimani’s direction. The paper reported that Iranian cells may be active in Sudan, Chad, Ghana, Niger, The Gambia and the Central African Republic.

However, Ryan Cummings, director of Signal Risk, an Africa-focused political and security risk management consultancy, said there is no evidence to date that Shia groups in Africa pose a threat to the U.S. or the West.

“Groups which have a distinct Shia theology — and which would place them in the orbit of Iran — have demonstrated no intent to carry out acts of violence against U.S./Western interests on the continent despite suggestions that they have embedded in these countries for several years,” he told VOA in a written statement.

Much of Iran’s engagement on the continent is less ideological and more profit-driven. One favoured outlet has been weapons smuggling. A 2013 Conflict Armament Research report found Iranian bullets in 14 locations across nine African countries. At the time, the group said Sudan was partnering with Iran to funnel the ammunition to African armed groups.

“There’s actually a whole issue over the past couple of years of Iranian ammunition winding up throughout Africa,” Smyth said. “I mean from east to west. And it was rather interesting how these weapons systems and also the ammunition was arriving there.”

Smyth added that, in some cases, weapons are sent to Somalia, packed in wooden ships known as dhows and then smuggled across the Red Sea to Houthi fighters in Yemen.

Iran has also sought to exert influence on the African continent through religion. One prominent example of this is the Shia sect the Islamic Movement in Nigeria and its controversial leader Sheikh Ibrahim El-Zakzaky. The group has been charged with inciting violence and El-Zakzaky has been imprisoned and formally accused by the Nigerian government of trying to form an “Islamic State in Nigeria” with the backing of Iran’s Supreme Leader Ayatollah Ali Khamenei.

Although Africa does not appear to be a focal point of the emerging conflict between Iran and the U.S., that could change. Smyth noted that al-Qaida linked groups historically sought to attack U.S. interests in Africa, viewing it as a more favourable operating environment for terror groups. This occurred in the 1998 embassy bombings in Kenya and Tanzania and a 2002 attack against an Israeli-owned hotel and a failed attempt to shoot down a passenger jet taking off from Mombassa, Kenya.

“People will look at the continent and say, ‘Can we smuggle weapons in, are there populations there that we can target, do they have lower security, how is the connection that goes back to, let’s say, the Israeli, or back to the Americans,’“ Smyth said.

He added that Iran will not want to damage its own trade and diplomatic relations in Africa but it will look for ways to make a loud and, possibly violent, statement.

“They don’t want to harm their other interests in the continent. However, I believe, if push came to shove, and if they really thought it would be a good place to get their revenge, they may actually pick the continent to do it on,” he said.

We end up inviting extra, sophisticated problems for us, for what, the odd dollar here and there? Aim to build real peace at home before falling headlong into unknowns!
Report to administrator
-1 #2 MR 2020-01-07 00:00
This article states illegal terrorist activities that have been on going/supported by Iran within Africa which naturally Africa needs to fight against.

The same can be said about U.S efforts in backing puppet regimes in Africa. So in short this article talks nothing about What Africa has to do with the U.S - Iran conflict
Report to administrator
+1 #3 Lysol 2020-01-07 00:19
The ball is at Iran's corner It may just be calling a bluff.

They are very many sentimental people over their, who use elaborate and colorful language . Many Diaspora Iranians are actually celebrating. .

Africa has always been a center of soft targets because of many the corrupt leaders, so that may be expected. On the other end, there might be nothing Iran will do.
Report to administrator
0 #4 WADADA rogers 2020-01-07 00:26
America and Americans all over the world think they are well protected but what arose out of Sept 11 is a tale for another day or for history to judge.

For some of us who are prayerful, we look forward to an attack on Americans or their installations, Trump needs to rethink his arrogance and to redirect his anger.
Report to administrator
-2 #5 WADADA rogers 2020-01-07 00:35
The say when two elephants fight, it is the grass that suffers, lets watch and see who will laughing last if we are not indirectly calling for a forth world war using Africa as a base
Report to administrator
+1 #6 Lysol 2020-01-08 00:22
Wadada Rogers
Irian is not an elephant. It's like the orange and apple comparison you're trying to give. How about an elephant and mouse, here/
Report to administrator
0 #7 Lakwena 2020-01-09 14:52
Quoting Lysol:

Wadada Rogers
Irian is not an elephant. It's like the orange and apple comparison you're trying to give. How about an elephant and mouse, here/

In other words Lysol, not many people know what America is made of!

E.g., if you antagonize Americans, they will always take the conflict/wars and destruction to your doorsteps with so much ease and walk away with a swag gar.
Report to administrator