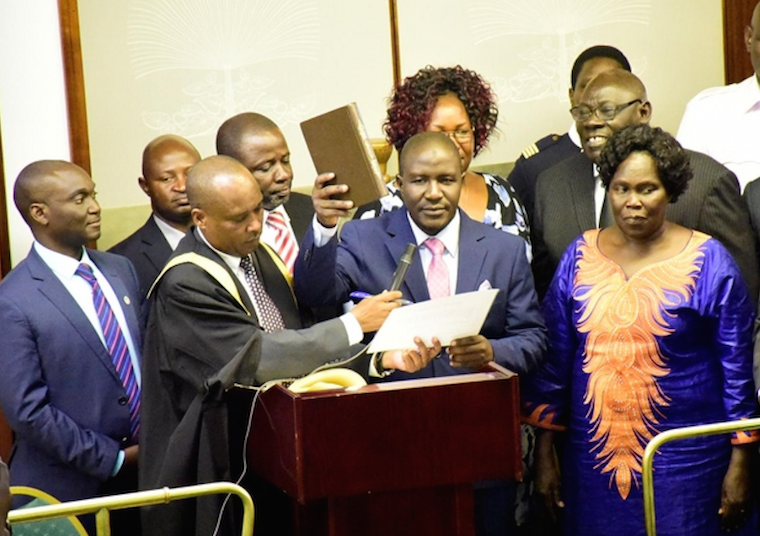 In a stunning ruling last week, the Constitutional court said the six MPs representing the new municipalities were elected illegally. In essence, the court ejected the MPs from parliament months after their inauguration.

Five justices of the Constitutional court led by Christopher Madrama, Alifonse Owiny-Dollo, Cheborion Barishaki, Kenneth Kakuru and Egonda Ntende ruled that municipalities created in the middle of an existing term of parliament can only elect MPs at the next general election.

In an interview with The Observer, Basalirwa says the judgment has some merits that ought to be taken. He maintains however, that it was wrong for court to issue orders without hearing from the six MPs.

What was your initial reaction when you heard this judgment?

I was mesmerized because honestly speaking I didn’t know there was a case like that. It took me by surprise. I was at a burial in Bugweri and I got the information on WhatsApp; I didn’t get the judgment until later in the night.

So, what do you make of the case?

It has got very interesting revelations on the role of parliament and the Electoral Commission [EC] in the creation of electoral areas. I think the Constitutional court has given guidance on how constituencies and municipalities should be created and when elections should be conducted.

In the wisdom of the Constitutional court, there cannot be midterm elections arising out of the creation of new electoral areas. Midterm elections can only be held when there is a vacancy calling for a by-election. In the understanding of EC and parliament, once a municipality has been created, it therefore follows that elections must be conducted in that area there and then.

Away from Basalirwa, the victim, is there merit in the arguments of the court?

There is merit in the judgment but of course there is also a different perspective. You need to read the judgment to understand the arguments of the attorney general and the EC. They are very valid.

If, for example, a municipality has been created, the practice usually is for the sitting MP to either remain in the old electoral area or to shift to the new one. If they shift, the old area remains unrepresented for the remaining time. What then happens?

Then you concentrate the effort on where you have chosen to remain. For example, the woman MP for Iganga doesn’t represent Bugweri, because she no longer has interest there.

It’s important for parliament and the EC going forward, to stay away from creating electoral areas in the course of the term. That way, you are creating certainty and the best way of complying with the decision of the court.

What next for you now?

I have consulted my colleagues and we want to go back to the Constitutional court, not necessarily to challenge their decision but to express our desire to be heard on a number of issues.

Number one; our opinion is that whereas the Constitutional court justices decided the way they did, ordering us to vacate parliament, in our view, offended some provisions of the Constitution because our understanding is that once a person has been elected and sworn in, whether the constituency existed or not, whether the election was illegal or not, he/she can only be removed through an electoral petition through the High court.

I’m not so sure the Constitutional court addressed its mind to that issue. We are now looking at another window where somebody can vacate their seats in parliament through a constitutional petition.

But our view is that having found that midterm elections were unconstitutional, the matter should have been referred to the High court that has jurisdiction on matters relating to membership.

I’m very sure if we had been parties to that suit, the arguments we are raising now would have been brought to the attention of the court and perhaps their judgment would have been different.

But there was a case where one MP was sued for contesting in the NRM primaries yet he was in parliament as an independent. The judgment didn’t stop at him; it extended to all those in similar circumstances. The MPs argued that they were never heard but, nonetheless, they lost their seats…

They never sought a review we are seeking or an appeal. In this matter, we are completely disconnected from blame. If the principal legal advisor is saying here is a vacancy created by another agency of government and another body advertises a vacancy and I offer myself to participate, how am I to blame?

Are you saying it’s right to sentence somebody unheard? Simply because somebody sat on their rights, does that make it right? I Basalirwa I’m not going to sit on my rights.

What basis are you going to lean on to challenge this?

On the law, the Civil Procedure’s Act, section 82, says that any person aggrieved by a decree or an order passed by court may apply to that court to have it reviewed and it gives reasons.

A review is not as solid as an appeal; the judge might choose not to allow your application…

I will go to the Supreme court because their decision is appealable. Whatever I want to do is based within the law. The appeal is a right only available to the parties and I have no control over it.

Do you see the EC or the Attorney General appealing this decision?

My path is not dependent on what the EC or the Attorney General does. I’m taking an independent path provided for under the law. Whether they appeal or not, I will seek a review.

In the past we have heard the EC complain about creating electoral areas yet they normally don’t have the money.

But I don’t think their not appealing will be saving some money because somebody can sue them for misleading them and wasting their time. By not appealing, they will have conceded that they made a mistake. You never know what damages court can award.

Basalirwa, the politician, how does he look at the judgment?

You don’t discuss spirits here, you discuss the law.

Before I became an MP I was an officer of court and I’m still one. I have an obligation to respect decisions of court.

Well they do, but if they do, they usually do it legally. But sometimes it’s people’s perceptions that make some judgments political.

Otherwise, a judge who has taken a judicial oath will stick to the dictates of the law. Whether that’s what is working is another matter. But the duty is on the office holder to continue respecting the oath they took.

But the law moves together with the political environment…

Now you want to say that the judgment was political?

What about the timing of the delivery? The courts were on holiday…

I’m asking the same question and I think the best person to answer is the judiciary, which has a spokesperson. But there is no law that stops them from issuing a court decision during vacation.

If the law exists then they are in breach and if it’s not, then they are not in breach. How are you going to blame them for doing some things the law allows them to do? Can you blame someone for being naked in a bathroom?

In the event that this judgment is upheld, what would be the damage for you?

You see 2021 is around the corner. It will be fortunate that they will have sent me to the ground early enough. I have been in politics for a very long time and this was my fifth time to contest; resources have never been my problem.

I normally use just about 20 percent of my personal resources; my friends have always been mobilizing resources for me. They are willing to do it again.

You have been one of the people arguing that elections can be used to oust President Museveni from power. But this judgment shows that winning an election is not a guarantee that you will have power…

It’s not yet over; you’re creating an impression that the Constitutional court has the final say in these matters; it’s not. It’s premature to pass judgment now.

It’s until the Supreme court passes a judgment that you can talk about the process being complete. We are still in the middle of the journey.

I have told you about what I’m going to do. I know in some political matters you can’t get answers from court but in others you can and this is one that we think can be resolved through the court.

In parliament we saw the speaker decline to implement some court orders against rebel MPs. What do you see Kadaga doing?

I can’t predict what the speaker will do but I know she will be guided by the law. She’s one of the most accomplished lawyers that this country has.

0 #1 WADADA rogers 2020-01-01 12:29
The MPs are just buying time to stay in parliament longer, by the time the review is fixed and heard, we shall be in the month of August, then depending on the out come, each party can proceed to the Supreme court where its decision will come out after the term of office is expired
Report to administrator
0 #2 Hassan Bulesa 2020-01-02 19:40
I like the kind of legal brain Hon. Basalirwa always show case when it comes to legal battles, he is the person am looking to as a role model in the practicing field, looking forward to being like him after professionalizing my career