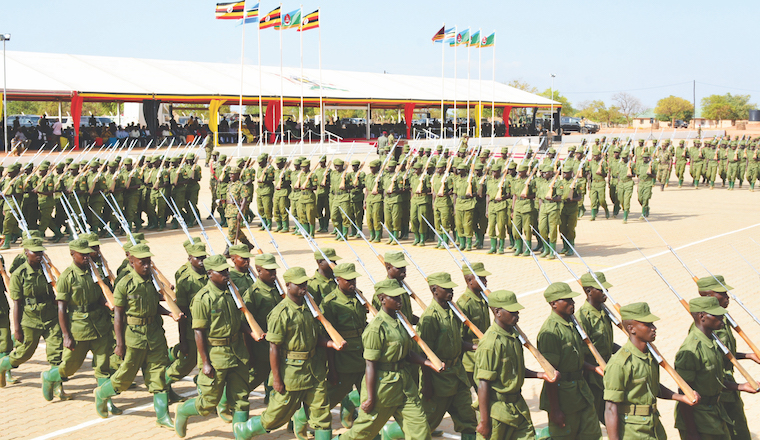 In his quest to bring order to the chaos and unrest in the capital Kampala, Colonel Felix Abucha, the deputy commander of the Local Defense Units [LDU], has ordered his legion of appendages to the military to shoot and kill any suspected robbers.

Speaking recently at a village security meeting in the Muyenga suburban gated community, the colonel’s marching orders to the LDUs were very clear: “We want a very free Kampala, we want our people to enjoy peace throughout and for us we are not like the police sincerely speaking; we fire to kill, if you want to steal, you will die; sincerely speaking we shall kill you. We are here, we shall kill you. Whether you are our friend, whether you are with us in uniform but we get you stealing, we shall not spare your life, we shall take your life and that’s the order; people should know that.”

The plain-spoken order seemed to have heartened his audience of area residents. They wildly applauded the tough-talking Abucha. Police, residents claim, has struggled to impose order in the upscale suburb and Abucha is determined to restore order.

Abucha’s very public threat was first aired on BBS Terefayina, a Buganda kingdom-owned television station. Recently four people were shot and killed in Muyenga in a botched robbery. Residents in the area claim the visible police presence in the area has not helped curb crime.

The cold-blooded killing of the suspected robbers seems to have elated Abucha.

“We have started and you have seen on television. For us we shoot to kill. We are not breaking people’s legs. We shall shoot to kill; the head and the chest are our target. If you play around with our Ugandans, we shall kill you. If you prepare to come and steal at night, you will lay down in your blood…” he said, adding, “Kampala is metropolitan because it’s not only Baganda who stay here, all tribes, all colour of people in the world are in Kampala. We are here to protect everyone regardless of where they come from.”

He said LDUs were shipped into the area to support the police but were disappointed when police officers abandoned their work.

“When there is a mistake, we have to stay together to solve the problem with the people. If among us there are bad people, tell us. For us we are not like the police we fire to kill, if you want to steal you will die,” Abucha said.

This order is replicate of the 2002 ‘Operation Wembley’ work method in which security personnel shot and killed suspected robbers on sight. The method once condemned by human rights activists was introduced to counter armed robberies that were on the climb then.

Police then instructed its crack unit – Flying Squad - to deal with robbers in an effort to break the back of suspects behind organized crimes especially in Kampala and its suburbs.

The recent deployment of LDUs and street cameras gained much traction in the wake of a spate of violent murders in 2017 and 2018 of prominent personalities in the country including Muslim clerics, the Assistant Inspector General of Police Andrew Felix Kaweesi, Assistant Superintendent of Police Muhammad Kirumira and former Arua municipality MP Ibrahim Abiriga. However, ever since they were deployed, the LDUs’ flaws have become all too clear.

They are trigger-happy and have been cited in several human rights violations including torture of suspects. Interviewed for a comment on the shoot-to-kill order, Army spokesman Brig Richard Karemire said, “I have seen the message going around but he [Col. Abucha] was directing his message towards potential criminals who want to deny our people peace during this festive season. If you tell a potential thief that if you come and conduct a robbery I will kill you, it’s a good message for those potential criminals…”

“If you are a peace-loving Ugandan, there is no need to worry about what he said. Forget about the law; he was sending a deterrent message to criminals. If you get armed robbers in your house, you use everything you have. How would you handle an armed robber who has invaded you; do you pull out your rosary and start praying or you use your panga? We really don’t have kind words for such reckless and ruthless armed criminals who come to disturb our people…” he said.

The army said the recruitment was meant to, “…enhance the existing foundation security arrangement in the country to ensure the people and their property are secured at grassroots levels.”

The recruits underwent a four-month basic military training and upon completion, they were deployed to serve in their respective districts of recruitment.”

One day Museveni will answer for all his atrocities. Beware what you wish for. The same guns may be turned onto you.
Report to administrator
0 #12 Kirya 2020-01-03 02:17
Order should to kill all those who are corrupt and caused financial lose to the country created a large underclass of un employed youth.
Report to administrator
0 #13 Wainanchi 2020-01-03 07:50
@Odonkara-- Target for what? Because I support law and order and security for all and you advocate terrorism!!I hope you dirty beggar will meet your destiny with bullet or finish in jail!

Do you now what you are advocating and supporting?If you dare to tell this n public , that you support terror you would be immediately arrested and put in jail!!Are you on of them and scared that you will meet your Maker??
Report to administrator
+1 #14 rubangakene 2020-01-03 23:04
"When in doubt, leave no doubt." Does this order to shoot also include those who you suspect of corruption cases that are rampant but "not visible" to these ignorant, gun-totting goons?

If so, Ugandans will have nobody left alive. Even the LDUs will become so "patriotic", they will start shooting themselves in the heads! Nobody is an angel Colonel Abucha!
Report to administrator
12