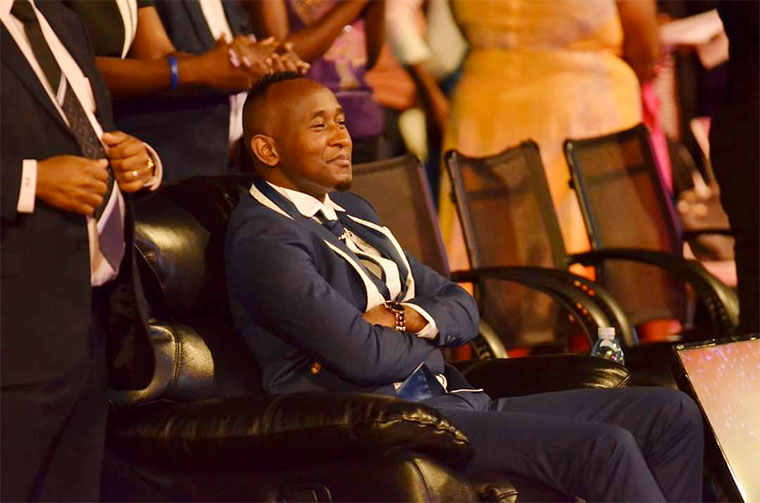 Flamboyant born-again preacher, 'Prophet' Elvis Mbonye has threatened to take individual police officers to court over what he calls persecution and violation of his fundamental human rights.

In a letter dated November 21, but received on December 9, through his lawyers of Walyemera & CO Advocates, Mbonye says his continued appearance at the police criminal investigation department to renew his bond is not only inconveniencing but also a breach of his rights.

On October 17, Mbonye was summoned by police on allegations that he had used his Facebook account to urge parents not to take their children for immunization in the recent countrywide exercise against polio, measles and Rubella.

This, police said was contrary to section 23 (1) of the Immunization Act 2016. At the time of the summons, Mbonye was unable to appear in person because he was out of the country. He instead sent his lawyers to represent him.

When he returned, on October 28, he went to police and recorded a statement in which he revealed that his official and only social media communication channels were in different names.

“It was categorically clarified that Prophet Elvis Mbonye is not Mugisha Elvis Mbonye who’s alleged to have authored the social media post,” Walyemera’s letter addressed to CIID director Grace Akullo reads in part.

It adds that having declared that the account wasn’t his, this would have meant the closure of the file. However, the letter adds that instead, Mbonye has been subjected to numerous unnecessary, unending and disrupting appearances at the CIID offices to fulfil his police bond requirements.

“We take the firm view that the inquiry and investigations into this otherwise straight forward matter is unreasonably and deliberately being delayed. It’s quite absurd that while Mbonye’s Facebook communications channel is widely known, the investigating officers deliberately and strategically choose to be mistaken concerning his identity,” the letter says.

It adds that this unrestrained and unprofessionalism is what on several occasions has led to many wrongful arrests and malicious prosecution that leads to costly claims and awards against government.”

In the letter, Mbonye also castigates investigating officers, who, he says have not been forthcoming on the progress of the investigations and his continued appearance at police.

“Measured complaints to the investigating officers on the matter have often been dismissed with an aggressive display of power characterized by among others threats of arrests. We therefore urge and call on you as the head of the CID to intervene in this matter with a view of concluding the now protracted police investigations,” the letter says.

Speaking to the press, Dan Walyemera, Mbonye’s lawyer, said they have given police up to December 13 to respond to their concerns or they take action.

“We are going to take these individual police officers to court for persecuting prophet Mbonye. You know we have a very good law now which can deal with these officers who are disrupting the movement of a law-abiding citizen,” Walyemera said.

Let him wait till the investigations are over, after he has been exonerated of the crime in court, then he can sue the police. But at this stage, it looks like he is out more for sympathy than proving himself innocent.

Even "prophets" have to adhere to the machinations of the law. Mbonye, wait for your time in court and prove the police wrong.
Report to administrator
+2 #2 ivan philip 2019-12-12 22:50
I think this is an inconvenience to any law abiding citizen and as such should stop with immediate effect.
Thank you
Report to administrator
0 #3 Lakwena 2019-12-13 08:02
If this Prophet Mbonye is a prophet worth a name; since when have prophets sued state authorities (Caesar)? Except his self-importance, has it crossed Mr. Mbonye's mind e.g., what would Jesus have done in his case/situation?

In other words, "If you must break the law, do it to seize power: in all other cases observe it", said Julius Caesar.

Because of that; Jesus told his audience, when e.g., one of the mischievous Pharisees was tricking him into breaking the law on taxation, to give to Caesar what belongs to Caesar and to God what belongs to God.

Otherwise, if he can't love and/or forgive his enemies like Jesus did, the Mbonye of this country are nothing but a bunch of con artists/tricksters ripping off unsuspecting and desperate countrymen and women.

Lock him up!
Report to administrator
+2 #4 Concerned Ugandan 2019-12-13 09:45
Funny how the 'prophet' who would have so many kneel at his feet in adoration of his 'demi-god' status is now issuing threats through lawyers.

If he is as all-knowing and powerful as he would have us all believe then let him await the outcome of investigations!

He has not been detained or curtailed in his movements in any way! It also speaks volumes about the quality of his lawyers if they imagine that they can sue police officers in individual capacity in the lawful execution of duty!
Report to administrator
+1 #5 MR 2019-12-13 22:35
For a prophet that should be teaching the ways of the Bible his not following any of them.

The Bible talks about talking to those that wronged you and only use courts as last resort. Also about forgiving and turning the other cheek.

But instead his walking the path of an opportunist that wants to get money not justice along with his followers.
Report to administrator
+1 #6 Lysol 2019-12-13 22:56
Self imposed prophet. What a joke. There are many of them in the country with fake churches, just to make money.

Never give your money to such people and don't listen to their distorted preaching of the Bible. The Pentecostal is one of them. The youngsters or the youths should be careful. The devil always works in a mysterious way.
Report to administrator
0 #7 rubangakene 2019-12-13 23:24
These so called businessmen dressed as the "facilitators of heaven" are a disgrace to our society.

They "loot" the little money from vulnerable 'wananchi' to feed their lusts and the good life, a life they haven't worked hard for. Where did they all suddenly come from, eh?

These failures, some without proper education and decent upbringing using the confused state we are in. Look what happened to Bishop Deya from Kenya; he is now incarcerated at the notorious Kamiti Kenya prison emptying his "own buckets".
Report to administrator
0 #8 WADADA rogers 2019-12-14 14:40
What makes him think he is special, many Ugandans are subjected to such unfair treatment but nobody says a think including people who call themselves men of God or god yet they self appointed spokesmen for the people
Report to administrator