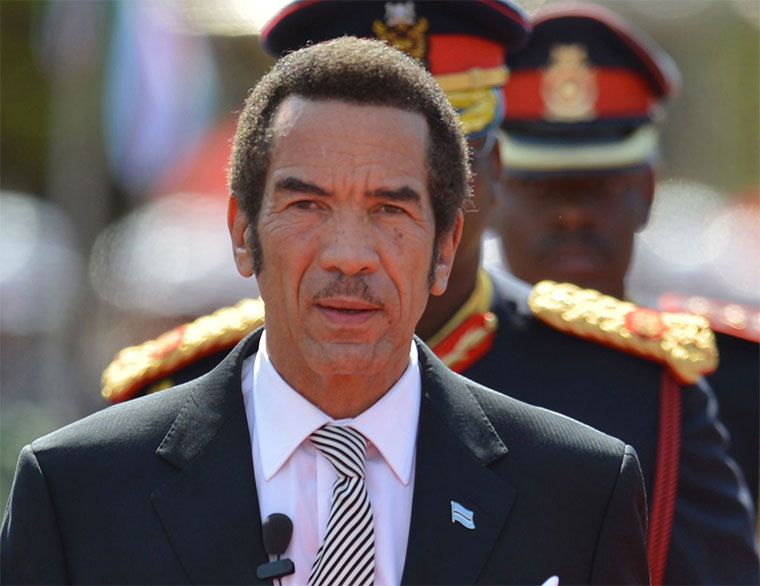 Botswana's former president has hit back against corruption allegations, vowing to sue a lead investigator for defamation after he accused the ex-leader of siphoning-off billions in state funds.

After a decade in power, Khama, 66, dramatically resigned from the Botswana Democratic Party (BDP) in May -- which has held power since 1966 -- and backed a small splinter party, shaking up the politics of one of Africa's most stable democracies.

He has renounced his hand-picked successor Mokgweetsi Masisi and accused his former deputy of autocracy in a deepening conflict between the two men.

Investigator Jako Hubona, with the Directorate on Corruption and Economic Crime -- an intelligence unit that probes state graft -- accused Khama, former intelligence chief Isaac Kgosi and another senior intelligence officer, Weleminah Maswabi, of transferring some of the funds to HSBC Bank in Hong Kong and leading South African banks.

The rest was pumped into offshore accounts as well as South African bank accounts, he claimed in an affidavit deposed in a recent high profile court case against Maswabi. So far, only Maswabi has been charged and is facing three counts of financing terrorism, possession of unexplained property and false declaration for passport.

She has since been granted bail and will make a court appearance in February next year. No charges against Khama have been filed in the court.

Addressing a media briefing on Monday, Khama said the allegations made were false and "deliberately and maliciously fabricated" to tarnish his name.

"There is no doubt that the serious allegations by Hubona and his co-conspirators amount to criminal conduct and are extremely defamatory," Khama said.

"I have no offshore accounts and have maintained none during my presidency," he said. "Neither have I ever received any money from any unlawfully created Bank of Botswana account, or offshore account or any other account."

The accusations are surfacing as Botswana's largest opposition has filed a legal challenge against the outcome of last month's parliamentary polls, which were overwhelmingly won by the ruling party. The Botswana Patriotic Front, endorsed by Khama, got three seats in the poll.

What if some information turns up to the contrary, shall we aim for the noose or harakiri? I am not suggesting you did it, but the opportunities was too much to miss if I were you; May God Bless You My Son!
Report to administrator