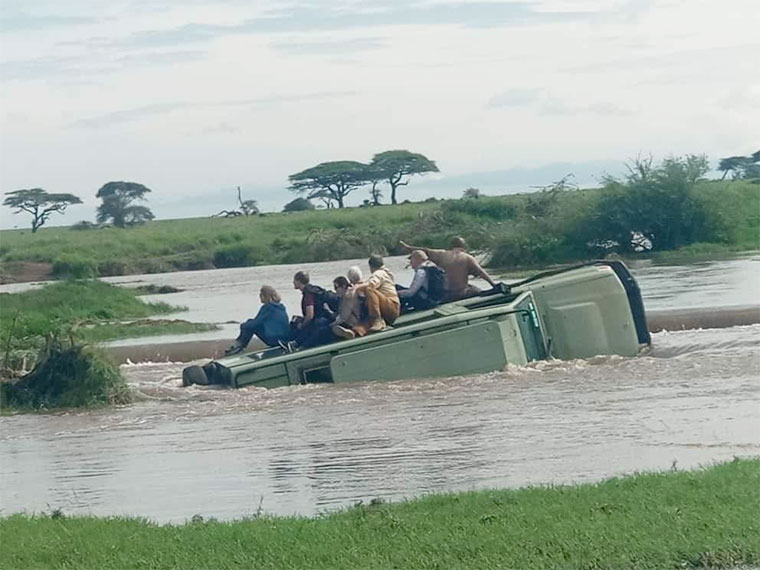 A tourist vehicle that was nearly submerged by the flash floods

The water levels substantially rose on Tuesday afternoon after R. Nile burst its banks - making it difficult for vehicles to enter the ferry. A safety alert statement issued by Uganda Wildlife Authority (UWA), indicates that Tangi River bridge built in 2013, has become impassable due to the floods. Tangi gate is about 110km from Karuma bridge along Pakwach road.

The devastating floods, the worst of their kind have also paralyzed traffic flow along Karuma and Pakwach highway after running water ferried fragments and blocked the highway. Last evening, Uganda National Roads Authority (UNRA) temporary closed the Packwach bridge along Karuma and Pakwach highway citing floods and to allow a team of engineers in Gulu and Arua to clear the road for immediate use. It advised travellers going to and from West Nile to use the Gulu-Adjumani-Leropi ferry, Gulu-Adjumani-Obongi ferry or the Masindi Wanseko ferry.

Extent of #PakwachFloods: A lorry truck was swept away by the waters following Tuesday's heavy downpour. Docking pier at Paraa in Murchison Falls National Park got submerged and vehicles can't use it to drive on to the ferry. Video @UgandaRedCross pic.twitter.com/0pOfPZbMmG

Jimmy Patrick Okema, the Aswa River region police spokesperson says at least 4,000 passengers were left stranded at the road intersection before and after Pakwach bridge after floodwaters cut them off.

Okema says that two vehicles including that of some tourists were submerged in the floodwaters after they attempted to manoeuvre their way out of the thick running water. Simon Peter Anyanzo, the operations manager of the Uganda Red Cross Society (URCS) in West Nile explained that the floods have been caused by high volumes of water levels from tributaries like River Kafu that feed into the River Nile following torrential rains in the country.

Martin Owor, the commissioner disaster management in the Office of the Prime Minister disclosed that OPM and police teams have been dispatched to join District Disaster Management Committees (DDMCs) of the affected districts to try to manage the crisis.

“Once again people are advised not to walk, ride or drive across any flooded road section or bridge and to keep away from Riverbanks and steep slopes,” Owor advised in a disaster report issued on Tuesday.

+1 #1 Kikomeko 2019-12-05 20:15
UNRA..means Uganda National Road Authority Once ran and Owned by One John Nasaasira..All Monies intended to Build and Maintain Roads was Stolen by Him and he went in Real Estate both in Uganda and South Africa..Today we see all this Happening and The Almighty tells the World that He is not a Thief..He Instructed his Cohorts in Runyakitara "Okwiiba Mwiibe kwonka muta taanisa Abantu" meaning Steal All you can but Do not Disorganise Wanainci..what a Joke..!

Today Uganda Looses 500 Billions Shs.every year Thru Corruption..Sam Kahamba Kuteesa Owns Entebbe Handling Services..meaning All Dollars Paid land in his Pocket..One Bagyenda Looted the Central Bank...The List is long...Uganda Belongs To them ..They Hunted their Animal and are Now nagging at Bones..
Report to administrator
0 #2 Akot 2019-12-07 21:33
Kikomeko, agreed, yet,

As things are the chief of corruption & owner of Uganda, Museveni, is there till he drops dead of old age at +90 years!

Then, what will Ugandans do when Museveni will be no more & will they go along with his family & the family businss will continue in peace?
Report to administrator