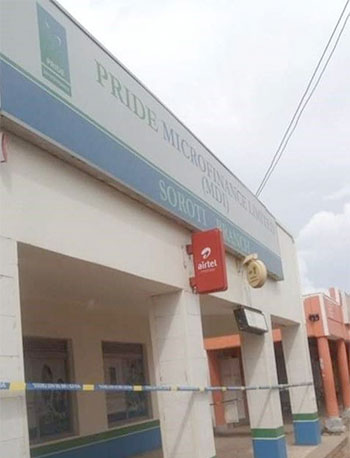 Over Shs 218 million was stolen when thugs robbed Pride Microfinance institute in Soroti.

The financial institute was broken into by unknown thugs on Saturday night. The thieves reportedly accessed the control room for cash after vandalizing the safe. They also removed CCTV cameras and left with money after chaining the Saracen security guards.

At the time, police arrested the guards and other two suspects, the bank manager, Benedict Nalumanyi failed to record a statement because he had no accurate figures of how much was stolen.

However, Michael Odongo, the regional police spokesman for East Kyoga says the bank manager finally recorded a statement indicating a loss of Shs 218 million. He notes that police are investigating the matter and will use the available CCTV footage nearby to net the criminals.

Four suspects comprising two security guards of Saracen Security Company; James Ojara, 20 and John Omusugu, 23; and the other two are still in police custody after their arrest on Sunday.

On Tuesday, few customers were seen going about with their inquiries and transactions. Namulanyi, the branch manager declined to speak with our reporter claiming that he is not authorized to talk to the media.