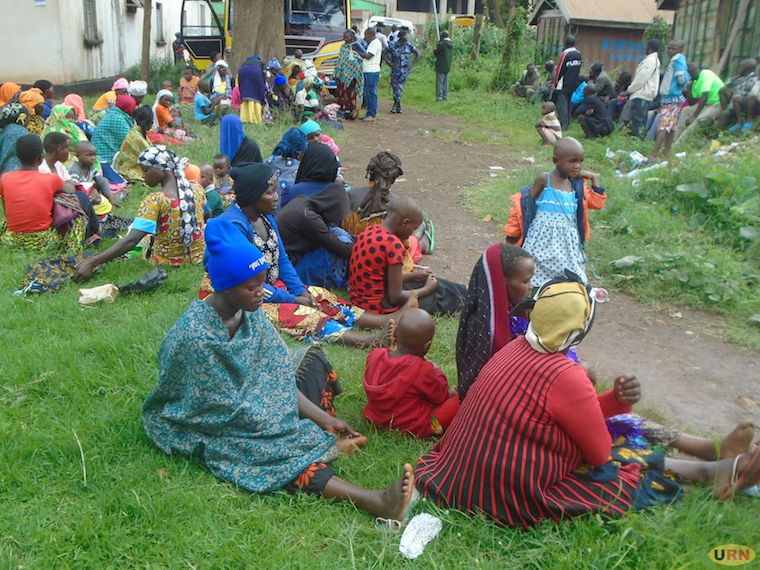 Some of the suspects at Kabale police station

83 Congolese and Rwandan nationals are in police custody in Kabale for illegal entry into Uganda. The suspects were intercepted around 10 am on Thursday morning aboard a bus registration number, UAV 118U belonging to Bismarkan Coaches on their way to Kampala city from Kisoro district.

The arrested include 48 women, 20 children and 15 men. Brian Ampeire, the Kabale district police commander, says they were forced to stage a roadblock in Kabale town to intercept the bus after a tip-off from an informer in Kisoro about the suspicious travelers.

Ampeire says the suspects were speaking only Kinyarwanda and French, adding that they didn’t have any travel documents and didn’t provide any clear reasons about their destination. He says the suspects are locked up at Kabale central police station for questioning.

One of the suspects, who declined to reveal his identities, told URN they cross to Uganda from the Democratic Republic of Congo to attend a Christian fellowship in Kampala. He said that many of their colleagues have already arrived in Kampala for the same fellowship.

He, however, declined to give details of where the fellowship is and the church behind it. Security was still questioning the suspects to establish the exact number that had crossed from Rwanda and DR Congo.

The arrest of suspects comes a day after 35 people, including 32 Rwandan and three Congolese nationals were deported for illegal entry into Uganda. The deportees were arrested in a joint security operation involving the army and police in the areas of Russia, MuLine and Karumena in Kisoro district in the wee hours of Monday morning.

More than 200 people were picked during the operation without identification documents. Most of the suspects were released after the screening leaving behind 39 illegal immigrants. They were arraigned before Kisoro Grade one magistrate, Raphael Vueni on Tuesday for illegal entry.

Three Rwandan suspects and a DRC national pleaded not guilty to the charges and were remanded to Kisoro government prison until December 18, 2019. The remaining 35 suspects pleaded guilty and asked for pardon. On Wednesday,  the magistrate ordered immigration to deport them to their respective countries, saying that they should have followed proper procedures to cross into Uganda.

However, Rwanda's New Times publication on Tuesday reported that the operation was targeting Rwandans. The paper claimed that the suspects were gathered in one place, screened and bundled onto garbage trucks, which drove them to Kisoro police station.

The New Times also claimed that some of those arrested were found to be Congolese or Tanzanian nationals and were subsequently set free.

However, Captain Peter Mugisha, the Kisoro resident district commissioner said that the operation was aimed at reducing criminality including rampant cases of murder, rape, robbery and theft among others in Kisoro district. According to Mugisha, residents had resorted to mob justice, accusing security of failing to identify suspected criminals.

Uganda has been at loggerheads with Rwanda since the beginning of this year when Kigali closed the one-stop border post at Gatuna.

Africa is now 100% independent, why haven't the independent Africans dismantle the colonial borders?

In other words, we are hopelessly hypocritical. This is because, after independence we have functionally made those "artificial borders' more real, divisive and nasty.
Report to administrator
0 #3 Lakwena 2019-12-01 10:49
Quoting Amooti Mugi:

The Uganda-S.Sudan boarder also needs to be cleaned similarly....!!!!

Amooti, since the border between Ugandan and all her neighbors is in Kampala, ideally the cleaning should start from Kampala and fan outward.

Otherwise what the police and/or immigration is doing is deporting the proverbial small fish (mukene) who are just scavenging (as above, most of them are desperate single mothers, women and children).
Report to administrator
0 #4 rubangakene 2019-12-02 21:02
This action "stinks to high hell": what is it with these people really? They seem to act with knee-jerk mentality, there is no sense, logic or perceived intelligence in their actions.

Simply, nobody in this government is intelligent: you see at one time they were ready to welcome "refugees and undesirable elements" from Israel, they also "advocate freedom of movement" within the East African states, but now they turn around and say 'deport the lot. WHERE DO WE STAND REALLY?
Report to administrator