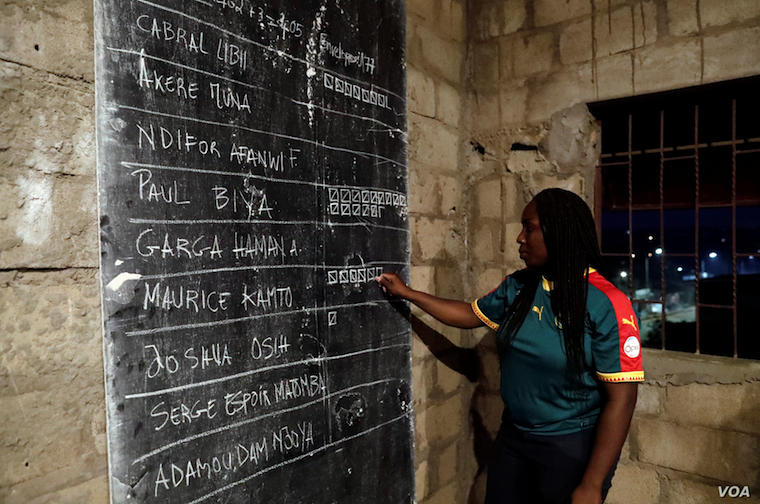 An election worker counts votes during the presidential election in Yaounde, Cameroon, Oct. 7, 2018

YAOUNDE - As Cameroon prepares for local and parliamentary elections, young people have organized protests across the central African state against the aging political leadership. Cameroonian youths have been disrupting meetings to demand more say in politics and for octogenarian leaders to step down.

Youth activists from the ruling Cameroon Peoples Democratic Movement (CPDM) sing and shout that they no longer want elderly politicians to represent them. The group of about 400 young people erected barricades and marched Sunday through the Mvogmbi neighborhood of Cameroon’s capital.

27-year-old Aristide Omgbwa, a member of CPDM’s youth wing, said it is unthinkable that people who are above 80 years of age and who have been in power since 1995, with nothing to show as achievements, still want to make decisions for the public.

The party should explain why they hate the youth, said Omgbwa, and why they want youth - who are the future of Cameroon - to continue to suffer.

Hundreds of Cameroon youth have been protesting in at least 23 towns across the country against elderly politicians seeking office during the upcoming February local and parliamentary elections.

In the town of Sangmelima, a group of angry youth crashed a swearing-in ceremony for the ruling party.  In the clashes that followed, at least seven people were wounded. While in the town of Tokombere, youths interrupted a meeting they said tried to impose 81-year-old lawmaker Cavaye Yeguie Djibril as candidate for their region.

Djibril has been a lawmaker for 47 years and speaker of Cameroon’s national assembly for 27 years. 33-year-old Ibrahima Bascuda said the octogenarian can no longer represent the views of youth.

He said most of the old politicians have abandoned the populations they are supposed to serve. They do not attend meetings and only show up with huge sums of money to corrupt the electorate, claimed Bascuda, who for the most part are naive.

He said the youth are saying no to old politicians who are frail and cannot even participate at debates in parliament, where laws that affect the future of the nation are voted on. The old(er generation) should allow the youth to build their own future in parliament and local councils, said Bascuda.

But it’s not just octogenarian politicians who are being targeted by Cameroon’s angry youths. In the town of Ebebda, Cameroonian youths gave chase to 62-year-old lawmaker Epondo Fouda Cecile after he announced plans to run again for re-election after fifteen years in office.

Bernard Fongang is a senior ruling party official and close aide of CPDM party chair and Cameroon President Paul Biya. He said after the weekend’s protests, Biya has given new guidelines for party candidates.

Fongang said Biya has given firm instructions that only youths who are of good character, have not been involved in acts of violence and corrupt practices, and who have been active in party and community activities should be given priority to compete in the elections.  Youth form a strong political force, says Fongang, and the CPDM wants to modernize.  He said four out of every ten candidates must be youths.

Fongang said Biya had given instructions that should a youth party member compete for a parliamentary seat with anyone in power for 25 years, the youth should be given priority. Biya himself is Africa’s oldest ruler at 87-years-old and has been in power in Cameroon for over four decades.

Critics have raised concerns about the aging president’s health.  If there were a vacancy, 84-year-old President of the Senate Marcel Niat Njifenjis would take over as head of state.

70 percent of Cameroon’s lawmakers and 80 per cent of its senators are over the age of 60. The protesting youths say it is time they hand power to a younger generation to prepare for the future of Cameroon.

At least the Cameroonian youths have the liberty to protest in at least 23 towns across the country.

But in a Gerontocracy (rule by octogenarians) Uganda, where the 80 years old conspire to retire the 60 years old; it is treason for our youths to protest and tell 75 years M7, 90-year old Kivejinja, Naduli and Gen Moses Ali of thois country to go home.

Although they can no longer recognize the difference between their left from the right legs, and often reminded that one of their shoes has dropped off on the stairs; but they will swear by their mothers that they are still young and the best to lead the country.
Report to administrator