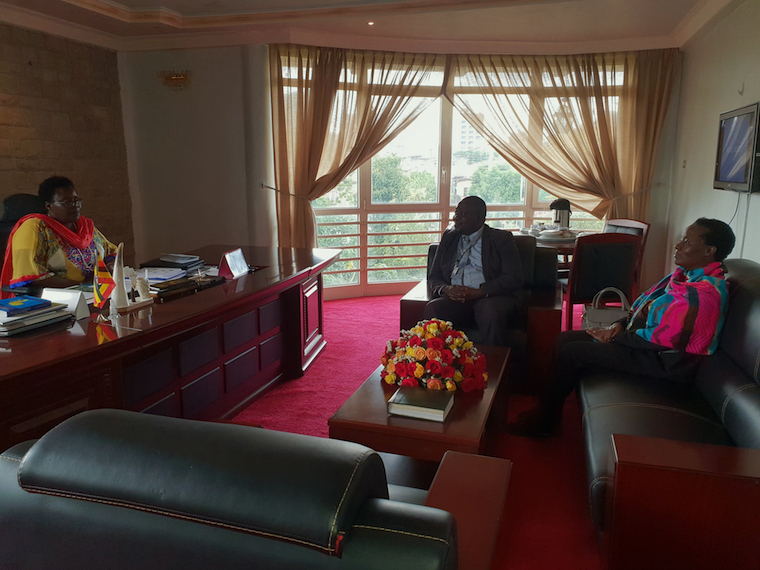 The Uganda Embassy land in Addis Ababa, Ethiopia has been encroached on, according to an internal audit by the ministry of Finance.

Uganda was supposed to build its Embassy house and a chancery on the land to reduce expenditure on the rent. Hussein Isingoma, the acting director forensic and risk advisory services at the ministry, said that they had found the land given to Uganda was not free anymore as parts of it had encroached.

The auditor general warned in the audit report for the year ended June 2018 that there was risk that government could lose the said land.

During the financial years 2014/15 and 2015/16, Uganda government allocated at least $266,073 (Shs 985m) to the embassy to pay the Ethiopia government to pave way for the development of either a chancery or residence or both.

In the June 2018 report, the auditor general says “I observed that GOU delayed fulfilling the conditions of the offer resulting in part of this land being re-allocated to a private developer thus affecting the embassy’s construction plan.”

He said interviews held with the Uganda Embassy staff revealed that the remaining land may not be enough for the intended development.

Meanwhile, the money that had been allocated for the land was spent on other things that had not been planned for. These included education allowance, climatic allowance, carriage of councillors goods/shipment of goods back to Kampala, posting allowance, cash withdrawal ($4,500), rent, furniture, renovation of official residence, and painting of chancery.

Meanwhile, in Juba, the Uganda Embassy collected $66,000 (Shs 244m) in non-tax revenue but did not remit the money to the treasury in Kampala.

I encourage all Ugandans regardless of what political inclinations to come out and walk along side the president to tell him that since he is demonstrating against himself and the government he heads on corruption he has failed miserably indeed.

Otherwise who is he telling that corruption is endemic in Uganda if he is not telling himself? What a shame!!! cun2a
Report to administrator
0 #2 rubangakene 2019-11-27 19:29
These people also; no money is safe with them, (hawa ni waizi tuu!, nyangauu).
Report to administrator
+1 #3 kabayekka 2019-11-28 05:25
Odongkara, NRM continues to blame all its major political failures to the Opposition fraternity in the country.

And one hopes that in order for this Opposition not to be seen as very weak and might be destroyed by 2021, they should join up with this walk against corruption on that day.

Because if the Opposition makes its own corruption walk any other day, the Uganda Police will tear gas them and beat them up badly.
Report to administrator
+1 #4 Lakwena 2019-11-28 13:23
In other words, while the Ambassador, and/or Foreign Affairs bureaucrats are sleeping on the job and dreaming about the Sugar Candy Mountain, and the president is going for a walk in the park and City Square, behind the scene; the pigs, vultures and hyenas (enemies within) are ravaging and savaging the budget allocation.

What a country
Report to administrator
+1 #5 Coolman 2019-11-28 13:56
The headline is very misleading. No one 'grabbed' land. It was simply reallocated because of failure of one party to fulfil it's part of the bargain.
Report to administrator
+1 #6 Kelly 2019-11-28 18:42
Has the Auditor General looked at the possibility that "we" (where "we" stands for those Vampires) actually sub-leased or parceled out the land for a few pieces of silver?

What haven't these NRM goons sold!!!!

How do you expect a mere 2 acre piece of land in a far off place away from the watchful eyes of the public be safe if they can sell with abandon the ones we are seeing?
Report to administrator
+1 #7 Kikomeko 2019-11-28 18:51
Come on ..Whom do you think you are Fooling here?? that Money Never reached Ethiopia..it was Chopped in Uganda like the Many Billions Stolen.

Recently it was 40 Billions on Isimba Dam..Please Observer save our Nerves and Stop Printing such a Crap...Every Able-Bodied Ugandan Today is aware that The Crumbling Siasa Junta of NRA is Stealing All it can Get..that is their Modus Operandi..
Report to administrator