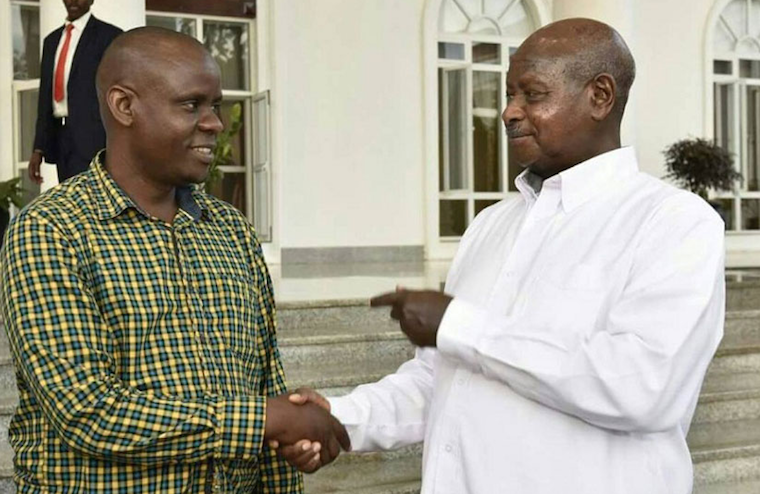 He said the appointments are not a simple ruse to win over hearts and minds in the slums, the ghetto, in the run-up to the 2021 general election. He also urged the ruling NRM supporters to work for their money instead of waiting for presidential cash handouts.

What do you make of the president reaching out to people in the music industry?

If he wants to reach out to the ghetto, it is his mandate and the right representatives of the ghetto are the very people living there. When he appoints Butchaman as his envoy in the ghetto we should respect that decision.

What does it say of the president that he thinks the people who can now deliver victory for him are the likes of Butchaman?

The president is a good man; he listens and forgives. Four months ago you saw Full Figure abusing him, left, right and centre. But the other day you saw the president with her standing side-by-side… Who can tolerate that in Uganda? It’s only him.

So, if he believes it’s people like Butchaman who can cause change, I don’t see any problem with that. I respect his decision and I pledge loyalty to those people he has appointed. I call Madam Full Figure my boss now, I report to her if I need anything from the president. I also advise the ghetto kids to contact their envoy, because he’s now a leader.

If someone accuses the president of being opportunistic in his overtures towards the ghetto, wouldn’t that be fair comment?

The president cannot be an opportunist. I have told you he has tried to reach out to everybody, farmers, and Karimojong warriors from whom he collected over 500,000 guns.

So, after pacifying Karamoja, the north and Teso, he now has to pacify areas around Kampala through his war on poverty. There is no way you can fight insecurity when you have not empowered the ghetto. Butchaman should not disappoint the ghetto people. He should tell the president the truth about the challenges of the ghetto; he will solve them.

He’s the president of Uganda and I know his focus will not change even after the 2021 general election, which I know he’s going to win. Let the leaders perform, they will be retained and actually promoted. I imagine Catherine Kusasira becoming the minister for Kampala if she has the qualification.

That’s what I’ve been telling you that people should work for the country; they should be patriotic. The other day a man was crying because KCCA was closing his boutique over a tax liability of Shs 300,000.

But how much is your capital for you to pay a tax of Sh 300,000? Who should help such a person; it should be the councilors to help their people. So, I want to call upon Kusasira, to stand for the people of Kampala, not for personal interest.

But many, if not all those, presidential appointees don’t have the Public Service requirements like education to hold such jobs… Doesn’t this render credence to the narrative that the president is just using them for political ends?

I don’t know about their qualifications and I don’t want to talk about that. All I know is that even those who have not gone to school can perform. Many of those who fought and propped up this government were illiterate. But they have performed exceptionally well.

So, I don’t believe education is key to performance. But it’s up to the president. I respect his decision and I will work with the appointees as long as they can listen to my voice. If they can’t, then I will find other means to get my message heard.

NRM leaders in Kampala have been incensed by the president’s decision to ditch them in favor of musicians. Do you share their sentiments?

I’m not a leader in NRM. I’m simply a supporter of the party and the president. And I love Uganda. I want to advise my leaders that whoever is not happy with the decision of the president, he or she should use proper channels to air their discomforts. I’m loyal to the chairman, and whatever he decides, I’m behind it.

But the president can be wrong…

I don’t know; they say, a boss never makes mistakes… A boss doesn’t forget, he just skips. I’m sure he will sort things out. You see NRM is a democratic party with organs, which make decisions. If those leaders take their grievances to these party organs, they will be listened to.

My call to those people is that if the president can’t give you attention, reach out to the other party organs. Look for the vice president Edward Ssekandi, look out for Hajj Moses Kigongo who’s the vice chairman of the NRM, he’s always at Mosa Courts, and he will listen to you.

I will advise you to talk to the presidential spokesperson Don Wanyama about that. I’m just a peasant; I don’t know how government works.

Recently you said you are tired of beggars; what prompted your outburst?

People should learn to work. Let them seek guidance on how to run businesses instead of thinking about handouts. You can’t live on handouts forever. I want to repeat it that I have never received any shilling from the president to boost my businesses.

Actually many times I work and it takes three to four years for them to pay me. But I’m better off than a person who has not worked. Let NRM people know that I don’t get money from the president and they should not come to me for money. Let them learn to work, the president will not give everyone money. We are 40 million Ugandans; he can’t give out handouts. [to all of us].

What do you think of the notion that the president has become a cash machine and the motivation of those meeting him is mainly to get money?

I don’t know whether he gives them, but if he does, that’s his mandate as head of state. I don’t work for him and he doesn’t give me money. I currently have a problem in Juba where thieves want to steal my property, but he doesn’t know about it.

I’m just going to write a letter to him. That’s when he will know. If he’s giving others money, probably it’s from his budget but as for me, I don’t want free money. By the way, sometimes I use money I get from personal businesses to help my party. I have printed T-shirts for the president free of charge; I give them sound equipment sometimes free of charge.

But somebody will challenge you that you get the business from government, thanks to your relationship with the president…

I want to tell you something, that all government businesses are tendered through adverts in the newspapers. I submit [tender bids] with companies owned by ministers and I defeat them.

But I’m not closer to the president than the people he sits with in cabinet every week. It’s about professionalism and how I deliver. When I’m given a task, I deliver.

That’s why I am now among the 500 leading taxpayers for the fourth year running. I don’t have a relative working for State House, or the government of Uganda. I’m a son of an unknown peasant; that’s why I live a humble lifestyle. That’s why I continue supporting young people because I can’t forget my background.

May be you want a few of your former course mates who did course works, continuous assessment tests and even the final exam (2 papers) to come out and testify.

Anyway, just in case your raw ambition makes you start dreaming of an elected political office, kindly note that there are some not so friendly questions waiting for you to answer. Don't say I didn't warn you!!!
Report to administrator