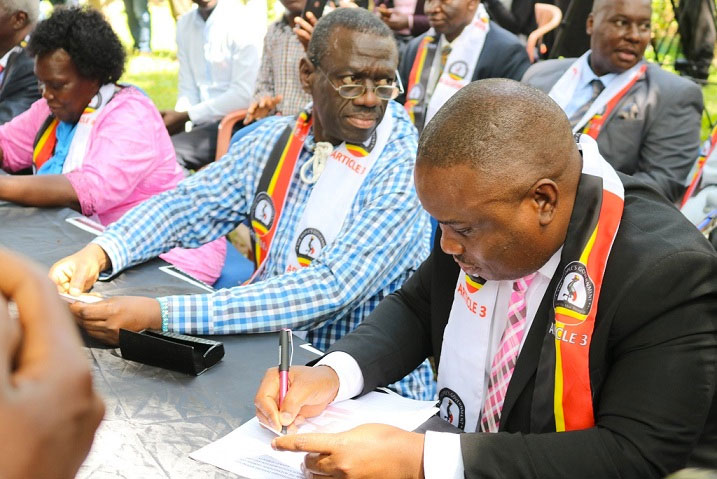 The ICC petition campaign was launched by People's Government

Police in Ntungamo has confiscated over 40 petition forms drafted by the Forum for Democratic Party (FDC) to drag President Museveni to the International Criminal Court (ICC).

Police yesterday Thursday grabbed the forms from a shop owned by the Ntungamo municipality FDC chairperson, Denis Mugizi. The police action comes barely days after news started circulating in the area that the chairperson was mobilizing residents to sign the petition. The raid was led by Vian Habineza a crime intelligence officer at Ntungamo police station.

Mugizi says that he first received calls from Habineza asking him to record a statement but had asked to be given time so that he first consults his lawyers. Ntungamo district FDC chairperson Benon Ntendere says that they are in contact with party lawyers to see that documents confiscated from Mugizi are not used against him.

Ntendere further reveals that they are disappointed by the actions of the police, saying that the party has the freedom to perform its duties and the police should respect rights instead of resort to raids and intimidating the party members.

Ntungamo district police commander Damiano Katwesimwe confirmed that the forms were confiscated by did not divulge further details. Last week, the security operatives raided the officials of the home of Kalyatha Bwambale, a renowned FDC supporter in Kisolholho village of Kitholhu sub-county in Kasese.

Two weeks ago, the 'People’s Government' led Rtd Col Kizza Besigye launched a campaign to collect two million signatures aimed at asking the prosecutor at the ICC, Justice Fatou Bensouda to prosecute Museveni and his implicated officials on alleged crimes against humanity.

According to Ingrid Turinawe, the FDC secretary for mobilisation, more than 60,000 people have so far appended their signatures on the hard copies of the forms and that more forms were being dispatched to the districts.

Early this week, unknown thugs broke into FDC party headquarters in Najjanankumbi and stole computers and documents believed to contain the petition forms. Two days ago, about 30 police personnel raided the FDC offices in Kasese and confiscated several documents including ICC petition forms.

It's Ugandans going along with the tribalistic system, ensuring immunity of Museveni/nrm from ICC!

How would ICC bring Museveni to justice & leave tribal leaders, elites OUT & who will ICC impose on Ugandans as replacement to Museveni?

True, Ugandans believe they are doing the right thing by holding on to the tribalistic system, as under migrant Museveni, it's a peaceful country, but just poor & this is accepted by our people!

Will the peace under the tribalistic system hold when migrant Museveni will be no more?

Yet, even whenq Museveni will be no more, ICC, developed world will remain SILENT, waiting for Ugandans to put in palce a government that will be internationally acceptable!

Ugandans MUST understand that the tribalistic system MUST BE BROUGHT DOWN first & above all, or not even ICC can bring Musveni to justice!
Report to administrator
-1 #12 Akot 2019-11-24 18:24
Quoting Lysol:

FDC looks unprofessionals with their struggle to depst the dictatorship.

Internationalized the struggle and also petition the US Congress and other Human RIght groups around the world. Make the struggle globale. We did that with Amin.

All FDC needs is call on tribal leaders to stand down & UNITY of Ugandans. Then USA/EU will be with 'the UNITED people of Uganda" making their stand!

Do Ugandans really want Museveni/nrm OUT?

How on earth do Ugandans expect help from USA, Europe when they are alright with the tribalistic system that goes against American/European politics & values?

No American/European politicians would risk getting at Museveni as long as Ugandans maintain the tribalistic system!

Once racist political parties in developed world had to reform/change or they would be before justice!
Report to administrator
0 #13 Akot 2019-11-24 18:31
Quoting karemire:

Who is talking here now? For years deaths in Luweero Triangle were SQUARELY blamed on Obote and northerners in general.

It took time, explanations for Ugandans to understand how Museveni manipulated them, used their confusion...to make them believe he was a saint!

There was no way Dr Obote could lose that election as it was only Buganda/Acholi that composed UPC/DP, while the Dr sang all the other tribes to UNITY around him!

Yet, today, every tribe MUST join hands, if Museveni is to be thrown out & our children get chance to be FREE & build the Uganda they want!

This will beging the moment tribal leaders stand down/forced to & UNITY of our people against Museveni!
Report to administrator
0 #14 Akot 2019-11-24 18:38
Quoting Kelly:

FDC, for once this time show Ugandans that you are ready to steer this country when the M7 regime tumbles by being ahead of the banditry regime's game or else a section of the populace might think you are there just as a mere form and not substance.

This begines with FDC calling tribal leaders to stand down, then UNITY of Ugandans for common purpose against their common enemy, Museveni!

In covering up all their wrong doing and perverting the Constitution of the Republic of Uganda, it has become the police/military and Mr. M7's birthrights to abuse the rights of Ugandans with impunity.

Ugandans can, just by bringing down the tribalistic system & their UNITY, end Museveni's rulde, then police/military will have to take sides too; go with the demon or become Ugandans' security bodies, like in Egypt, Zimbabwe...!

As long as the tribalistic system stands, Museveni is safe even from ICC!

Do FDC & Ugandans want Museveni out or not?

As it is, Ugandans will be more destructive to themselves if they go for yet another fake election that will only legalise, officialise, constitutionalise the tribalistic system & Museveni's continuity!
Report to administrator
12