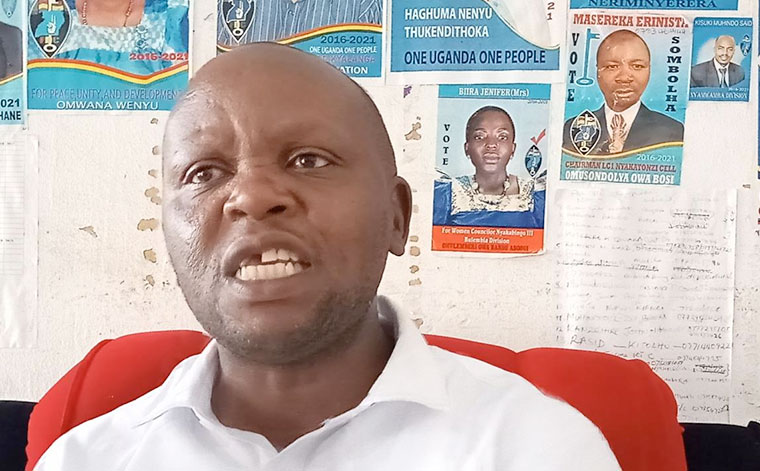 Plain-clothed security operatives have raided the offices of the opposition Forum for Democratic Change (FDC) party in Kasese town.

According to Kasese FDC district chairperson Saulo Maathe, security officers, about 30 of them, raided the party offices along Alexander Street and started ransacking the premises. Maathe says the security personnel without identifying themselves, started searching the offices and scattered the items therein. He said it was after they saw them in possession of firearms especially pistols that they realised they were security operatives.

He says the security officials confiscated and took with them a series of documents from the office including petition forms to the ICC, party’s minutes for the different meetings, his National ID and his phone. Maathe says they are yet to get information from the office the regional police commander to explain why the party’s offices were raided. He says the raid is an indicator of a continued shrinking space for political parties to execute their duties.

Kasese district chairperson Geoffrey Sibendire Bigogo condemned the raid and said it is suffocation of the development of multi-party democracy in the country. Bigogo argued that the best thing the security would have done if they needed any documents from the FDC would have been to secure a search warrant from court so that they get legal access to the party premises and subsequently all party documents in the office.

"It is really very unfortunate, bad for the democracy of this country that a registered political party can have its offices ransacked and have its documents thrown here and there. If they were any documents that police required, it would have been proper for them to write or at least have a warrant of search. The law is known, if you want a document that is in the premises or anything that is in the premises of somebody, you process a search warrant. But for now they have taken valuable documents, they have taken minutes of the party." said Bigogo.

The district boss said the raid implies that the security agencies want to intimidate FDC supporters ahead of the 2021 general election. He, however, said the party will remain strong and committed to the cause for better governance within the country.

"As Forum for Democratic Change especially Kasese district we have never, and shall never be intimidated. We have seen signs, these are signs that there is a lot of intimidation by the NRM party to have a walkover in the upcoming elections. But I can assure them that we’re ready and we’re going to counter-attack." added Bigogo.

He also added that the ruling government could be scared of the petition recently launched by the former FDC president Dr Kizza Besigye’s Peoples Government. The Peoples Government is in a campaign to solicit for two million signatures from citizens so as to back their petition to the International Criminal Court (ICC) to have President Yoweri Museveni prosecuted for what they call crimes against humanity.

The raid on the office of the FDC in Kasese comes barely two days after the FDC party headquarters at Najjanankumbi were broken into and a number of items including computers and printers were stolen. Last week, the security operatives also raided the officials of the home of Kalyatha Bwambale, a renowned FDC supporter in Kisolholho village of Kitholhu sub county in Kasese.

Even Jesus advised wisely that if you cannot agree with someone, try to sit down with them and come to some sort of an agreement.

Because if you do not do that, they are going to take you to the Courts of Law and they will win.

You will be fined heavily and taken to prison to be locked up for a very long time. If you are not guilty, why do you fear the courts of law that seek justice
Report to administrator
+1 #2 Richard 2019-11-20 23:45
Enanga soon will appear on National TVs claiming the Police had to act because they anticipated signing of the petition papers would cause violence in Kasese
Report to administrator
0 #3 Lakwena 2019-11-21 10:17
The illegal raid into FDC Offices (without a search warrant) confirms Mr. M7 & Co. desperate and have a case to answer in the ICC. Otherwise, why the panic and raid?

Simple, to terrorize, intimidate and destroy any potential evidence.

But even if the petition does not materialize, it is in itself bad enough for Mr. M7: he is now internationally labeled an ICC monstrous suspect; just like Al Bashir, Joseph Kony and Dominic Kyeswa (Ongwen) whom he petitioned the ICC.

He will further be isolated and demonized by the international community.

In other words, who wants to embrace and shake the Devil's bloody hands?
Report to administrator
0 #4 A k mukasa 2019-11-21 13:32
Interesting. NRM and its sycophants said the exercise was pointless.

They pooh-poohed it and claimed that that the petition had no chance of success. Now they are panicking. What a bunch of stiffs.
Report to administrator
0 #5 Zaitun 2019-11-21 15:22
From Makerere University to the offices of the opposition Forum for Democratic Change (FDC) party (in Kasese town).

We Ugandans should shed off fear but go ahead with the petition to drag these mad men and women to ICC. They have shown their arrogance enough for the world to know. It is high time we started composing lists of evil doers from every District.

All these are signs of dying horses that have, after all these debackle, started fearing for themselves and the future of their dear offsprings, but would wish to silence people.
No way! They have to pay the price of all the suffering they have caused to innocent Ugandans.
Report to administrator
0 #6 Lakwena 2019-11-22 12:42
Zaitun, we have one, Maj Gen Otema Awany; who forcefully went into the Gulu Central Prison and murdered a specific LRA suspect who was on remand, took away his body and buried it in unknown place/grave: probably inside the Gulu Military Barracks.

To date the relatives of that victim do not know where Gen Otema buried ones of Remember after the Kasese massacre in November 2016, some of the victims bodies were spirited off into the barracks, were they were hurriedly buried in unmarked graves.

If that is not crime against humanity then what is it?
Report to administrator