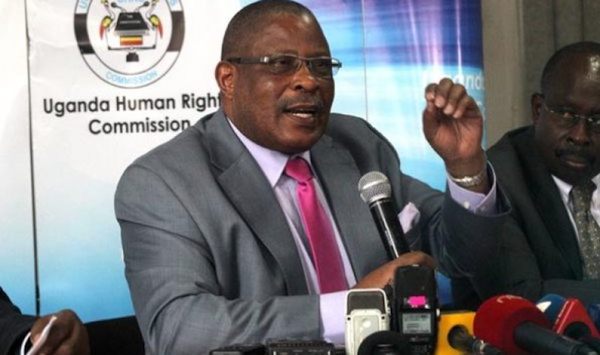 Uganda Human Rights Commission chairman Med Kaggwa has passed on. Kaggwa, 64, collapsed in his car, moments after leaving his home in Mulago, on the outskirts of Kampala today morning.

He was moments later rushed to a private hospital, Case Clinic by a medical doctor from Mulago national referral hospital, where he was pronounced dead on arrival. His brother Nasser Kigozi confirmed the news of his death in an interview at the deceased's home at Butakabukirwa close off Mawanda road in Kamwokya.

Kigozi told our reporter that Kaggwa’s body was still at Case Clinic and that the family was yet to come up with a burial program. He, however, noted that the family was heading straight to Mpigi, their ancestral home where all funeral activities will be held. Prof Twaha Kigongo Kaawaase, the first deputy Katikkiro of Buganda kingdom who was found at the home told URN that the burial program was to be released shortly.

The former member of both the Ugandan parliament and the East African Legislative Assembly (EALA) was scheduled to take part in a media round table discussion organised by the UN children's agency (Unicef) to commemorate World Children’s Day, today.

He studied from the National University of Ireland, where he obtained a Master of Laws degree, Makerere University and the Law Development Centre. He was a member of the Constituent Assembly that drafted the 1995 Constitution of Uganda and a commissioner of the Uganda Constitutional Commission. Additionally, he has been head of department of Law at the Law Development Centre and held a Political Office as Minister in Charge of Political Affairs in the Office of the President.

He is survived by a widow and five children. According to a statement from Case Clinic, Kaggwa was rushed to the hospital at about 7.55 am after he collapsed from inside his car near Mulago roundabout. His car reportedly stopped suddenly and knocked the car in front of it and bystanders had to break the windows to open the doors.

He was found to convulsing and non-responsive. The statement further says, Kaggwa was non-responsive to the advanced life support (CPR, intubation or defibrillation) after an hour and was declared dead at around 9.00 am.

God is the Give and also takes away. Though his death was abrupt his time WS that.
Report to administrator
+1 #2 Dadimos 2019-11-21 15:16
I am so shocked to hear about Med's sudden and untimely passing.

I have had the honour of knowing and working with him a few times since 2011.

He was such a friendly person and a strong human rights advocate. My condolences to his family, colleagues and friends. May his soul rest in peace!