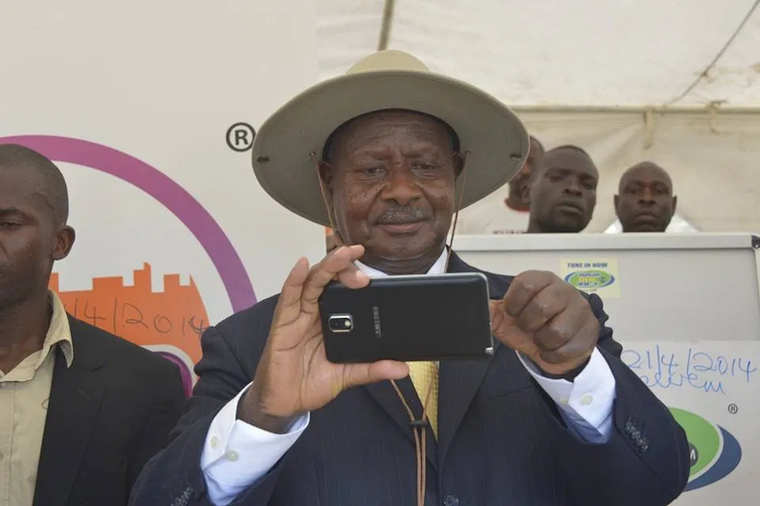 The assistant inspector general of police, Asan Kasingye has defended President Yoweri Museveni’s decision to block one of his followers on Twitter. It follows a suit filed by Hillary Innocent Taylor Seguya, a Harvard University student in August 2019 challenging Museveni for blocking him on his Twitter handle; @KagutaMuseveni.

In the same suit, Seguya the owner of the Twitter handle; @HillaryTaylorVI, also challenges  Kasingye, the political commissar in Uganda police force and government spokesperson, Ofwono Opondo for blocking him from accessing their respective Twitter handles @Akasingye and @OfwonoOpondo respectively.

The student of International Relations was blocked four months after openly telling Ghanaian President Nana Addo Akufo-Addo that he had wanted to exchange him for Uganda’s President Yoweri Museveni. The Ghanaian leader had just made a presentation on Pan-Africanism to a group of students at Harvard University in the United States.

Seguya said he admires Nana so much to the extent that he wished he could replace the Ugandan president due to his performance.

“I wish we could exchange you for our Ugandan president. He’s a dictator – Yoweri Museveni – he has been in power for 33 years and we are telling him enough is enough,” Seguya said.

It is not clear why the three leaders blocked him, months after the statements. However, Seguya contends blocking him infringes on his right against discrimination as enshrined in the Constitution as well as his constitutional freedom of speech, expression, freedom of thought, conscience and belief.

Through his lawyer Male Mabirizi, Seguya argued that the three Twitter handles were helping Ugandans in the diaspora to get information and feedback from the state actors. The student alleges that he has been denied a right to participate in the affairs of the government and to participate in peaceful activities to influence the policies of the government which are guaranteed in the Ugandan Constitution.

He adds that blocking him is tantamount to political persecution beyond what is acceptable and demonstrably justifiable in a free and democratic society and asked the court to declare the decision illegal. In his response to the suit, Kasingye says Seguya’s application is misconceived, lacks merit and amounts to abuse of court process. He states that he opened his Twitter handle in April 2015 as a personal account for his private use.

“My account is for private/personal interest such as family, football, religion sharing jokes and at times, police-related matters but at a personal level like any other Ugandan citizen” reads the affidavit in part.

Kasingye says his Twitter profile shows clearly that his views are not necessarily those of the Uganda police force and neither do they represent his official position in the force.

He also says that he has been advised by his lawyers in the Attorney General’s chambers that Seguya can get information about Uganda or President Museveni via State House on their Twitter handle @StateHouseUg and different newspaper handles on Twitter and television live streaming among other options.

He also said that the same information can be obtained from the Uganda Media Centre via its official Twitter handle @ugandamediacent as well as its website.

“I have been advised by the attorneys from the Attorney General’s Chambers whose advice I verily believe to be true that the twitter handles @KagutaMuseveni and @OfwonoOpondo are private twitter handles and not for the offices they hold”, the affidavit adds.

He asked the court to dismiss Seguya’s application arguing that he (Kasingye) enjoys the constitutional right to decide who to associate with on his private or personal account.  The court is yet to start hearing the matter.

-2 #1 Decimon Wandera 2019-11-18 21:52
Seguya could be right to claim for his rights and freedoms. I don't want to talk about that. I am right to think that some youth want to lose the point of holding leaders accountable deliberately conscious, ignorantly conscious or both.

The president is the fountain of honor. Whether you approve of him or not. He deserves respect. Arrogance is not going to lead us far neither will denial of president Museveni's contribution to this country and Africa lead us any further.
Report to administrator
-1 #2 Decimon Wandera 2019-11-18 21:53
Perhaps my brother meant the exchange of ideas between the two presidents...I cant tell, but if its for the exchange of presidents I think he was wrong.

This behaviour clearly shows that my brother doesn't have any leadership skills and its a vivid portrayal of his management skills. it simply implies that he is a type of a leader who will run away from the challenge in his home or house to enjoy a temporary comfort at a next of kin's house instead of addressing it from within...come back and repent,# respect elders.
Report to administrator
+1 #3 Lakwena 2019-11-19 13:41
Quoting Decimon Wandera:

This behaviour clearly shows that my brother doesn't have any leadership skills and its a vivid portrayal of his management skills. it simply implies that he is a type of a leader who will run away from the challenge in his home or house to enjoy a temporary comfort at a next of kin's house instead of addressing it from within...come back and repent,# respect elders.

But Decimon Wandera, since when are self-confessed criminals respected? What is fountain and honorable about Mr. M7 who told the whole world that he is nobody's servant, nor employee, a Master of violence and in our State House fighting only for himself?

In other words, Mr. M7's characterization of himself is typical of a parasite (Kawukumi) than a fountain of honor. So please, except for birds of the same feathers; to give respect and honor to such a person, is in itself disgraceful and dehumanizing to any decent person.
Report to administrator
0 #4 David 2019-11-19 23:04
What in the world is happening: such arrogance in the name of "rights" ?
Report to administrator