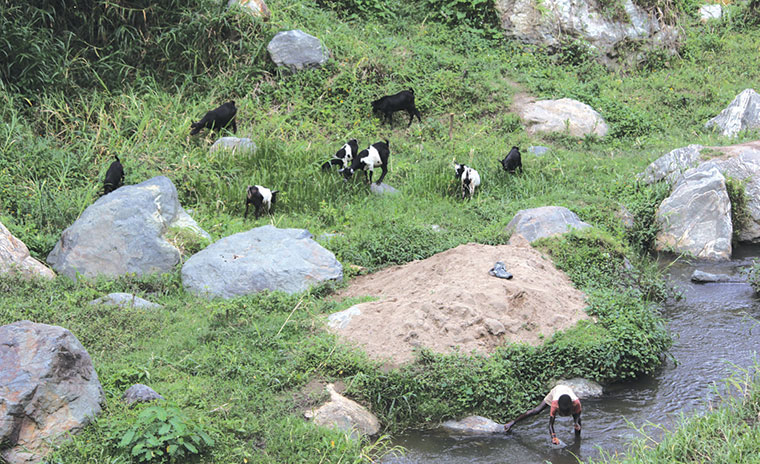 Six years ago, bustling economic activity all over its banks threatened to handicap the future of River Mpanga due to contamination but there is a refreshing rare spectacle after a concerted conservation campaign, writes MOSES MUGALU.

Though these economic activities put money in the pockets of the locals, they were dangerous to River Mpanga’s ecosystem. They caused massive contamination of the river and threatened to dry it up.

This kind of destruction was replicated along the river’s estimated 5,000-square-kilometre catchment stretch in the western districts of Kabarole, Kyenjojo, Ibanda, Kamwenge, Kiruhura and Kitagendwa.

It is against that backdrop that local government authorities, civil society, cultural leaders and the ministry of water and environment intervened. Apart from hydo-power generation (18 megawatts station), River Mpanga is the main source of water for domestic use (National Water and Sewerage Corporation plant) and for many small-scale industries in the six aforementioned districts.

In 2013, working through the River Mpanga Catchment Committee, the districts launched a campaign to protect the river’s catchment areas, which include wetlands and its banks. The committee is charged with supervising the collaborated efforts of civil society and local governments in conserving the protected areas.

In recent years, locals have planted more trees along the river banks –at its source at Rwenzori ranges overlooking Fort Portal town. Non-governmental organizations including Protos and HAWASA provided free seedlings and supported residents to run their own nursery tree-beds for economic benefits. The nursery beds produce the local Musizi and Misambya tree-seedlings, which NGOs buy and distribute free to locals for planting.

The NGOs have also encouraged farmers, who used to grow crops in the protected river bank areas, to switch to beekeeping.

Mbusa Mugabe, one of the former crop growers in Kibagha A village, said beekeeping is a better alternative source of income for him. Last week, MPs on the Natural Resources and Environment Committee toured his apiary project as part of a field visit to assess ongoing efforts to save River Mpanga.

“Bees like water and flowers; so, there’s a lot of honey here because of the flowers and flowing water,” the 25-year-old told legislators.

He received financial and technical support from the NGOs to start the project. He has 13 beehives and will make the first honey extraction next month. He expects to earn more than Shs 300,000.

There are many youth groups and individuals involved in such projects in Karangura sub-county. Majority of whom used to sand mine and cut trees for charcoal burning before.

In the wider Kamwenge district, another NGO, Water for People, and the local government in Biguli sub-county have successfully restored Gwakasirabo wetland. The extensive swampy area is one of the major filters with many small rivers that feed into River Mpanga.

According to local council officials, in 2012, this vital wetland was completely wiped out by farmers. Aloysius Mukasa, the parish chief, said Biguli was a water-stressed area.

“This place was gardens! We did not have water for ourselves and our animals; it was a crisis in the whole sub-county,” Mukasa recalled on November 7.

A visiting delegation of MPs, the media and civil society officials was visibly impressed by the regenerated lush green grasses and trees now in Gwakasirabo swamps.

The restoration of the wetland has enabled Biguli’s four parishes (Kampala B, Kabuye, Malere and Biguli) to have access to clean piped water. There are six piped water systems, installed by Water For People, which serve 38,511 residents.

Former wetland encroachers have been trained in fish farming and handicraft making (using raw materials from the regenerated swamps) to earn a living. A similar approach on managing wetlands and swamps is being implemented in other districts.

The committee gets a paltry Shs 960,000 per quarter as conditional grant from government. Accordingly, they rely heavily on donors and civil society.

The national budget allocation to conserving natural resources is only two percent. Yunia Musaazi, the executive director, Uganda Water and Sanitation NGO Network (UWASNET), called on MPs to lobby for increased funding from government. For instance, Musaazi is worried by the slow regeneration of the country’s forest cover, which decreased from 24 to nine percent between 1990 and 2018.

From this discussion, MPs Silas Aogon (Kumi), John Bosco Ikojo (Bukedea), Speranza Baguma (Kyenjojo Woman) and Fort Portal Municipality’s Alex Ruhunda, agreed to support a petition to save the Muzizi forest and wetland catchment, which stretches from Mubende to Kyegegwa and Kyenjojo districts.

The petition, by local NGO Society for Ecological Restoration, will be presented to the Speaker of Parliament soon.