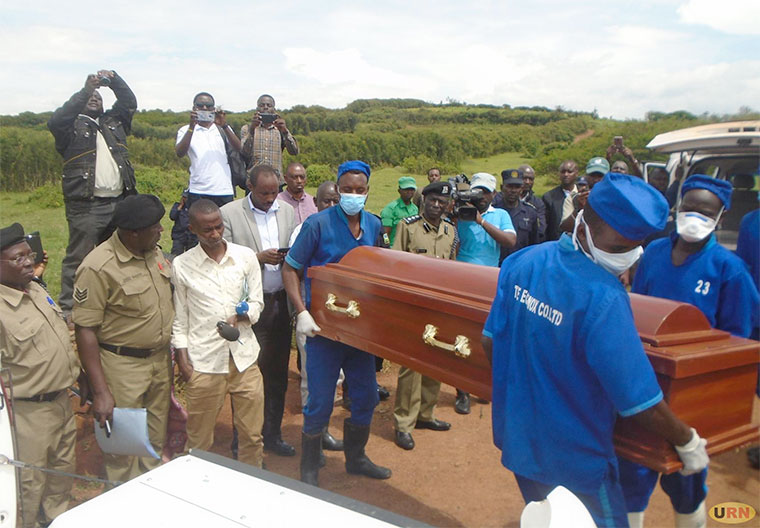 Rwanda hands over the bodies of the killed Ugandans

Drama ensued at the Uganda-Rwanda border of Buziba in Kamwezi, Rukiga district this morning as Rwanda handed over the bodies of two Ugandans shot dead by Rwandan security last weekend.

John Bosco Tuhirirwe and Job Ebyarishaga, both residents of Kamwezi, were shot dead by Rwandan security at Tabarwe sector in Nyagatare district in the wee hours of Sunday morning, about 200 meters from Ugandan border on allegations of smuggling tobacco.

Three other Ugandans who were with the deceased; Aron Ainebyoona, Christopher Byamukama and Emmanuel Niwamanya managed to flee back to Uganda unharmed. Local leaders from Rukiga district and members of the deceased’s families gathered at Uganda-Rwanda border in Buziba around 11 am this morning to receive the bodies from Rwandan authorities.

It took about an hour for Rwandan security officials led by Emmanuel Hatari, the Eastern Province region police commander and David Claudian Mushabe, the Nyagatare district mayor to arrive with the bodies amidst tight security. They tried to hand over the bodies with just their death certificates.

However, Ugandan security authorities demanded that their counterparts present a postmortem and handover report before they receive the bodies. The Rwandan authorities instead handed over the deceased’s death certificates, which didn’t go down well with the Ugandan authorities.

The Ugandan delegation was angered further when they realized that the death certificates were written in French and Kinyarwanda languages instead of English, which they could easily understand. Sserunjoji, Maate and Muhindo declined to receive the bodies and demanded that the Rwandan officials first write a handover report.

This forced some Rwandan officials to drive back to Nyagatare to pick a police stamp and headed papers to write the handover report after the Ugandan team rejected a draft on a plain piece of paper. It took about one and a half hours for the handover report to be drafted. The Rwandan team promised to hand over the postmortem reports through their embassy. The Ugandan officials condemned the shooting of the Ugandans, saying killing doesn’t solve problems.

Prikeria Muhindo Mwiine, the Rukiga resident district commissioner, said the two should have been arrested and charged with smuggling.

"We’re really sorry as people of Uganda, people of Kamwezi to have lost these two sons of ours. It is really very unfortunate that they met their death and I want to condemn the killing. People should be arrested and put to prison. Killing will not solve problems. It is unfortunate that we lost our people." she said.

Rwanda has since justified the killings claiming their police officers acted in self-defence. David Claudian Mushabe, the mayor of Nyagatare district maintained that the two were killed when they assaulted police officers. Mushabe said the shooting dead of the two Ugandans should be a lesson to Uganda that the two countries operate and deal in crime in different ways.

"When police officers tried to stop the smugglers, they refused and eventually violently wanted even to kill the police officers. What happened, in self-defence, the police shot dead two of them. Besides that, to me, I can say it is very unfortunate though there is a lesson to learn. Those who smuggle should not be violent, also they should know that there are some gazetted areas they should be using if they are going for commercial businesses and this should be known. It is a pity to have these people killed but again every country has its own rules, what it likes to do, its own mandate and its own security." said Mushabe.

Johnson Mushure, the father of Job Ebyarishaga said the death of his son is a big loss to the family since he was the sole breadwinner. He wants the Ugandan government to compensate his family and take care of the funeral arrangements.

Tensions between Uganda and Rwanda were heightened even further when in February this year when Rwanda closed its borders with Uganda - blocking any movement of goods or people across the borders. Rwanda accused Uganda of abducting its citizens and locking them up in ungazetted areas as well as hosting and facilitating dissidents plotting against its government.

Uganda denied the accusations but also accused Rwanda of destabilising peace and security within Uganda through infiltrating the security agencies including police, army, Internal Security Organisations among others.

In May this year, Alex Nyesiga Atuheire was shot dead by Rwandan soldiers who crossed into Uganda to arrest an unidentified smuggler accused of illegally taking second-hand clothes to Rwanda. Atuheire was killed following a scuffle between the soldiers and the locals who were protesting the illegal and provocative entry of Rwandan security into Ugandan territory. There have also been reports of several Rwandans arrested by Rwandan security as they attempted to cross over to Uganda to access healthcare and education services.

The diplomatic relations between the two countries seemed to have been taking a friendlier approach lately after Uganda President Yoweri Museveni and his Rwandan counterpart Paul Kagame met in Angola to iron out their differences in August. But after a few days,  telecommunications authorities in both countries blocked access to each others news websites.

Are they looking for another opportunity to go back to smuggle like moths drawn to a fire only to be burnt?
Report to administrator