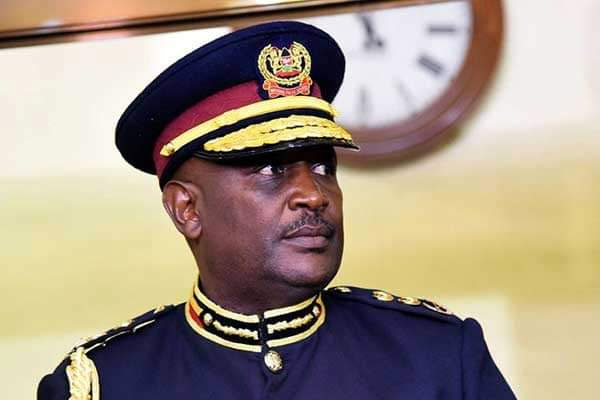 No denials, no defence of their own or justification of their brutal actions. Kenya police boss Hilary Mutyambai, in contrasting reactions to Uganda’s police, has condemned and ordered for the suspension of four police officers caught on camera brutalising a student of Jomo Kenyatta University of Agriculture and Technology (JKUAT) yesterday.

The reaction to the brutality of the police force on either side of the border could not have been more contrasting especially given that the reactions came out on the same day. In Kenya, the inspector general of police Hilary Mutyambai condemned the brutality of his police officers and ordered for action taken against them within 24 hours.

“The National Police Service wishes to inform that the four officers who were caught on camera meeting excessive force on a JKUAT student have been identified and consequently interdicted from service as per police procedures. Further action and other internal disciplinary processes will follow the recommendations of the Internal Affairs Unit investigation. We commend the individual who had the presence of mind to record the incident and thank all Kenyans who made it to go viral.” Mutyambai said in a statement.

JKUAT students had reportedly blocked Thika Superhighway, harassing motorists and other road users. The students were protesting against the lack of security at the campus and surrounding areas. Four police officers were captured on camera taking turns to kick and hit the male student in the chest and on the head.

"It is important to note that all police officers have gone through a rigorous and professional training on management of riots and unlawful assemblies. Officers have also been trained on the need to respect human rights and fundamental freedoms, and that, use of force must be legal and of necessity to the needs of justice, it must be applied to the extent that it remains proportionate to the gravity of the offence and with full accountability." Mutyambai added in another statement.

Although the latest Uganda police brutality against Kizza Besigye occurred a week ago on November 4, today Tuesday police came out to defend and justify the actions of their officers. On Monday last week, police directed a highly pressurised water cannon at Besigye who was waving to supporters in Kireka from the top of his vehicle's open roof.

The pressure of the cannon nearly swept Besigye away - with the police force coming under heavy criticism for its now seemingly standard highhandedness against dissenting voices. In command of the operation was SSP Agero who also smashed down Besigye's windscreen using a gun and ordered for Besigye to be pepper-sprayed so as to force him out of the vehicle.

Police spokesperson, Fred Enanga, said what Besigye got he fully deserved because he adamantly parked in the middle of road disrupting traffic flow, especially at Spear Motors junction. Police says all engagements with Besigye hit a snag and available measures had to be used to clear the road to allow the smooth movement of other road users.

0 #1 rubangakene 2019-11-12 23:33
Well done for taking immediate action on the spot rather than waiting for the president's say-so; this is how management should be, using your own brain and initiative.
Report to administrator
0 #2 Lakwena 2019-11-14 14:10
While brutal Kenyan policemen/women are punished for brutalizing students, ours are patted on the back, praised for a job well done and promoted.
Report to administrator