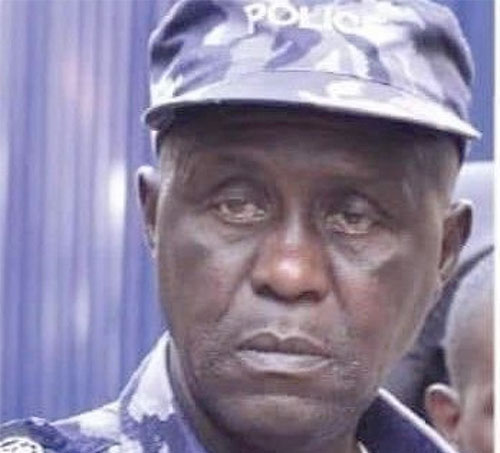 Police has commended senior superintendent of police (SSP) Rashid Agero, who, nearly swashed away Dr Kizza Besigye unto the tarmac for a job well done.

On Monday last week, police directed a highly pressurised water cannon at Besigye who was waving to supporters in Kireka from the top of his vehicle's open roof. The pressure of the cannon nearly swept Besigye away - with the police force coming under heavy criticism for its now seemingly standard highhandedness against dissenting voices. In command of the operation was SSP Agero who also smashed down Besigye's windscreen using a gun and ordered for Besigye to be pepper-sprayed so as to force him out of the vehicle.

Despite the criticism and calls for action against Agero by among others; speaker of parliament Rebecca Kadaga, Catholic bishops, human right activists, police has instead patted him on the back and said there is no need to prosecute any officer in operation on the said date. According to police whatever they did was within the law and a standard operations procedure of handling riotous crowds.

Police spokesperson, Fred Enanga, said what Besigye got he fully deserved because he adamantly parked in the middle of road disrupting traffic flow, especially at Spear Motors junction. Police says all engagements with Besigye hit a snag and available measures had to be used to clear the road to allow the smooth movement of other road users.

To God be the glory. @kizzabesigye1 survived death by a whisker at the hands of the @PoliceUg. This is a narrow escape. We give thanks to the Lord that the unwanted didn't happen. Let's behave better as the election calendar runs faster to 2021.@NRMOnline @FDCOfficial1 @UgandaEc pic.twitter.com/9lOJDLNncG

Addressing the media, a day after the incident, Besigye said he was only saved by people inside his car that held his legs because the cannon was going to wash him away. Enanga said the Anti-riot police also known as Field Force Police used the well-known measures to deal with defiant people. These measures, according to Enanga, include breaking car glasses, windows or doors to gain access or enter a house, a car to remove or arrest a person deemed a threat.

"There was heavy disruption of traffic for three hours just because of the defiant Besigye," Enanga said.

Police said whatever happened Besigye had already been planned for it in advance, a reason he had reportedly removed hooks from his motor vehicle thus it could not be towed away. Besigye was heading to a function organised at Namboole stadium but police blocked the venue insisting that the stadium was under renovation. Enanga said Kira Municipality MP, Ibrahim Ssemujju Nganda and FDC president Patrick Oboi Amuriat, obeyed police’s guidance but Besigye refused.

The brutal arrest of Besigye and FDC members was condemned by human rights bodies and activists to know if the multi-party system was still viable since other political parties are not allowed to conduct their activities.

Besigye and other FDC members have since started a campaign to raise one million signatures from Ugandans to have President Museveni and other security officers dragged to International Criminal Court based at Hague in the Netherlands.

0 #1 kabayekka 2019-11-12 16:30
One reckons it is the driver of that nasty vehicle that should have been apprehended and given an automatic traffic fine and not brutally insult a car passenger, that was standing innocently in that car in the road.

That is common sense policing. Nothing to do with modern professional policing in a city of Kampala where drivers can spend some hours stranded in unavoidable traffic jams every day.

Anybody could see that the driver of Besigye's car was trying to speed off from the tear gas but could not move because of a stationary traffic jam ahead.
Report to administrator
-2 #2 Mubiru 2019-11-12 16:58
Unlike Bob Wine, at least Kizza Besigye's businesses are untouched. Winnie, Besigye's wife, unlike Kyagulanyi's wife, is firmly connected to the top and is eating as if the world is about to end.

You cant blame -those who believe that these are their (NRM) gimmicks (katemba) to dupe the gullible Ugandans that Govt and Besigye are not the same. Uganda is full of comedians many of whom are in parliament.
Report to administrator
+1 #3 Akite 2019-11-12 19:56
Quoting Mubiru:

Unlike Bob Wine, at least Kizza Besigye's businesses are untouched. Winnie, Besigye's wife, unlike Kyagulanyi's wife, is firmly connected to the top and is eating as if the world is about to end.

You cant blame -those who believe that these are their (NRM) gimmicks (katemba) to dupe the gullible Ugandans that Govt and Besigye are not the same. Uganda is full of comedians many of whom are in parliament.

Rubbish!!!!!
Report to administrator
0 #4 rubangakene 2019-11-12 23:41
Brutality breeds brutality; this is the same thing that happened during Amin's time, and replicate during Obote 2 and now this government is going further by "congratulating" a similar brutality.

One day 'the boot will be on the other foot and whose "backside" will be walloped'? NO CHANGE/PROGRESS IN DEMOCRACY!
Report to administrator
0 #5 Lakwena 2019-11-13 08:15
Evil rules in Uganda. Even by the look in his eyes here above; Rashid Agero is evil in form and substance.

In other words, he has a dark soul. Otherwise between Gen Kayihura and Ochola, what has change? Nothing because, the spirit and principle of terror and brutality of the regime is the same: order from above and spreading terror and random violence is Mr. M7's trademark.

But according to Mr. M7's recent edict on the Hammurabi law of (an eye for an eye, tooth for tooth), when the table one day turns, the same law will be visited on the Afande Enanga and Agero of this country.

E.g. a water canon on Enanga's fat back and a gun butt or a brick on his windshield will be a deal.

In other words, according to the law of reciprocity, "thou shall not promote or execute what you would not like others to do unto you".
Report to administrator
0 #6 Lakwena 2019-11-13 08:26
But Afande Enganga, it is self evident that it is always the "Riot Police" officers who riot at peaceful Ugandans. It is the same Riot Police that block roads and cause hours of traffic jam.

In other words, Afande Enanga is a soulless sadist, who blames the violent victims of riotous police.
Report to administrator
0 #7 Lakwena 2019-11-13 09:28
Two weeks ago the Riot Police went to Makerere and rioted by beating up students and right up their Hall of Residences and smashed their 2nd hand domestic appliances.

In Lumumba Hall, they even rioted at a disable student broke his flask, kaTv and beat the heaven out the young man.
Report to administrator