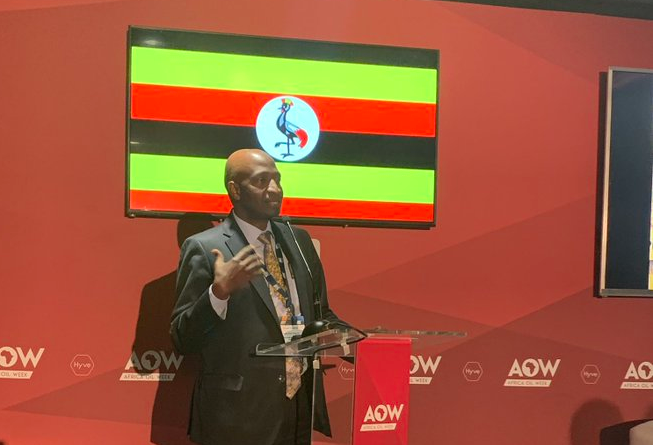 Ernest Rubondo, the executive director of the Petroleum Authority of U

Ernest Rubondo, the executive director of the Petroleum Authority of Uganda (UPA) has explained why the country is taking long to sign the Final Investment Decision (FID) that will see the release of money for actual oil production.

Speaking at the sidelines of the public hearing on the Environment and Social Impact Assessment Report (ESIA) of the East African Crude Oil Pipeline (EACOP), Rubondo said there is no way they can sign an FID for the two projects of Tilenga and Kingfisher oilfields without concluding on the pipeline and the refinery because they affect each other.

“You cannot build the pipeline when you’re not sure of the oilfields,” Rubondo said.

He explained that because the projects are also supposed to run for a minimum of 25 years, the relationship that the government is trying to get into with the oil companies must be built on firm grounds to ensure that both sides are comfortable that the venture they have entered into will last without getting challenges along the way.

“The companies that invest in these projects expect a return on their investments which can be big, medium or small so they will work very hard to ensure that there is a high return on their investment yet at the same time the government has an interest in these projects benefitting the country. You can see that those two interests have to be aligned which takes time. These three reasons explain why the FID is taking longer time than expected,” Rubondo said.

More than a month ago, Total E&P announced that it had suspended all oil-related projects in Uganda after its deal with Cnooc to buy 21.5 per cent stakes of Tullow oil failed.

Government demanded $185m in taxes and another $167m in capital gains tax which the oil companies objected to. The minister of state for Minerals, Peter Lokeris said their discussions with the oil companies about the stalemate will soon bear fruits.

“We have told them what is supposed to be done in regarding taxes and they are saying they have invested a lot of money in the project. But the discussion is still on and in one month we shall have agreed,” Lokeris said.

Meanwhile, project affected persons (PAP) in the ten districts where the pipeline is going to pass have complained about delay in compensation for their land and property that would be taken to facilitate the passage of the crude oil pipeline.

Speaking at three public hearings organized by PAU, local people and their political representatives all voiced dissatisfaction about the delay in payment.

“You have earmarked our land for your use, therefore, we can’t do anything productive on it but again you’re not paying us so that we move to other areas. What do you want us to do?” lamented Leokadia Nandawula, a resident of Mubende district.

“Tell us when you are going to pay us because we are getting anxious. Some of our people are even using their valuation documents to get small loans so that they can survive. By the time you pay, many will have used all the money and have nowhere to go,” said William Museveni, another resident of Mubende.

For Joseph Senkusu Sentayi, the LC V chairman for Kakumiro district, the delay in compensation has even attracted land grabbers who with the support of officials from the ministry of Lands have got new titles on people’s land.

“Much of this land in Kakumiro district in Bugangaizi county belong to Baganda absent landlords. But these people have for a long time never claimed this land. But these days, someone turns up with new titles and you wonder how they got them,” Senkusu said. 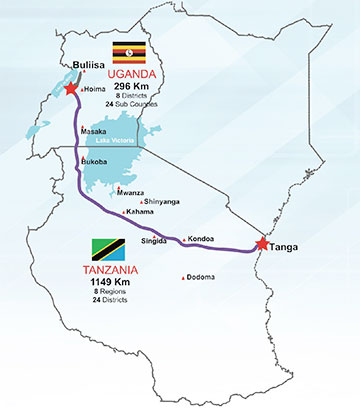 Bugangaizi and Buyaga county once belonged to Buganda kingdom but were lost after the 1964 referendum where they voted overwhelmingly to return to Bunyoro. However, the land had been given to Baganda chiefs who after the referendum many returned leaving the land behind although titled in their names, with different settlers.

Responding to the delay, Rubondo said land acquisition is a process that needs time to execute.

“You first identify the land you think you’re going to use and then you go and check whether it's environmentally acceptable then you now go-ahead to acquire it. For the people to get compensated, the chief government valuer must accept otherwise the value will be challenged in future,” Rubondo said.

He added that because there are many people along the pipeline with different reasons for objecting to the set value, this is slowing the process. Aziz Mulima, the high commissioner of Tanzania to Uganda revealed that the process of land acquisition in Tanzania had progressed significantly due to the land tenure system.

“Unlike in Uganda, for us land is under the custody of the president, and when we have such social and developmental projects, we compensate persons for the activities and developments on the land,” he said.

The high commissioner also revealed that Tanzania had concluded the ESIA study, which is under review by the respective government entities.

Francis Amooti Kibuuka, the LC V chairperson of Mubende district called upon the developers EACOP to consider stringent environment safety measures, before, during and after the construction of the pipeline.

“The developer should take into consideration that most areas along the pipeline route are already water-stressed. Therefore, the mitigation measures should be adequate to prevent water shortage challenges,” he said.

Rubondo said that the purpose of the public hearings is to ensure that the stakeholders from the 10 districts where the pipeline will traverse in Uganda and the general public verify the accuracy of the report.

“The public hearings are an avenue where the public’s concerns are heard to ensure that they are addressed by the developer and relevant government entities. They are also part of the review process of the ESIA report to allow NEMA make a fair and just decision on the report.”

The EACOP ESIA public hearings that have been held now bring the total of public hearings held for the oil and gas sector project to seven having had two hearings each for the Tilenga and Kingfisher development projects in November 2018 and June 2019 respectively.

“This is an important milestone because we are now close to the engineering, procurement and construction phase, having also concluded the FEED study and land surveys for the EACOP project.

The next stage is to ensure that we conclude the commercial frameworks for the project, a process which is now progressing,” he said.

Dr Tom Okurut, the executive director of NEMA assured stakeholders that all feedback on the report will be reviewed to guide the decision on the approval of the report.

The EACOP system covers an estimated length of 1,443km from pump stations one (PSI) in Hoima district, Uganda to the Maine Storage Terminal (MST) located North of the Tanga, Tanzania.

From PSI, the pipeline traverses southward along the western side of Lake Victoria, crosses the border into Tanzania, continues to the south end of Lake Victoria and turns east continuing across the Rift Valley at the Tanzanian divergence, continuing East to its termination North of Tanga Port on the Indian Ocean coast.

In Uganda, the pipeline covers 296km.

0 #1 kabayekka 2019-11-09 12:18
If these two poor African countries had built a speeding railway line or a dual carriageway or a motorway during 2008 throughout these locations of 1443 km, great business and modern communications would have upgraded greatly within these African populations by now 2019.

The issue of pumping oil would still be in the pipeline if it has to move along with the above infrastructure even around the years 2030/50.

One would advise these modern oil companies to go for it because they are able to build these social structures in 3/4 years time with the modern engineering technology available to the world today.
Report to administrator
0 #2 rubangakene 2019-11-09 16:57
Our generation might not live to see this oil with all these foot dragging and so on, President Magulfi called it 'greed' on our part.

No amount of conferences, meetings by so called "stakeholders and experts" will solve this delay; it is all hot air and "unmediated cluster [censored]". Let the oil flow now and we flourish as a nation!
Report to administrator
0 #3 Lysol 2019-11-09 21:37
The DRC(aka Zaire) has lien (right to hold) on that oil for $10 billion because of what Uganda owes after looting the rouseruest of Congo back in the 90s invasion.

The case is still pending with the ICCJ. Uganda will have to first pay the 10 billion dollars to the DRC before we start getting that oil dollars

Congo will get what Ugandan has to pay or there will have to go to another war. Not to mention the dispute over the Lake Albert oil.

That new president of Zaire seems to be weak/naive and can be easily manipulated by the con old corrupt fox Museveni.
Report to administrator
0 #4 kabayekka 2019-11-10 07:49
rubangekene I think you know a bit of the bible.

Even if you are broke, do not hurry on and start selling all your silver ware(assets) The rich man had two sons.

One at once demanded his inheritance and went to spend it. Time did not treat him well and he went broke.

Lucky the story goes that this son had an understanding father still alive to fall to again. For Uganda, if all its Oil is taken away without much benefit from it other than being left with an obsolete metal pipe of 1443 km long right in the vast continent of Africa, who in his right mind as a small country in Africa will help Uganda back on its feet?

It is worthwhile delaying to pump this oil and instead to concentrate on building infrastructure that might support this industry in the future of 50 years to come.
Report to administrator
0 #5 Apollo 2019-11-11 16:12
I said this six years ago and I will repeat it here.

As long as Gen. Museveni has control of the Oil, the Development Partners will never permit him to exploit it because they believe he wants to use it to consolidate a party-state, without fear or shame.

What Gen. Museveni needs to consider may be to do what King David did in the Bible. However much David desired to build the Temple, it was not to be. David did the next best thing: he prepared all the construction materials and plans and left the rest to his successor. 1 Chron.22.
Report to administrator