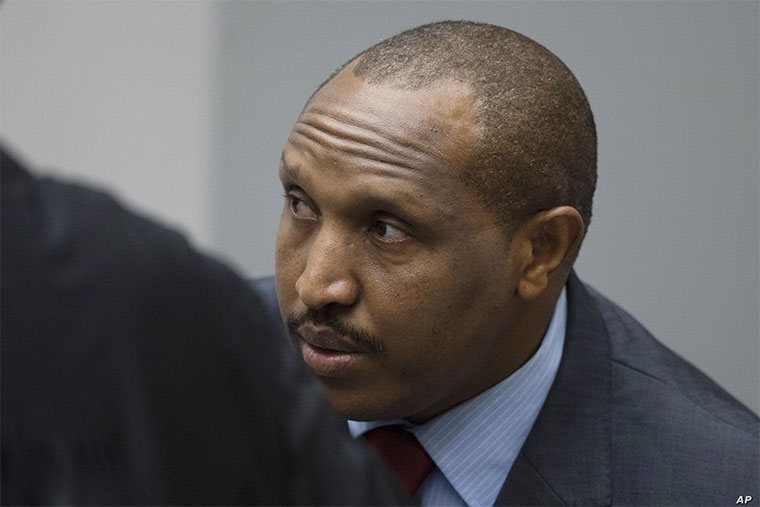 ICC judges found Ntaganda guilty of 18 counts in July, including murder, rape, sexual slavery and enlisting child soldiers. The court in The Hague said Thursday in its ruling that judges determined individual sentences for each count, which if added together would total 218 years in prison.

But ICC rules cap sentences at 30 years. Judges may decide to impose a life sentence instead, but in their ruling, the judges said because many of the individual crimes involve overlapping conduct, they did not warrant a life sentence.

Ntaganda has been in custody since March 2013 and that time is being deducted from the 30-year sentence. During his trial, Ntaganda denied being a killer and a war criminal, saying he never attacked civilians and "always protected them."

Prosecutors said he commanded a rebel group, the Union of Congolese Patriots (UPC), that killed, raped and exploited people in Congo's eastern Ituri province in 2002 and 2003. A lawyer for victims told the court that girls as young as 12 were forced to serve as so-called wives to senior rebel commanders.

The attacks by the UPC allegedly targeted specific ethnic groups such as the Lendu, Bira, and Nande. One alleged co-conspirator was Thomas Lubanga, who was sentenced to 14 years in prison in 2012 after the ICC convicted him of conscripting child soldiers.

Ntaganda remained at large for seven years after his indictment was issued in 2006, irritating judicial officials with occasional appearances in public. He co-founded the Congolese rebel group M23 in early 2012. In a surprise move, however, he surrendered at the US embassy in Kigali, Rwanda, in March of 2013. Experts say he may have turned himself in because fighting within M23 caused him to fear for his life.

These thugs have been torturing and killing Ugandans for years .Time has come to hold the dictator group accountable.
Report to administrator
+2 #2 Kikomeko 2019-11-09 14:01
Also known as Pilato in Eastern Congo...That Beast with the Likes os Sultan Makenga.and Laurent Nkundabatware..killed more than 2.000.000 Congolese.

There GOD fathers are Now Untouchables in State Houses Commanding the Remaining Forces of M23 rebells now with Ugandan Passports and Ndangamuntu killing Wanainchi with Impunity.

These Cold-Blooded Beasts will never Stop there Trade before Citizens Stand Up and Defend Themselves...The Western World is only interested in Resources not the Lives of Africans..Rise UP People before it is Too Late..
Report to administrator
+1 #3 rubangakene 2019-11-09 17:04
Just imagine; this man is going to "enjoy" himself in a European prison living with all the amenities at his disposal.

He should be serving the prison term in Rwanda with hard labour where the heinous offences were committed, what do you think?
Report to administrator
0 #4 Akot 2019-11-10 00:14
Quoting kirya:

m7 and his killers have not faced the icc.

These thugs have been torturing and killing Ugandans for years .Time has come to hold the dictator group accountable.

Only Ugandans, have the power to dislodge Museveni from post, bring him to ICC, knowing it wil only be through a real government representing Ugandans & not the triballydivided a ruled zone it is!

ICC cannot bring Museveni to jsutice as Ugandans are alright with his divisive system of rule, not forgetting it's Ugandans Museveni uses to be the demon he is!

When will Ugandans realise they MUST say NO to the tribalistic system, throw Museveni out, put in a government internationally accepted, then bring Museveni to justice?

How can ICC bring Museveni to justice when Ugandans allow him to rule in peace through fake elections, fake parliament & through the tribalistic system?
Report to administrator
0 #5 Akot 2019-11-10 00:18
Kikomeko, agreed, so,

Why are Ugandans helping & letting their country be owned by these foreigners, migrants who are turning the zone into their own country & where will Ugandans go when these demons finalise conquest, especially as it's Ugandans handing over their land to them?
Report to administrator
0 #6 Akot 2019-11-10 00:28
rubangakene, understood, but,

It takes good governance with know-how, to bring demons to justice!

So far, change of leaders in Africa has proved they only come for themselves, live comfortably while the people wait in vain & this is so because Africans are not actors in how they are governed for how long... they just wait!

See Ugandans have no alternative, won't take chance with 1 of their own & still expect Museveni to finally serve them, after 33 years of failure!

Worse, Ugandans are the last to be aware the tribalistic system is a death trap for them, but heaven for Museveni as long as he lives!