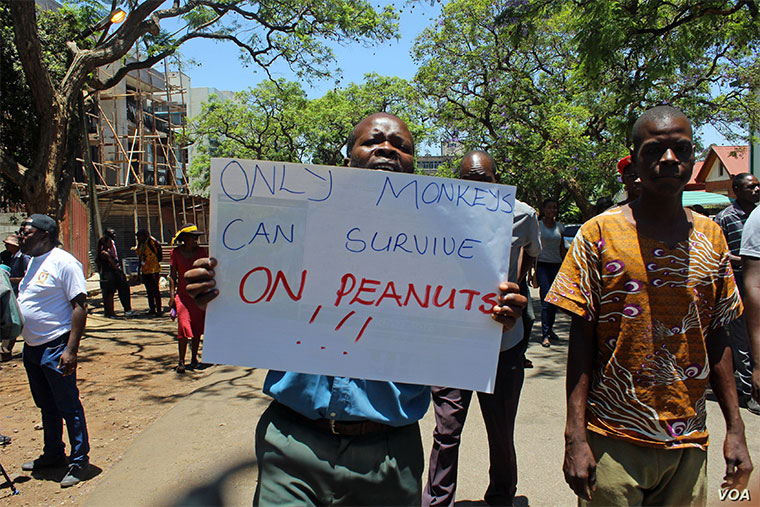 Zimbabwe's state workers took to the streets Wednesday to protest their low salaries and high inflation that are making it hard for them to survive. The government says it is aware of the workers' plight, but does not have the funds to raise salaries above the poverty line.

Government workers gathered in Harare to protest salaries they characterize as “peanuts.”

Webster Tabvemhiri was one of the demonstrators.

“My salary is now nothing; you can’t buy three items, even three bottles of two litres with my salary.  So I can’t survive with that because I need rent, I need transport, the combis (minibuses) cost ZWL$7 one way – to and from ZWL$14,” said Tabvembiri.

After years of relying on the US dollar and other foreign currencies, Zimbabwe's government reintroduced its own currency this year, called the bond note. The average government worker gets a salary of about 1,000 bond notes per month, equal to under $100. Trade unions say workers need about $700 per month to survive.

Ahead of Wednesday's protests, Information minister Monica Mutsvangwa said the government knows its workers are struggling.

“Government does not dispute the need to give the cost of living adjustment to its workers but was faced with various competing national demands. These include payment of annual bonus that will take a significant portion of resources and due to revenue restricted inflows will be staggered between November and December 2019. And also the need to import grain to supplement grain reversals, those are some of various competing national demands," she said.

She said the government would give a 13th check to its workers as part of efforts to ease their situation. But David Dzatsunga, a spokesman for the government workers, told the protesters that there was the need for continued pressure on President Emmerson Mnangagwa’s government to address citizens’ concerns.

He said the current “austerity for prosperity” program is not working.

“Our situation is dire, everyone knows that we are severely incapacitated and we are facing an existential crisis, a real crisis of existence. Let’s keep on having these conversations, let's unite, let's talk together those who are here, and those not present, that the problem we are facing, it needs us to be united because those who are oppressing us are united,” said Dzatsunga.

Meanwhile, on Tuesday night, the government announced that it had fired all 77 doctors who went on strike in September to call for an increase to their less than $200 per month salary.

The corrupt M7's regime does not give a shit about it but would rather prefer to beat and shut up the opposing voices.

Who give a shit about Zimbabwe? Uganda has its problems to take care off.
Report to administrator