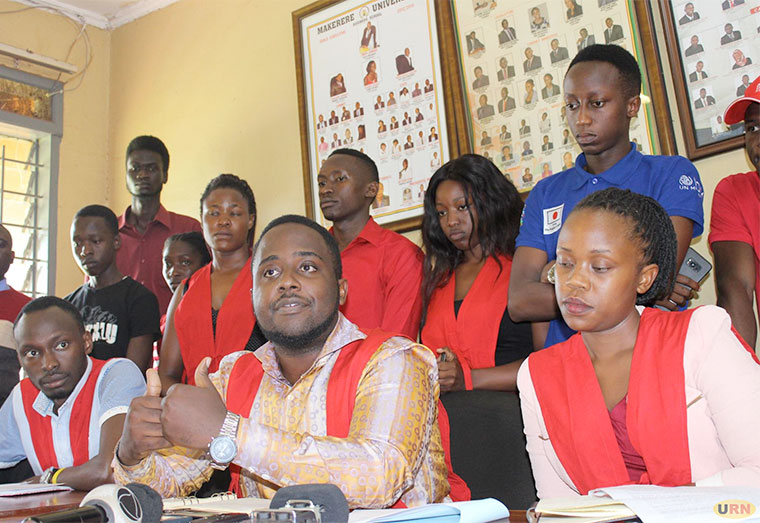 Makerere University Business School (MUBS) students have threatened to mobilise their colleagues at all public universities across the country to protest against 15 per cent tuition increment policy after next week.

Under the controversial fees policy, an annual 15 per cent cumulative increment has been imposed on all courses at Makerere University for the next five years. The policy sparked off student protests from October 22 with the army and police responding with highhandedness against students and journalists. Parliament has been tasked to review the policy and offer guidance but now MUBS guild leaders say they will never accept the increment especially at the time when the government is carelessly spending money on what they called non-priorities.

Romulus Tusingwiire, the MUBS guild president, says government’s claim that it is unable to fully fund public universities hence the fees increment is incomprehensible. The student leaders questioned the government’s interest in the tuition hike at both institutions, saying the government has set its priorities upside down. Tusingwiire argues that every day, they see the number of ministers, legislators and political positions multiplying.

He disclosed how a student at MUBS confided in him that his parents had advised him to apply for a dead year due to their inability to raise the required fees, saying many students are experiencing similar financial hardships.

"One time we had 100 MPs but now we have 450 MPs sitting in the house which means that all 450 MPs need vehicles worth Shs 400m. If you do simple mathematics if you multiply 400 vehicles that have to transport them and you add also their fuel and their transport costs. And yet government is coming out to tell us there is no money to fund education. Even us students, come out and help us. When we see one party benefiting from the whole accolade, we, us the youth of tomorrow lose hope in the government because we’re going to have more students drop out because they have no fees. Are you sending them to a place of hope or to a place of no hope?" said Tusingwiire.

Ezra Nuwenshaba, also a student at MUBS says students are disappointed by government’s support for the 15 per cent tuition increment while ignoring excesses in public administration.

Nuwenshaba faulted the government for spending colossal sums of money on public administration through the creation of more districts, which he says has expanded the number of legislators and local government leaders thereby straining the available financial resources.

“As per now we are in over 100 districts, which are calling for more MPs and take up the positions and increasing the budgets and the burden of the government to pay them. I believe this is the reason as to why the government is squeezing every penny out of our parents to actually pay these people that they are bringing in these administrative positions,” Nuwenshaba argues.

The students also say they are at the best business school in the country but have been ignored by government in favour of political appointees. They argue that they can be better advisors compared to 'struggling' artists like Butchaman and Catherine Kusasira, who, President Museveni recently appointed as presidential advisors for ghetto and Kampala affairs respectively.

Nuwenshaba says there is no reason why youth at the university would oppose Museveni’s government if they have subsidized and regulated fees.

"The president is giving those of Catherine Kusasira, Full Figure, Buchaman and giving them heavy cars and heavy money. But we feel that if the president wishes to have the best citizens, he should bring these funds instead and revert them in the education sector," he said.

"Subsidise education, reduce on the number of MPs, reduce on the ministers that we’re having. If you come and show me that you’re benefiting me academically, which is the aspect that am looking for, then upon which background do I oppose you? 10,000 organised mad people are better than 10 or 6 extreme intelligent people. We’re going to organise ourselves with all the public universities, with all the students. 15 per cent fees increment is a zee! We can’t allow it." Nuwenshaba said.

Allan Kelly Tabura, another student says he sells liquor in a bar in Nakawa to be able to raise tuition and sometimes he can't attend classes during the day because of sleep. Tabura intimated that many of his colleagues at MUBS go through nearly the same hustle to pay fees and stay at school, which the government ought to be aware.

He said he's disappointed that government is instead focused on the 2021 election campaigns rather than directing finances to critical sectors such as education and health.

"If you fund the president more, I hear his budget has been increased by Shs 240 billion that means that they have shifted some funds from either the education sector or health sector and they have been given to the president to campaign. Now you’re standing with the ghetto and you get advisors like Catherine Kusasira, Full Figure, Catherine Kusasira giving them much money which would have been used for the education and health sector. The government has shifted its attention from the major priorities to the minor ones because it is concentrating on the next election more than the prevailing situation." Tabura said.

Doreen Asiimwe, the MUBS guild vice president faults government for failing to provide for its citizens and largely focusing on its survival. Asiimwe is concerned about the huge number of political appointments including presidential advisors, RDCs and ministers who she says are draining the treasury and denying education sector the funds to function.

"Should we question the ruling government because it has totally failed to do its job? We’re failing on each and every other day. The Constitution of Uganda stipulates that they should have only 21 ministers but he [Museveni] has decided to try and please each and every one by having a minister from each and every tribe which I think makes it around 75 ministers and is paying them money. Let him reduce the ministers, use the money in the education sector We’re saying no to the 15 per cent increment." she said.

According to Asiimwe, most students especially girls at universities are turning into prostitution as a way of survival.

“At MUBS we females form the largest percentage of students. Actually that is why you find the girl-students are now going to these very ministers that are 'chewing' our money and they are becoming our sugar daddies because we can’t pay this tuition! How do you expect us to survive in this country?” she asked.

MUBS has over 20,000 students out of which the students’ guild leadership says only 9,500 students have fully completed their fees. The student leaders argue that the majority of the first-year students are affected.

The students leadership has organised a car wash tuition campaign this Saturday at the intuition to raise finances to support those who will be remaining with fees balances by November 19, when they commence examinations.

Hashim Kabeera, a Bachelor of Business Statistics student says they have given the MUBS Council only next week to come up with a clear position indicating there will be no increment, failure of which he says they will embark on mobilizing other public universities in protest.

+3 #1 harriet 2019-11-08 14:19
These students have talked sense. If the government listened to their concerns, the country would be well-off. But who can listen?!
Report to administrator
+4 #2 Zaitun 2019-11-08 15:08
A concerned parent after reading what the University ladies are saying should feel the chill in his or her blood!

You sent a child to the University to learn, but only to hear that they do prostitution to make ends meet!! Incredible!

Shame on Museveni family that was supposed to protect these University ladies rather than turning them to prostitutes to satisfy the sexual appetites of their Ministers and Mps; something that could not be heard of during the former regimes.

These thugs only came from their bushes to vandalise the country and eventually turn it to Sodom and Gomorah as their hiding places. What they had been practising during their youth, and while in the bush has now come to the open.

No wonder they started embarking on sending our ladies to the Middle Eastern under the pretext that they were going to work and earn fat salaries: wapi, these ladies were sent as prostitutes against their will.

We now know who the Musevenis are- modern SLAVE TRADERS.
Report to administrator
0 #3 Lakwena 2019-11-12 15:23
Mr. M7 has really bastardized education in this country. Unfortunately It is also the same parliament, which aid him in doing so.

E.g., while parliament easily gives Mr. M7 Shs.200 billion to throw around at ghetto riffraff, alias poverty; the 15% fees increment, which has triggered the current strike at Makerere University is only Shs.5 billion worth of the deficit that the university needs.

In other words, this country is on its head. Why on earth does parliament give such a budget amount of money to Mr. M7 to waste on cheap popularity, when essential priority services like higher education are going to the dogs and pigs.

Actually the whole country may need to go on strike. Otherwise nothing is going to change.
Report to administrator