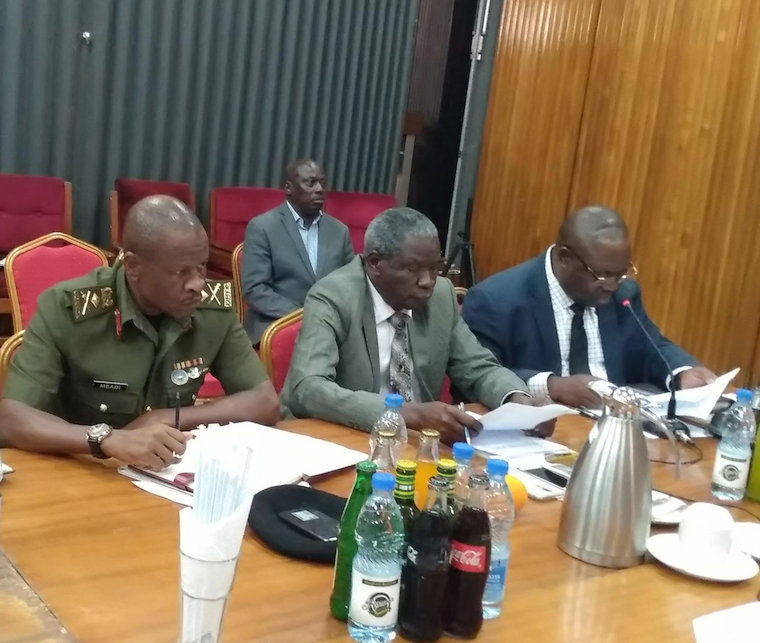 The minister of Defense and Veterans Affairs Adolf Mwesige has said that the withdrawal of the army from Makerere University will be a gradual process.

On Wednesday, officials from the ministry led by Mwesige, Lt Gen. Wilson Mbadi the deputy army commander, the minister of Internal Affairs Mario Obiga Kania were appearing before the parliamentary committee on education to answer queries of brutality against students by the army.

The army has been accused of brutalizing students who were demonstrating against the 15 per cent cumulative fees increment. On many occasions according to students, tear gas canisters were tossed into halls of residents affecting students who were not even participating in the demonstration. The army was also captured on camera flogging students and forcing them to roll half-naked on the tarmac during the strike. They also broke into student rooms in halls of residence and private hostels outside the campus.

Mwesige told MPs led by the committee vice-chairperson John Twesigye that the army that responded to the Makerere University crisis has been at the university since 2018 in the wake of murders, robberies in the country. President Museveni ordered the soldiers out of Makerere claiming he did not know about their deployment there.

Mwesige told the MPs that army withdrawal will be gradual since they do not want to leave Makerere unattended to.

"The army is withdrawing in a systematic way. This army has been deployed in Makerere for a purpose earlier. What happens if there’s a reoccurrence of the same incidents that prompted the action of the army? The answer is very clear Mr chairman because the army is deployed as and when either there is a perception of threat or whether there's is happening of the threat itself." said Mwesige.

Lt Gen Mbadi, says that the soldiers who brutalized the students are being investigated. He told the committee that the army does not tolerate any form of brutality. Mbadi also said the army was not necessarily interested in Makerere University but just used the institution as a staging area or base to for surrounding areas.

When asked about the alleged sexual assault against the students during the strike that started on October 22, minister Obiga Kania said that they have never registered any complaints formally that any student was harassed sexually during the chaos.

"From the 22nd of October 2019 to date police has neither received nor registered any complaint or case of sexual abuse and if there is any complaint it should be reported to the police," he said.

Winfred Kiiza the Kasese Woman MP questioned why UPDF appears to have deployed without knowledge of the university authorities. The officials were also questioned over reports that several people carry guns in and outside lecture rooms at the university.

Julius Achon, the MP Otuke County said that there are many guns at the university and several spies in classrooms. However, Mwesige told the committee that it is not a crime for spies to be at the Makerere as long as they are doing their job. He also told the committee that it is not permitted for someone to enter with guns inside the classrooms and if there is such a case they will follow it up.

On Monday appearing before the committee, Makerere University students led by the guild president Julius Katerega told the committee that students are intimidated by plain-clothed security personnel with guns in and outside the university premises.

m7 is is time to go let the young man Bobi Wine take over.
Report to administrator
0 #12 MR 2019-11-08 20:34
"Mbadi also said the army was not necessarily interested in Makerere University but just used the institution as a staging area or base to for surrounding areas." Since when did Makerere become a military institution/base?

Again if for security why doesn't the police take over as is its mandate?

These are signs of failed institutions and failed leadership. These fellows don't know/understand their roles & limits.

In which case they should resign or be fired by the appointing authority less he/m7 doesn't know how to appoint the right people for the job
Report to administrator
0 #13 Kikomeko 2019-11-09 13:53
Spot on Zaitun..The Almighty Leader of NRA was in love with Hitler..in 1997 he said He was a nice Guy but his mistake being trying to rule the World..Ntaganda Bosco,Sultan Makenga, Laurent Nkundabatware,Kale Kayihura, The Late Rwigyema were the Notorius Butchers of Luweero where they left 1.000.000 Ugandans Dead.

After failing to annect Eastern Congo as M23 Rebells, They were called Back to Uganda and became LDU with Ugandan Passports and Ndangamuntu..(Reason why Aronda had to be eliminated)..Today they are Continuing with there Devilish Mission of Killing Ugandans to make them Surrender to the Almighty as Bringer of Peace and Sleep..No Case to Answer GOD Presides in State House.
Report to administrator
0 #14 rubangakene 2019-11-09 17:21
We told you so, didn't we; you see, once the horses have escaped the stables on their "own steam", it is very difficult to reign them back, especially when it is their "mating season".

In this case we civilians don't have a clue what that season is but believe me it has nothing to do with Makerere.
Report to administrator
0 #15 Lysol 2019-11-09 21:45
Museveni's militias should immediately leave the compus.

May be most of them have never enjoy the academic tranquility of campus life style, that is why they want to hung around for a while and exprencine it

Leave the students alone!!!!!! The corrupt dictatorial regime is on the losing side of history.
Report to administrator
12