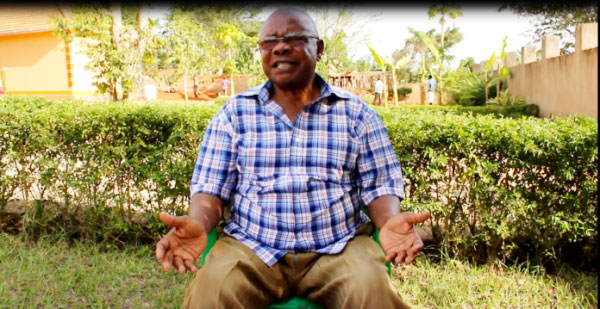 Edward Lwanga Kasole Bwerere, 85, is retired now but remains a rare jewel in the world of Education. He has been everything, a school proprietor, teacher and headmaster for most of his decades’ long career.

In retirement he has one happy experience indelibly etched in his memory: teaching children of two presidents; Apollo Milton Obote and Yoweri Kaguta Museveni. Seated in a swinging chair as he sipped on a hot cup of tea and read a newspaper at his home in Wakiso district, Kasole recalled his teaching days. Kasole is an accomplished teacher whose love for education birthed Uganda’s first privately owned school; Kampala Parents School. Over the years it became a school for children of the rich and powerful.

Educating affluent children put Kasole in direct touch with major decision makers in the country. He said in this interview however, that dealing with the rich did not prepare him well enough to teach children of two sitting presidents; Apollo Milton Obote and Yoweri Kaguta Museveni. Kasole’s experience teaching the presidents’ children started in 1981 when he received a phone call from State House.

At the time President Milton Obote had just won the presidential election. Kasole described his first meeting at State house as a nerve racking affair. He said he thought it was his last day on earth. According to Kasole, he was picked up in a Mercedes Benz dispatched from State House and escorted by two heavily protected vehicles.

Throughout the road trip, Kasole said he kept wondering what could be amiss. He remembered a Luganda proverb; ‘Bakuyita embuga si buganzi’ which loosely translates as ‘Being summoned to the palace is not necessarily a good thing’.

At State House, he said he was received by Miria Kalule Obote, the first lady at the time. Mrs. Obote welcomed a nervous Kasule warmly and informed him that she wanted to enroll her last born, Benjamin Opeto at Kampala Parents. According to Kasole, teaching Opeto also known as Ben Obote wasn’t a walk in the park.

He said Opeto wasn’t like any other pupil he had handled before. Kasole said Opeto came to school under heavy army guard and was shadowed all the time by soldiers on the school premises. In case he needed a toilet break, the young Opeto would be whisked off at break neck speed to the president’s residence in Kololo. This mode of operandi was a big challenge for Kasole. He said he decided to strip Opeto of all privileges of a first son. He said he convinced Opeto’s parents to allow him to have a life outside State House.

This included getting a home where Opeto would live like any other normal child of his age. He said the change of environment, totally transformed the boy to the satisfaction of not only his teacher but his parents. Stripped of all his privileges, eight-year-old Opeto flourished in his studies to the extent that even his parents were surprised by his grades. While teachers today might be rewarded with a bottle of soda for their efforts, Kasole got a tax exemption for his schools.

In 1985, Obote’s government was over thrown in a coup led by Brigadier Bazilio Olara Okello and General Tito Okello. The coup separated Kasole from Opeto who was in primary four. Opeto’s departure left Kasole with fond memories of an eight-year-old boy who was determined to follow each and every one of his rules. He said the boy was scared of being kicked out of the prestigious Kampala Parents.

When Museveni took over, he sent four of his children including Muhoozi Kainerugaba, (then in primary six) and the youngest Diana Museveni in Nursery school to Kasole. He said that time round he had no fear of handling presidential children because there were no cars and summons to State House.

Having come from Sweden, Kasole said Museveni’s children had to be taught English.

“When they came they didn’t know English. This really bothered the elder boy since he was in P.6. But the moment, they learnt the language, I didn’t have any academic problems with them,” Kasole recalls.

He said the children carried packed lunch but also enjoyed school meals. Kasole said the two presidents were involved in the learning of their children. With a far off look in his eyes, Kasole said parents these days should be ashamed of the way they look after their children.

“Some even never check their [children’s] homework yet they don’t have the huge responsibility of running an entire country,” Kasole said. He recalls that President Museveni was a hands-on parent who always took time off to check his children’s home work.

Asked what his secret was, Kasole laughed and shook his head. He simply said he made pupils his friends.

“I knew all my learners by name and I used to talk to them. When I noticed that your class work was not good, I visited your home and asked your parents to allow me to talk to you,” Kasole said.

After rubbing shoulders with two of the most important men in the country, Kasole described his experience as a blessing from God. “I thank God for the chance he gave me, a nobody to be able to educate those children. I did nothing to deserve it but I am happy I had a hand in making them what they are today,” Kasole said.

Today, Kasole’s charges are influential people. Benjamin Opeto is a pastor while Lt. General Muhoozi Kainerugaba is the Special Presidential Advisor on special operations. Natasha Karugire is a fashion designer and a private secretary to President Museveni on Household Affairs.

Patience Rwabwogo is a pastor at the Covenant Nations Church. Diana Kamuntu recently made her debut as an actress in the film 27 Guns in which she acted as, Janet Kataha Museveni, her mother.

+1 #1 Daniel Kadambi 2019-11-07 23:09
His contribution towards the Ugandan education sector will always be appreciated.
Report to administrator