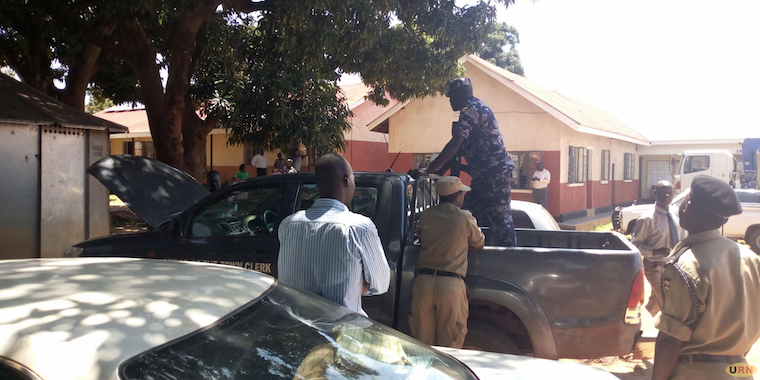 Court bailiffs on Monday impounded a vehicle that was being used to distribute Primary Leaving Examinations (PLE) papers to schools within Gulu municipality.

The Double Cabin truck, registration number LG-001117 attached to the town clerk's office was the only vehicle transporting papers to thirty examination centers within the municipality.

But Falcon X Auctioneers and Bailiffs led by Richard Ouma stormed the municipal yard where the vehicle was temporally parked and impounded it arguing that it was attached over an unpaid Shs 18 million debt.

Ouma said that Gulu Municipal Council attached the vehicle among its properties after losing a court battle to Sam Otim, a resident of Gulu town. In 2013 Otim won a civil suit 71/2013 against the municipality who had demolished his pit latrines in Pece Division during a municipal road opening.

Court on January 31, 2018, ruled that Gulu Municipal Council pays Otim Shs 30 million in compensation of the damage caused within the months of October, November and December 2018.

The municipal council however only paid Shs 12 million in October last year leaving a balance of Shs 18 million. Ouma told URN that the Municipal Council had failed to clear the remaining balance to date - prompting them into actions of impounding some of its attached properties which included the vehicle.

Edward Kiwanuka Gwavu, the Gulu municipal town clerk rushed at the municipal yard while the vehicle was already in custody of the bailiffs for several hours as other councilors demanded that it must not be taken.

Kiwanuka pleaded with the bailiffs to release the vehicle to help serve the candidates citing that the payment was only delayed by the new system of Integrated Financial Management System which requires authorization from the central government.

The vehicle was later released after two hours following the town clerk's plea who pledged that the council will effect payment anytime this year. Fiona Atim, the Gulu municipal inspector of schools said the process of reclaiming the vehicle greatly delayed disbursement of exams papers to some of the schools.

PLE commenced across the country on Monday with candidates sitting for the Mathematics and Science papers.

0 #1 kabayekka 2019-11-05 10:34
So now whom can one blame for such a large expenditure of the tax payer's money, when in 2013 these municipal officials should have called Mr Otim to sit down with them and amicably came to a better African neighborhood understanding about opening up a road.

The council would have spent only 3 to 4 million shillings to build, else where, a new toilet facility for Mr Otim away from the path of a new road for this poor community of Acholi land.
Report to administrator
-1 #2 rubangakene 2019-11-05 19:39
SABOTAGE! This was a heartless action on the part of the bailiff; creating an atmosphere of panic to the staff and those youth waiting to sit for the exams.

What sort of people are these,eh? A "treasonable offence" in my book. Now 'suppose' the kids do not do well in the exams, there might be consequences from the parents' point of view!
Report to administrator