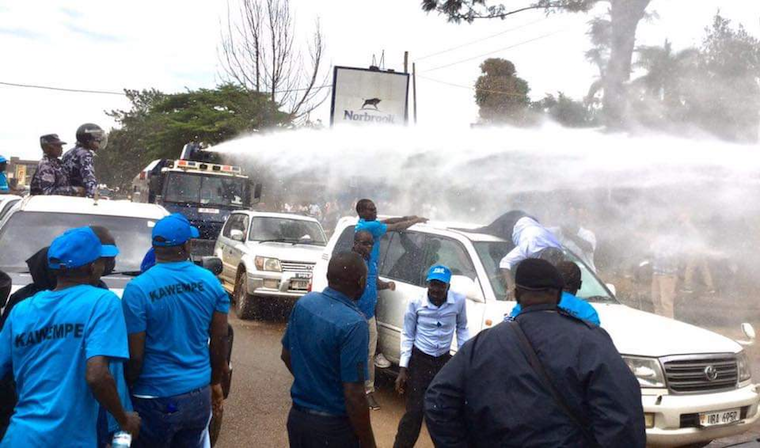 Former Forum for Democratic Change (FDC) president Kizza Besigye was nearly swept away unto the tarmac by a police water canon swash as he waved to his supporters from atop his car in Kireka.
Trouble started after security blocked a planned FDC party conference at Mandela national stadium (Namboole). Heavily armed police and military officers cordoned off the stadium and turned away whoever approached the facility.
This angered the FDC supporters who decided to march in a procession from Namboole to their party headquarters in Najjanankumbi. Police tried to stop the procession on the busy Kampala-Jinja highway in vain.

To God be the glory. @kizzabesigye1 survived death by a whisker at the hands of the @PoliceUg. This is a narrow escape. We give thanks to the Lord that the unwanted didn't happen. Let's behave better as the election calendar runs faster to 2021.@NRMOnline @FDCOfficial1 @UgandaEc pic.twitter.com/9lOJDLNncG

FDC party leaders some of them on foot and in vehicles soldiered on, attracting heavy crowds which prompted police to use tear gas and live bullets to disperse them however the numbers kept growing. The impasse lasted for at least four hours.
To seize control of the situation, police tried to arrest the leaders of the procession including Kira Municipality MP; Ibrahim Ssemujju Nganda, who is also the FDC party spokesperson, but he disappeared in thin air. A defiant Besigye continued waving to the growing crowd from the open roof of his vehicle.
Police then blocked his vehicle with the help of over six police patrol vehicles and tried to tow the car in vain forcing them to bring a breakdown. Some of the chains used to tow Besigye’s car broke as the crowd cheered the four-time presidential candidate who was still waving to them from his vehicle's open roof.
With the help of a water cannon, police later managed to force Besigye out of the vehicle and bundled him into a police van, which sped off to Naggalama police station. No charges have been preferred against Besigye. Police also arrested several other FDC party members and youths that had joined the procession.

However, police have repeatedly broken their meetings citing failure to comply with the Public Order Management Act. Recently, Besigye and a number of his supporters launched a campaign dubbed ‘Tubalemese’, saying it will help the opposition to achieve their goals.

His efforts are surely bearing fruits in as far as demystifying Musevenism is concerned. Ugandans must do themselves a favour and understand this mans message and focus.
Report to administrator
-1 #2 Wainanci 2019-11-05 01:27
Thanks to the Police for maintaining peace and order.

Thugs like defeated FDC former leader should not be allowed to make trouble and disturb peace and order.

What if every defeated politician is allowed to stage protest and disrupt peace.

Kizza is just one dumb imposter whose aim is to disturb the people and do nothing else for the country.

Oh yes,he joined another thug called Bobi Dingo Gringo Dog whose task is to mislead youngsters in believing that he can do miracles

He is broke crook who together with Kizza Ezza is just making circus to amuse general public.Evidence? What goodness did they bring to Uganda? Billions of dollars! From whom? Hahahaha...liars and cheaters...losers.
Report to administrator
+1 #3 sula 2019-11-05 14:32
1- The 2007 inter- tribal violence in Kenya was not an accident.

2- The Rwanda genocide was not an accident

3- The Kayunga riots and the inter -tribal exchanges that arose were not an accident,
With such arrogance and primitivity still the order of the day - we should never get surprised if something similar happens in Uganda.
Report to administrator
0 #4 Lakwena 2019-11-07 11:07
In their reckless and brutal handling of "peaceful demonstration/procession" by the opposition, one of these days the police/military may end up killing Dr. Besigye.

E.g., suppose on that day, due to the blast of the water canon Dr. Besigye had fallen over and he was run over by his own moving vehicle, what would the government tell Ugandans and the world?

At this rate of e.g. brutalizing even harmless university students, including those with severe disability (the blind, deaf and immobile) this country is at the brink of tipping over.

In other words, the outrage from such tragedy/accident will set this country ablaze. And Mr. M7 will never forgive himself for not having handed over power peacefully long time ago.

They say that, if not wise, your favorite meal maybe the one that will kill you. It is the obsession with raw power that will destroy Mr. M7 and handlers.
Report to administrator