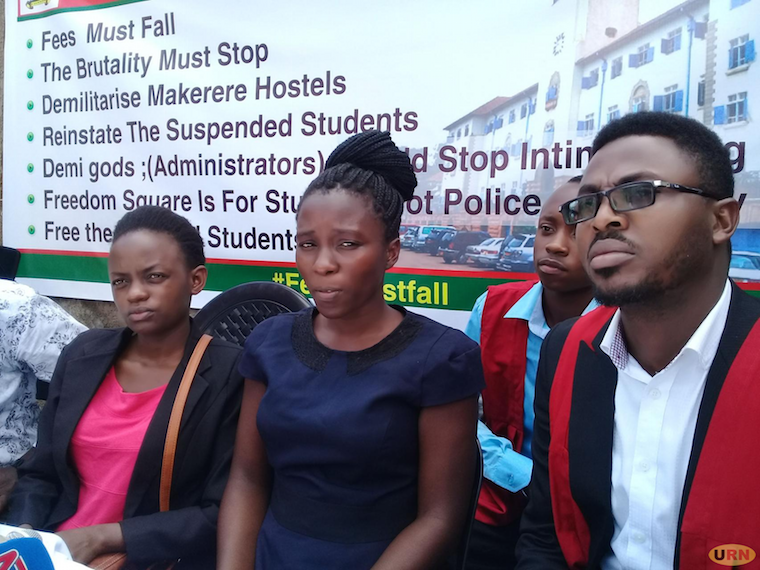 The students strike at Makerere University that started on October 22 is not yet over, student leaders have warned.
Makerere university vice guild president, Judith Nalukwago told journalists at Centigrade restaurant in Nakulabye on Saturday that they cannot call off the strike until management addresses their concerns.

Nalukwago, who is the acting guild president, fired the guild prime minister, Emmanuel Obbo early this week for issuing a communication indicating that they had called off the strike.

Nalukwago says they are planning to hold a general assembly at the Freedom Square in Makerere on Monday to forge a way forward. There have been unconfirmed reports that government and the university management have 'bought' off some student leaders to call off the strike.

On October 31, vice chancellor Prof Barnabas Nawangwe issued a statement asking students to immediately return to class, saying normalcy was gradually returning to the university albeit with some hiccups. He said the semester would continue as planned and reminded students that examinations will commence on November 18 as scheduled.

Nalukwago says they will not be forced to return to class, adding that they will continue demanding for a hearing. Students want the university to recall the 15% tuition increment, reinstate all suspended students and withdraw security from Freedom Square, a converging area for students.

Nalukwago also told journalists that Prof Eria Hisali, the principal of college of Business and Management Science together with Gordon Murangira, the personal secretary to Nawangwe should be investigated and perhaps suspended for their role in brutalizing students.

She accuses the two especially Hisali of sanctioning security to mishandle students. Apart from brutally arresting students, the military police officers entered Mitchelle and Lumumba halls on October 24. They beat up students and destroyed property.

The operation is said to have been led by Captain Ronald Lubaare, who was arrested on Friday for his role in the saga. Nalukwago says that while the arrest of Lubeera is a good step, the real master minders of the brutality have not been dealt with.

"Then acting VC told my minister that they were going to switch off the lights of the university, they are going to switch off all cameras and he was going to invite the military to batter the students and destroy their property. That was on Tuesday, and exactly what he said happened on Wednesday. I think even staff can testify that on Wednesday all lights were off at the university and that is the night students were battered. As the student's body, we’re not satisfied that a one captain can be arrested and they don’t arrest Prof Hisali and they don’t even investigate him." added Nalukwago.

The students have also threatened to sue the university for violating their freedom of assembly and association, freedom of speech, failure to protect its own students against security forces and destruction of property. Joshua Katabazi, a law student, says the University needs to answer about their actions and compensate the affected students.

"Students' property that was destroyed must be replaced. We want to sue the university for suppression of dissent and all our freedoms of assembly and association. As you’re well aware, the famous Freedom Square in Makerere University cannot be accessed by students right now. It is occupied by the police and the military. Which really is against freedom of association and assembly. We can’t gather anywhere on the Freedom Square and deliberate as students. This kind of environment is not conducive." said Katabazi.

The impasse at Makerere started on October 22nd, 2019 with students protesting the 15% cumulative tuition increment policy adopted by the University in 2018. Under the policy, tuition at Makerere is to be increased by 15% every academic year for the next five years.

While the university says students were involved in the process, the students say the process was marred with irregularities including, denying them the opportunity to share findings of benchmarking research with the general student population.
Students say the last guild leadership was hijacked and bribed into passing the policy. The strike has paralyzed business at Makerere University. Dozens of students have been arrested, later freed while others have been beaten, suspended and some issued warning letters. This week on Thursday, parliament tasked the parliamentary committee on education to investigate the impasse at Makerere.

Students say they are ready to cooperate with the committee and will provide all necessary information to help during the investigation.

-1 #1 Akot 2019-11-03 19:17
While students insistance in strike is understandable, they should know that nothing will come out positively for them as Museveni controls every institution, owns tax money!

Ugandans MUST bring down the tribalistic system, UNITE & show Museveni way out, then Reform the Republic or form Independent Tribal States, if they want a future!

Until UNITY empowers Ugandans, it's Museveni who decides as the country formed by our tribal lands is tribalistically divided & ruled, thus belongs to him, & Ugandans are at his mercy!

Unless Museveni is thrown out in UNITY, there is no way few students, small groups, tribe, region, will get what they want!

Ugandans ensure Museveni's place through the divisive tribalistic system that disempowers them but empowers the dictator/chief tribal leader!

It's Ugandans ensuring migrant Musevnei is unopposed, thus cannot be replaced by any Ugandan!
Report to administrator
-1 #2 odyongo 2019-11-04 03:56
Students, it is time you come to your senses. This business of un-endless strikes will not help. How then are you preparing for the forthcoming exams.

Your parents have lots of expectations from you. You need to negotiate smartly with your administrators. Otherwise they will suck all of you.

By the way we also studied from the same University and experienced similar problems but were cool headed and finished. The economy is changing, people have to pay whether they like it or not.
Report to administrator
+1 #3 Zaitun 2019-11-04 10:31
Odyongo 2019-11-04 03:56
"Students, it is time you come to your senses. This business of un-endless strikes will not help. How then are you preparing for the forthcoming exams."

I think you have got the point wrong. It is because of people like you who are self-centered that Uganda continues sliding to the abyss.

Instead of coming out and support these students who are expressing a National Cuase, you come around blaming them.

What sort of a man are you- a man fighting for freedom for his kids and Ugandans at large, or one that goes around with conspiracy theories against the people?

If we Ugandans were serious, what these students have started would end up in a National Cause forcing this unruly king and his nobles to quite the political sphere.

But unfortunately, we have alot more Odyonyos out there taking pleasure in assuring that Ugandans continue suffering as they amass wealth unproductively.
Report to administrator