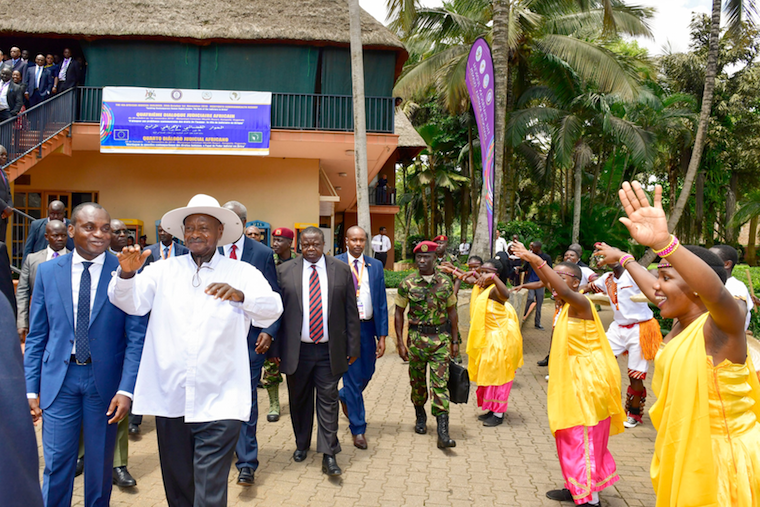 The three-day fourth African Judicial dialogue on the roles of the judiciary in tackling contemporary human rights issues in Africa opened at the Commonwealth Resort Munyonyo.

Museveni said that nature is oppressing mankind in terms of floods, droughts, earthquakes and diseases. According to Museveni, these issues should be at the heart of man’s priorities as opposed to human rights violations manifested through colonialism, dictatorship, slave trade and other forms of violations.

Museveni argued that human rights violations should be addressed under proper contexts which consider the fact that Africa missed the opportunity for growth in three past industrial revolutions.

"When you talk of rights, you must put whatever you’re talking about in the context of where we stand in that long journey of man battling with nature. The second problem of man is the oppression of man by man. All problems caused to man by other men - feudalism, the slave trade, colonialism, dictatorships, fascism, violation of rights which is the small subject you’re talking about here but it is within the bigger struggle." said Museveni.

He said the primary goal of African judiciaries should be in facilitating economic growth for job creation, integration, infrastructure and promotion and the protection of civic and economic rights to food, education, jobs and health.

"There is no way Africa is going to develop if we don’t solve the problem of integration because of modern economies ever since the industrial revolution. Industrial revolution meant mass production of goods and services. So the whole society including the judiciary must be aware that our prosperity is now based on the production of goods and services on a big scale and of good quality and that is how we shall ensure prosperity. That is how we can create jobs, that is how we can get revenue to build infrastructure, to pay salaries. This is the only way to do it, the countries that do it became prosperous. Those which don’t stagnate." he added.

In any case, Museveni said the legal system in Africa is merely transplanted from the West and therefore needs to be harmonised and aligned so as not to clash with traditions and culture.

"Some cultures have ignored existing laws, which shows that those who designed the laws never did enough consultation to put people’s cultures and norms into consideration because not all African practices are bad." he said.

Throughout Museveni's 48-minute speech, delegates listened attentively as the same message got translated into French and Portuguese with occasional clapping and cheering. He emphasized that some human rights issues should be treated as an opportunity cost for development to prevent impunity from thriving on the continent.

Ambassador Thomas Kwesi Quartey, the deputy chairperson of the African Union Commission said that as African judiciaries implement Agenda 2063 for creating the Africa we want, there is strong need to recognize the challenges faced by the continent.

“This requires us to focus our eyes on how best to advance rights that address underdevelopment, poverty, inequality, marginalization and exclusion in our continent as we make concerted efforts towards effective implementation of agenda 2063,” he stated.

Justice Sylvain Ore, the president of the African Court on Human and People’s Rights applauded the Ugandan parliament for leading the way in the promotion and protection of human rights through various legal instruments including the Prohibition of Female Genital Mutilations Act, Anti Money Laundering Act, Domestic Violence Act and the Equal Opportunities Commission Act among others.

Ore said the judicial dialogue is the most important judicial round table on the continent for sharing jurisprudence, experiences and interests in the common cause for human rights and democracy. Uganda’s chief justice Bart Katureebe said that the government is committed to building the judiciary into a beacon of justice and democracy for the protection and promotion of Human rights.

The dialogue is a biennial platform for African judiciaries to interact with each other, share experiences and discuss pressing contemporary issues affecting human rights on the continent.

This time, they are discussing the roles of the judiciary in Africa in tackling contemporary human rights issues such as migration, internal displacement and refugees, terrorism and protection of human rights, the right to nationality, statelessness in Africa, election petitions and human rights as well as development and the rights of indigenous people.

The three-day high-level summit brings together presidents of Supreme courts in Africa, chief justices, principal judges and Constitutional and Supreme court judges as well as members of parliaments, government ministers and the diplomatic corps from the European and American courts for human rights.

At the end of the meeting, an action plan for addressing some of the above issues will be adopted for implementation in the 33 member states that have ratified the protocol which established the African Court on Human and People’s Rights.

While the West is pointing fingers at Africa and fueling discent by promoting opposition groups and parties and financing NGO a to pin down respective governments, in the other hand is withdrawing economic cooperation and fueling unrest to neocolise Africa again and creating economic crisis and descent in those countries.

Those who are attacking Musevenu and his speech and remarks are simple tools of neocons. Look at Lybia.Gadafi was dictator.

They used force to destroy his extremely rich country and kill him so that now they are plundering Ktbia resources and making Lybians fight one another.

They stole billions of Libya dollars and also in Iraq.Human rights? Have aggressors brought to human rights courts? Never! And they are talking about human rights in Africa.?? Hahahaha
Report to administrator
+2 #12 Kikomeko 2019-11-01 18:28
What More does the world want to hear?? That is GOD Almighty Leader of NRA..a rouge Force that is meant to Kill, Rape, Maim and Mishandle Ugandans at EASE..NO CASE TO ANSWER..A Story as a reminder..in one Country called Rumania lived a Character called Nikolai Caucescu and his Wife Elena..

He commanded a Force of rouges called Securitate and used to send his Gulfstream to Uganda to bring him Fresh Fruits like Pineapple and Mapapali..The Rumanians were at that time running Hungry with all Stores empty of any Produce..One Day they said to him Enough is Enough while He was trying to soothe them with Sweet Talks from his Balkony..He ended Up on the Wall with a Bullet in his Skull...Bosco knows well that no Folks on this Universe can sit back and let itssel
f be Brutalised..just Count your Days..
Report to administrator
+2 #13 Kirya 2019-11-01 21:11
NRM is a terrorist outfit. m7 the dictator talks crap and has corrupt supporters.
Report to administrator
0 #14 Jama 2019-11-02 15:29
That speech is in contradiction with the reality on the ground.
Report to administrator
0 #15 Akot 2019-11-02 20:23
Ugandans MUST bring down the tribalistic system & UNITE or the outside world will watch in silence, because it's only Ugandans who have the right to chose who rules/leads them!

By maintaining the tribalistic system, Ugandans are telling the outside world they are alright with Museveni & the system so, need no help from any outsider!

But once the tribalistic system is brought down, Ugandans won't be alone & Museveni won't vomit on any one any more!

Put yourself in Museveni's place, he controls every institution, owns tax money, has been in power since 1986, is the only winner at fake elections...!

M. Gadhafi behaved the same way, but once the tribally divided & ruled people keeping him in power UNITED, he had no where to run but in a rat hole!

Africans helped their useless rulers to bolster themselves in power without making demands for public/social serviced & bulding democracies step by stem!

See, Algerians, Sudanese are UNITED now, but don't have that just ONE leadership to help conclude, yet they have so many opposition leaders & one wonders who they are opposing!

It will take real need for change for Africans to work hand in hand & learn progressively!

Ugandans must give themselves chance to a start & this will begin the moment the tribalistic system is brought down & UNITY of ALL that will show Museveni way OUT & give a beginning!

People need leadership for public/social services, but which tribal leaders can manage this in free tribal states?
Report to administrator
12