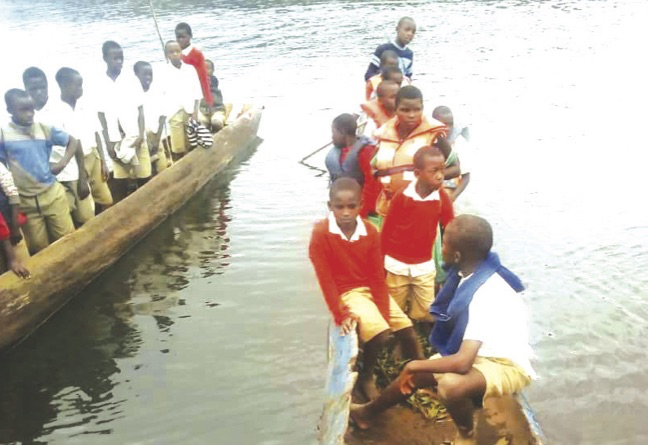 Pupils use canoes on Lake Bunyonyi going to school

Lake Bunyonyi has turned into a cemetery for pupils in south-western Uganda between Kisoro and Kabale who row dug-up canoes (boat) to and from school. Faced with deadly waves, the small canoes usually capsize, drowning their tiny occupants.

One victim was seven-year-old Joab Natukunda, a pupil of Bwama primary school in Kabale district, who routinely rowed his parents’ canoe (boat) to and from school on Lake Bunyonyi.

Natukunda had become an expert rower at such a tender age because every child in the Lake Bunyonyi area rows a boat, just like urban children walk, ride bicycles or are driven to school.

Yet, on one fateful day last July, Natukunda, a P1 pupil, who used to make that perilous one-and-half-kilometer journey across Lake Bunyonyi to school and back, ran into some rough waters.

The boat capsized. The young soul drowned in what turned out to be a very devastating episode for both the deceased’s family and the fraternity of Bwama primary school. Natukunda’s body emerged from the depth of the lake four days later.

Natukunda’s story is just one of many terrifying tales of deaths by drowning on Lake Bunyonyi. Many other children remain in harm’s-way, because they continue to make that journey on Lake Bunyonyi using canoes.

To right the risky situation on Lake Bunyonyo, Uganda Revenue Authority (URA), mobilized over 40 local and international taxpayers, to fundraise Shs 150 million recently. This money will buy two engine boats to transport children to and from school.

In addition, these boats will each have at least 50 life jackets enough for all occupants every time the boat sets sail. Ian Rumanyika, the acting URA spokesperson, urged partners to join in and protect lives. According to Robert Kanyoma, the head teacher of Bwama primary school, almost all the school’s 300 pupils travel on the lake.

With the URA boats, Kanyoma said, the movement of pupils will be much safer and efficient. “You see, because of the heavy rains of late, children find it hard to cross on their canoes; so, they miss school.”

Kanyoma said Ensuti Resort proprietors have been kind enough to provide their better conditioned, safe and covered boat during the rainy season to transport at least 40 children per trip.

But he said, 300 pupils are too many to commute on one boat and the back and forth movement takes a lot of time. If all pupils use the Ensuti Resort boat, classes begin past 9am, which is late. Essentially, teachers are not able to cover as much as they should. Vincent Seruma, URA assistant commissioner, Public and Corporate

Affairs, said the boats will be delivered before the end of this year. He announced this after the ceremonial football match between URA and some of its partners; Ruparellia Group, Stanbic Bank, Total, Spedag and Uganda National Roads Authority.