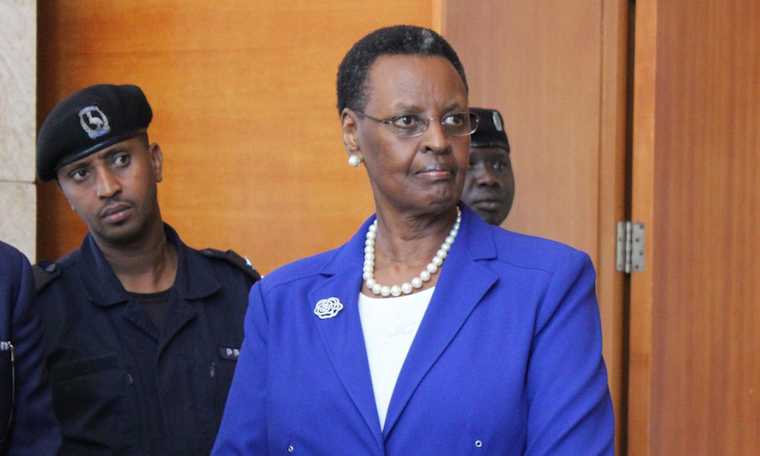 The First Lady and minister of Education and Sports Janet Kataha Museveni has accused striking Makerere University students of being corrupt and allowing to be paid and used by opposition politicians to oppose government.

The same accusation has been peddled by both police and Makerere University management since the student strikes broke out on Tuesday last week over tuition increment.

Security responded with highhandedness, arresting several students and also raiding student halls of residence on both Wednesday and Thursday nights. The brutality of the security forces has drawn nationwide condemnation from clergy, MPs, the American Embassy among others. Yesterday night, security once again raided Mitchell and Lumumba halls and violently arrested several male students. Gunshots and stun grenades blasts could be heard from the university till the wee hours of today morning.

Now Ms Museveni says students are using the fees increment as an excuse to stage strikes so as to portray the government in bad light to the rest of the world because the 15 per cent tuition increment policy over the next five years was agreed upon by students last year. According to Ms Museveni, opposition politicians who are getting funds from "unknown sources" are also paying foreign journalists to come and report falsehoods about Uganda.

Ms Museveni also condemned the public, who, according to her are so quick to judge security forces for their alleged brutality, saying at all times, everyone is expected to submit to authority  if they are to survive "punishment."

Below is her full statement

To the Ugandan Children who Call me Maama by Choice – Issue No. 3

Today, I would like to discuss the topic of corruption with you. The Oxford English Dictionary defines corruption as the dishonest or illegal behavior especially of people in authority.

This word is used a lot these days. It is possible that many people, especially young people, often wonder but never try to understand what corruption really means. In the last two days or so, we have had some students from Makerere University demonstrating over an increase in tuition fees agreed upon in 2018 which was to start with first year students of the academic year 2018/2019.

Recently, I got concerned and tried to find out whether there are good and genuine reasons that may have caused this unrest. First of all, I thought it reasonable to compare Makerere University fees structure with those of other Universities. The University whose fees structure I got readily and quickly was that of Uganda Christian University – Mukono - whose comparison is as follows for a select number of courses (the fees shown are per Semester; not Academic Year): 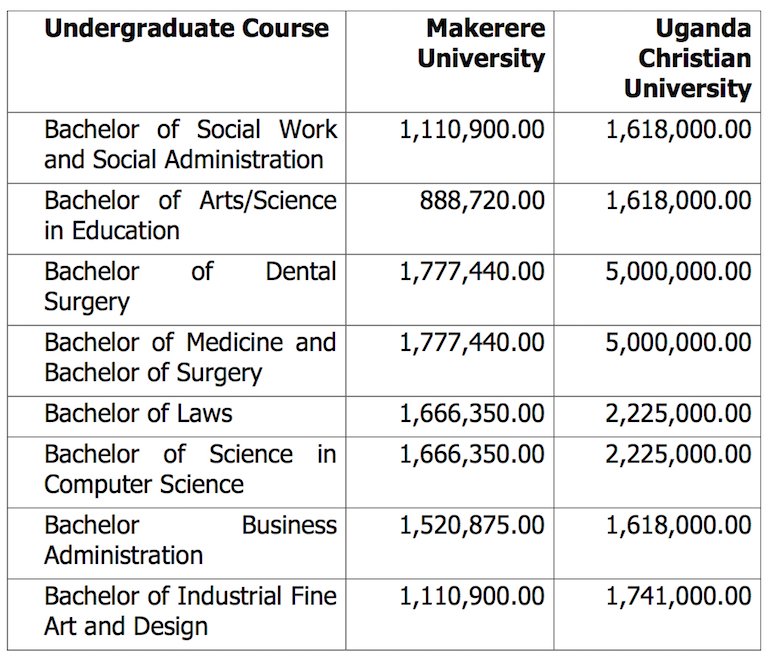 That aside, however, you may ask, “What has all this to do with corruption?” Corruption has so much to do with what is happening at our Universities - not just Makerere University but several others.

First of all, it is important to understand that Makerere University Management took the trouble to ensure that students were fully involved and consulted in the process of establishing an acceptable tuition fee structure for the Institution, through a series of consultations with the student leadership, and the outcomes were agreed upon by both parties, as well as benchmarking with other similar universities.

How then do students turn around, afterwards, and accuse the University management of imposing “high costs” on the students? Surely, the logical and right thing to do would have been to ask for further consultations so as to revisit the issue and find a new way forward.

That not withstanding, I have learned with dismay that some of the people involved in this “demonstration” are not students from Makerere University or any other university for that matter. They are people who have made it their way of life to be paid to join any riot wherever it is happening.

Apparently, the political opposition in this country - who are well funded “somehow” by some “unknown sources” – find it useful to pay unemployed young people to riot wherever and whenever they believe they see a viable opportunity.

What is most disheartening is that some of the students at the forefront of these dubious demonstrations at Makerere University are the “privileged ones”.

For example, many of these students are sponsored by Government, Master Card Foundation, State House while others are beneficiaries of the Higher Education Students Loan Scheme. One young student lied about his “vulnerable family” to get on the State House Scholarship program only for us to learn later that he has an able-bodied mother with a well-paying Government job!

That makes one wonder: What is behind these student demonstrations? For these vulnerable young people and the adults who pay them it seems as if nothing else matters – not these young people whose minds are distorted early in life; not the fact that the resources used to replace destroyed University property could have solved another problem somewhere; not the consideration that this is very wrong instruction to students of how problems are solved in life without confrontation and destruction of life and property.

Nothing constructive or educational at all is achieved. Instead, the public is misled through their skewed propaganda as to what is really happening. Unfortunately for those who stir trouble and mislead young minds, there is one who sees what is in people’s hearts and he is the one who is the ultimate Judge; that Judge holds all of us to account; soon or later.

We may not see that judgment quickly but in due time it does catch up with each one of us. Therefore, I address this article to all our young people, but especially to those at Makerere University and other institutions of learning, to advise them to desist from being used by unscrupulous people who do not care about what happens to them now or in the future, and who will abandon them as soon as they have achieved their mischievous purposes.

This then is the corruption we talk about so much without understanding what it is or where it is found. When you hear of corruption, start by examining yourself: Is it possible that you are corrupt too? Are you paying young people to do what is not lawful for them to do? Are you paying people to go and masquerade as University students demonstrating?

Are you paying foreign journalists to come here and tell lies about things they know nothing about, just so you can convince the world that your story is the true one? Are you using the University fees scenario as a façade to cover up something else?

Next time you are tempted to point a finger at corrupt people, if you are guilty of any of the above, know that you too are corrupt; begin with yourself. The Bible has many stories that tell you what the ultimate Judge sometimes does with corrupt people.

For example in the old biblical days, a man called Naaman, Army Commander of the Syrian Army, was suffering from leprosy. Naaman got to know that in Israel there was a man called Elisha who was a true Prophet of the Living God who could heal his disease (you may look it up in 2 Kings Chapter 5:1-27).

Naaman packed money and precious gifts and went to see Prophet Elisha in Israel. The Prophet and a servant called Gehazi who met Naaman. After Naaman had been cured of his disease, he offered Prophet Elisha the gifts he had brought him but the Prophet refused the gifts.

A while later, after Naaman and the Prophet had parted, Gehazi ran and caught up with Naaman and claimed that the prophet had sent him to pick the gifts. Thereafter, Gehazi appropriated the gifts for himself. But the Judge in Heaven revealed this trickery to Prophet Elisha.

As a result of that “corruption”, Gehazi was struck with the leprosy that had been on Naaman and he ceased to be servant to the Prophet of God. The lesson of this story is that there is a price to pay for every act of corruption that we carry out, whether or not people are looking at us – there is a Higher Judge.

As I conclude, I thought I would say something about the way the public tend to quickly judge the police interventions in cases like this; and I am in no way condoning brutal treatment wherever it may occur. Let me share with you what the Bible says about Government’s role in peace keeping through enforcement of law and order, in the book of Romans 13:1-5

“Let everyone be subject to the governing authorities, for there is no authority except that which God has established. The authorities that exist have been established by God. Consequently, whoever rebels against the authority is rebelling against what God has instituted, and those who do so will bring judgment on themselves. For rulers hold no terror for those who do right, but for those who do wrong. Do you want to be free from fear of the one in authority?

Then do what is right and you will be commended. For the one in authority is God’s servant for your good. But if you do wrong, be afraid, for rulers do not bear the sword for no reason. They are God’s servants, agents of wrath to bring punishment on the wrongdoer. Therefore, it is necessary to submit to the authorities, not only because of possible punishment but also as a matter of conscience.”

Look here Wainanchi ; we Ugandans are basically polite people who avoid getting into other people`s private stuff . We know a lot about the people in State House but say very littlte.

Ironically, she found the definition of corruption in the Dictionary. It discribes her and her husband

Thanks Wooden for your Shs.77 currency note. It warmed up my cold morning.

We are told that; by the time a Judge makes his/her judgement/pronouncement, s/he is also on trial.

In other words, full of herself and quick to judge, our peasant dictator's wife lacks the aristocratic consciousness.
Report to administrator
+1 #42 Wooden K. 2019-10-31 13:03
Not only that Lakwena ; this wife has never been on any campus as a student , she therefore does not understand how a student`s mind works.

You would Think she would talk to her husband and ask him what he used to do when he was a student. Who paid him to behave the way he behaved ?

I don`t know what God is upto these days. The Devil, it seems , has out-smarted HIM.

Alll these wicked people are now freely using His name .

Not only that Lakwena ; this wife has never been on any campus as a student , she therefore does not understand how a student`s mind works.

You would Think she would talk to her husband and ask him what he used to do when he was a student. Who paid him to behave the way he behaved ?

I don`t know what God is upto these days. The Devil, it seems , has out-smarted HIM.

Alll these wicked people are now freely using His name .

Indeed Wooden, the guy used to cut classes/Term at Dar University, in order to go to Mozambique to practice and "Master violence" on Colonial Portuguese, by decapitation (beheading) or scalping (skinning the heads) of those captured by the Renamo Rebels.

In other words, that was Janet Kataha's bloody sweet heart, now husband and father of her children.
Report to administrator
12345