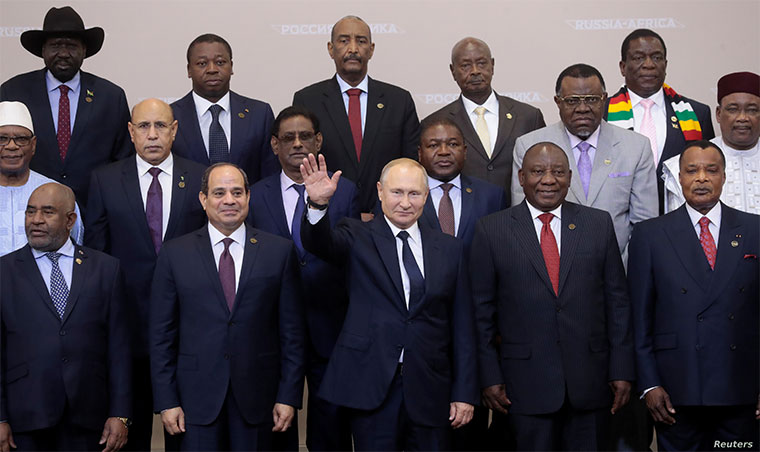 Russia's President Vladimir Putin waves during a photo with heads of countries taking part in the 2019 Russia-Africa Summit at the Sirius Park of Science and Art in Sochi, Russia, Oct. 24, 2019

Rwanda is the latest African country to sign a nuclear deal with Russian state atomic company Rosatom.  But the deals between Russia and several African countries are raising concerns from environmentalists who say nuclear energy is not always clean and does not come free.

A Russia-Africa summit in Sochi, Russia, last week brought together the heads of state and government representatives from 55 countries. Speaking at the forum, Russian President Vladimir Putin said his government was offering African countries an opportunity to use nuclear technology.

"Rosatom is prepared to help our African partners in creating a nuclear industry,” with “the construction of research centers based on multifunctional reactors," he said.

Rosatom is building a $29 billion nuclear plant for Egypt. The same company is helping Uganda, the Republic of Congo and Rwanda establish nuclear facilities. Right now, South Africa is the only country on the continent with a nuclear power plant.

In Rwanda, Rosatom will construct the Center of Nuclear Science and Technologies.  In Nigeria, a planned Rosatom nuclear reactor may provide the West African nation with electricity.

Environmental activists are wary of these deals. Jakpor Philip of Nigeria's Environment Rights Action said, “We continue to hear, for instance, that nuclear energy is clean, but in truth, it is not clean because you need a lot of water to keep the nuclear plant cool. You need an independent power to keep powering 24/7. If you need that much power to keep that plant running, then it shows it's not clean."

Most African countries have needs that could be met by nuclear energy. According to the International Energy Agency, 57 per cent of Africa's population does not have easy access to electricity, and those who have it must deal with frequent power outages.

Michael Gatari, the head of nuclear science and technology at the University of Nairobi, said African countries can pursue nuclear technology but must get their own people to manage the nuclear reactors.

"We should have in-country, competent, well-trained manpower not depending on expatriates’ support, because that would be very expensive in long run,” he said. “Manpower development for nuclear energy is very critical."

Gatari also said Russia was seeking business in Africa, not giving away gifts.

"Africa is not going to get a free reactor,” he said. “They are selling their technology. So the issue of helping does not come in.  Of course, there is a component of 'we will train your people, we'll do this,' but still if you calculate the cost, it's we who cough. So the African countries should move into it with a business vision."

And in Sochi where Putin rolled out the red carpet for African leaders, he reminded them Russia was open for business.

We already have excessive power from expensive dams from heavy loans and no returns on investment for the same along with aged power distribution network system that the Ugandan gov't should be upgrading instead of adding more debt and damaging investments to our economy
Report to administrator
0 #2 rubangakene 2019-10-28 19:29
"Rwot ineka woko do!" meaning; "Chief don't let me die with laughter!", essentially these leaders just accept what Russia tells them to do.

Why don't they learn to walk before they start running? How many latrines have they built in their backyard?

Instead of focusing on simple, appropriate technology, they jump to something they haven't a clue about. Moreover they have not addressed the simple issues of solar power, wind power and hydro-electric to its maximum capacity.

Lest we forget the tragedy that happened in the USSR nuclear disaster a few years back, we will be wiped off this earth. we will also need a more sophisticated defence system for these gizmos in lieu of food in our stomachs!
Report to administrator
+1 #3 Lysol 2019-10-28 21:51
One word; CHERNOBYL.. Can those countries handel the nuclear disasters of Chernobyl or even Japan 's Fukushima?

Russia is just playing catch up in Africa (with the dictators) after the fall of the Soviet Union. It will also fail. Nothing coming out of Russia is of good quality.
Report to administrator
0 #4 Amooti Mugi 2019-10-28 22:36
Well, Russia has the technology but I have reservations about too much faith in Russia!!!

Remember the Chernobyl nuclear power plant explosion in Karzakstan,(USSR)???
UP to date over 30 years down, that area is uninhabited....

Would an African country handle in the event of leakages or an accident without endangering the neighbourhood with radiation??
Where would they store the radioactive wastes????
Report to administrator
+1 #5 kabayekka 2019-10-29 01:18
Dodgy Eastern Super Power. Why did this nuclear power country not allow the countries very much adjacent to its immense territories to obtain this technology first?

These African countries bed ridden with power thirsty dictators are only trying to revive the Berlin Wall and the Cold War so that they can be helped to rule the World until the end of their lives.
Report to administrator
0 #6 Lakwena 2019-10-29 08:36
Given the Shauriyako continent that we are in, our egocentric leaders have no clue how shauriyako Russian technology (nuclear) is.

In other words, if it comes to pass, prepare for nuclear meltdown (accidents) like the Chernobyl disaster, which happened on 26 April 1986.

However, by boldly trying to identifying with Communist China and Russia, our dictators whose relation with the West is getting cold; are simply trying to black mail e,g, America.

Mooching around with Chinese and Russians will only hurt their citizens in the long run. In a nutshell and for heavens sake, With Boda boda mentality, Africans still don't have the capacity, culture and discipline to harness nuclear facilities.

In other words, many people will get hurt.
Report to administrator
0 #7 kabayekka 2019-10-30 02:00
Many of these African countries have so much cheaper solar and wind energy to contend with.

One understands that the Republic of Congo has so much hydro electricity energy(sustainable and cheaper) if it is consolidated, to supply much of these African countries for many years to come.

And in these tropical climate countries, they can grow food all year round unlike Russia in the temperate climate where food is not grown for part of the year.
Report to administrator
0 #8 Uganda at heart 2019-10-30 10:35
Uganda is left to be swallowed up by an endless desires of only one man, he call himself God chosen but he is only greedy and blind.

Why would he desire to take us back in the days of suffering because of his ego and selfishness.
Report to administrator