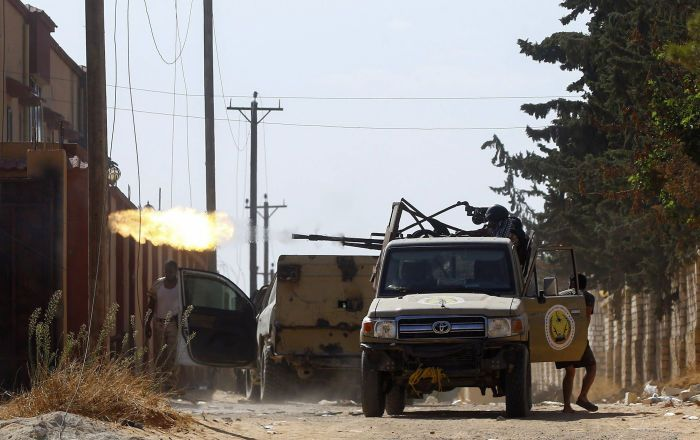 The Presidency Council of the Government of National Accord (GNA) has announced its commitment to efforts geared towards a peaceful resolution of the Libyan crisis.

In a statement, the GNA which is the UN recognized government based in Tripoli affirmed its commitment to efforts being undertaken by various countries to find a peaceful resolution of the eight-year-long conflict.

“It is imperative that the Libyan Political Agreement and the bodies emanating from its implementation be adhered to as a basic frame of reference for any form of dialogue or agreement, in accordance with the relevant Security Council resolution, with immediate cessation of any dealings with the parallel institutions to the Government of National Accord (GNA),” partly reads a statement released by the Presidency Council of the Government of National Accord.

Germany has offered to host the two sides in the Libyan conflict in Berlin in April 2020 under the auspices of the United Nations (UN) with the hope of stabilizing the north African country that plunged into war following the overthrow of Col Muammar Gaddafi in 2011.

The planned Berlin Conference will be the first major attempt by world powers since the collapse of the earlier attempt in April when forces loyal to the warlord, Khalifa Haftar launched an offensive on the capital, Tripoli.

The Presidency Council follows up the efforts being exerted by several countries in pursuit of reaching a political settlement and a peaceful solution to the Libyan crisis.

In the context, the council commends the role played by the Federal Republic of Germany at the present juncture with the purpose of holding an international conference which gathers all the parties concerned with the Libyan file.

The council, however, wishes to emphasize the following points as constant guideline for its policies. It is imperative that the Libyan Political Agreement and the bodies emanating from its implementation be adhered to as a basic frame of reference for any form of dialogue or agreement, in accordance with the relevant Security Council resolution, with immediate cessation of any dealings with the parallel institutions to the Government of National Accord (GNA).

Any talk about a ceasefire must be associated with the withdrawal of the attacking forces to where they come from, without any preconditions.

The council renews its emphasis that there was no agreement made Abu Dhabi, as being circulated. The said meeting was simply consultative in nature, held under the auspices of the United Nations.

The only Agreement was reached was the one in Paris, stipulating that elections would be held on specific dates. The Palermo Agreement lent further support to what was agreed upon in Paris. The other party, however, never committed to those agreements.

A political solution can only be reached through the United Nations Plan which calls for the convening for inclusive National Conference, as was planned in the city of Ghadames, on the 14th of last April.

That endeavour was undermined by the aggression on Tripoli, and the attempted coup on the legitimate government. In fact, this course action is commensurate with the initiative proposed by the President of the Presidency Council, in which he advocated for the conveying of a General National Conference, through which agreement can be reached on a constitutional basis providing the foundation for holding concomitant presidential and parliamentary elections.

There can be no talk about the establishment of National Security Council outside the framework of the Political Agreement, and before putting an end to all parallel bodies, as well as accepting that the Military Establishment be placed under the civilian authority of the Presidency Council of GNA.

Emphasis on the fact that the National Oil Corporation (NOC), located in Tripoli is the only legitimate institution under the direct supervision of GNA as indicated in the relevant resolution of the Security Council.

It’s an absolute necessity that all states concerned with the Libyan situation be enabled to participate in internal conferences and meetings searching for a political solution the Libyan crisis, without exclusion, as being witnessed in the preparatory meeting in the forthcoming Berlin Conference.

In conclusion, the Presidency Council emphasises its intent to vanquish the war criminal and its militias. Furthermore, it will not accept any form of dialogue except with those who believe in the establishment of a civilian, democratic state, peaceful transaction of authority, whose hands have not been tarnished by the Libyan blood, and have not committed crimes of war, or violations of against humanity.

The Presidency Council of the Government of National Accord

Now there are many players trying to do the same in the name of investments in order to exploit the rich resources of Africa.

Russia (playing catch up) has now joint in after China, Japan and of course the USA and UK before all of them. Another form of neo-colonialism to benefit African dictators with no accountability.
Report to administrator
0 #2 kabayekka 2019-10-23 00:19
Lysol you have a good point.

So now what should the people of the African continent do to stop a Third World War that is putting this continent to what it is now.

A very suffering continent for no proper reason at all. Technology on this planet is everywhere trying to solve the problems of humanity and Africa is no exception.