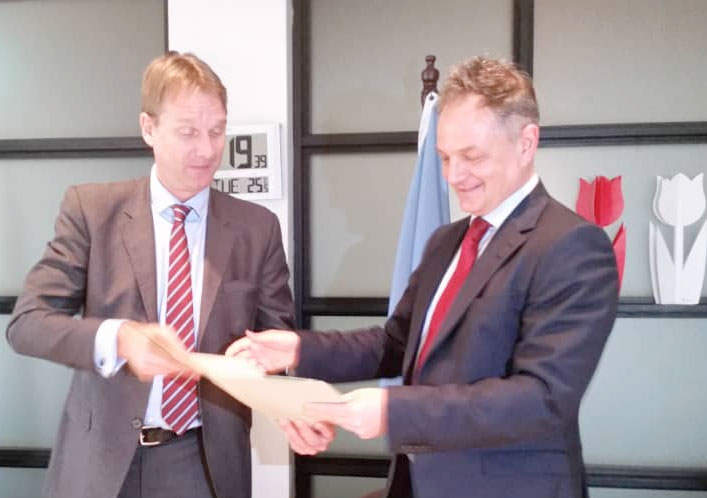 The United Nations Population Fund (UNFPA) has entered into a partnership with the Kingdom of the Netherlands to support a four-year programme to advance sexual and reproductive health and rights program in West Nile and Acholi sub-regions.

UNFPA country representative Alain Sibenaler signed the partnership worth €24 million (Shs 96 billion) with the Netherlands ambassador to Uganda Henk Jan Bakker during a short event held at the Embassy of the Netherlands in Kampala.

The funding will go to supporting interventions to address high maternal mortality, high unmet need for family planning services, teenage pregnancy and child marriages, Gender-Based violence (GBV) as well as inequalities in access to sexual and reproductive health services for vulnerable groups such as adolescents, refugees and persons with disabilities.

It will be implemented in the districts of Zombo, Nebbi, Maracha, Pakwach, Amuru, Agago, Arua, Yumbe, Koboko, Adjumani, Moyo and Lamwo.

“Through this programme the Dutch government seeks to further contribute to the government Uganda’s efforts to decrease maternal mortality, address the unmet need for family planning, reduce gender-based violence and promote gender equality, reduce teenage pregnancies and early marriages. And ultimately contribute to your country’s opportunity to harness the demographic evident”, said Bakker.

Bakker, said sexual and Reproductive Health and Rights is one the pillars of Dutch development cooperation and expressed optimism that the lessons from the program will be used to inform policy decisions at the government level.

Uganda performs poorly against key sexual reproductive health and rights indicators. According to the 2016 Uganda Demographic and Health Survey, teenage pregnancy has stagnated at 25 per cent for the last decade, contributing to 26 per cent of maternal deaths.

“Such poor indicators jeopardize Uganda’s opportunity to harness the Demographic dividend and to achieve its vision of becoming an upper middle-income country by 2040,” said Sibenaler.

The stagnation, according to Sibenaler, is due to women’s lack of access to family planning services, lack of community ownership because of cultural and religious beliefs as well as leaders at the different levels failing to do their part.

To implement the program, UNFPA intends to work with its strategic government partners such as ministry of Health, ministry of Education and Sports, ministry of Gender, Labour and Social Development, National Population Council, as well as district local governments and civil society organisation.

“Delivering an integrated package of services and rights to ensure zero unmet need for family planning, zero maternal deaths and zero tolerance of GBV and harmful practices is the core of our work, operationalizing UNFPA’s mandate to carry out the ICPD programme of Action, as means to achieving the Sustainable Development Goals,” Sibenaler said.

Am sure there is something they are pushing or if not some pharmaceutical industry wants to test it medicines on these Teenagers in west nile and Acholi subregion.

Lets not forget that they introduced nodding disease in northern Uganda and have since sent their students to come and carry out training and research on the patients
Report to administrator
0 #2 Japman 2019-10-21 15:12
Quoting WADADA roger:

Thank you very much but deep inside me, i know that these guys have never had any love for us to the extent of giving us all this money for no ill motive.

Am sure there is something they are pushing or if not some pharmaceutical industry wants to test it medicines on these Teenagers in west nile and Acholi subregion.

NOTHING is free. There's always a reason why.
Report to administrator
0 #3 rubangakene 2019-10-21 21:34
It is funny all this money coming from a country where sex begins at eleven years of age, drugs are liberally available and PROSTITUTION IS LEGAL!

As for nodding disease, you are also right on the nose; you see, they brought in a 'special mosquito type' bred in their laboratory to eat all our mosquitos in order to eradicate malaria.

Now when these mosquitoes finished feasting, they did not die as "predicted" during laboratory tests. Instead they turned on humans and there was no control mechanisms. You can't fool us again!!
Report to administrator
0 #4 Mubiru 2019-10-22 14:31
Donors are the stupedist wise people on earth when they pour their taxpayers' money into a country where all their so called donations are eaten by thieves and mafia.

I suspect their own nationals who handle the distributions must share in the loot misnamed donations. Why don't they donate to UK the leading country in Europe in child pregnancy where girls of only 12 years even younger are producing children like pigs?
Report to administrator