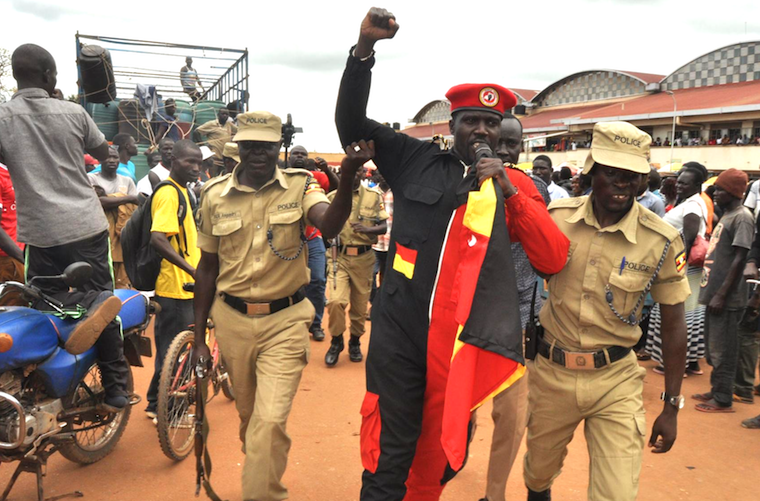 William Komakech, the Kitgum resident district commissioner who heads the security says that the decision was made to ensure security. Komakech says Bosmic has ventured into partisan politics and notes that he seeks to use his musical background to hold concerts that threaten security.

Bosmic has in the recent past aligned himself with the People Power movement, a pressure group led by the Kyadondo East member of parliament Robert Kyagulanyi aka Bobi Wine. He was branded as the People power mobilizer for Acholi sub-region. Komakech says the artist cannot take both the musical and political life and urged that he chooses one.

Komakech has warned music promoters against booking Bosmic with aim of bringing him to perform in Kitgum and the surrounding districts. He also says that Bosmic still has pending cases to settle with police. He says the ban is not only in Kitgum district but also in other districts in the region.

Bosmic says that although he hasn’t been duly informed, the ban is a direct move to suppress his source of livelihood which he has been engaged in for many years. He notes that the ban won’t go unchallenged adding that he is making arrangements to sue the individuals suppressing his musical career in the disguise that he a politician.

Bosmic also alleged that the ban is being sponsored by the Kitgum Woman MP Beatrice Atim Anywar. Our efforts to get comments from Anywar to verify the claims were futile as her known mobile phone number was unavailable by press time.

Bosmic’s trouble with security in Kitgum district started in June last year after releasing a song titled ‘mac onywalo buru’ that mocks a number of top politicians in the ruling National Resistance Movement (NRM) party in the region.

The song was later banned from playing on all radio stations and in the public within the district. His affiliation with the People Power pressure group has also seen him fall victim to arrest by police. Last month, the police in Gulu arrested and detained him on allegations of holding an illegal rally.

Like Bosmic, Bobi Wine who leads the People Power pressure group has had more than 120 music concerts canceled by police since he joined politics in May 2017.

It won't be a surprise if Kitgum becomes Museveni's military/police base!

Every thing is in place for Museveni to just go on ruling till he drops dead of old age!

Yet, Museveni will also 1 day want to be a real ruler/real dictator & not the lame duck kept in power through the tribalistic system, especially now that Acholi are all out to ensure the demon rules for life without opposition from even them, the left out dogs completely destroyed, yet have now forghotten what Musveni did to them!

karemere, you are right, Museveni has Buganda in Central ensuring his hold on zone, but what will all tribes do when Musevnei will be no more?

... Bebe Cool and Kusasira who praise M7 and stand for NRM still perform!

The NRM in Uganda is the 'supreme law' NRM is setting Uganda on a dangerous path of revenge.

What a pitty, Acholi that should be the first to see the danger, are the ones now helping Museveni openly to just urinate on everybody for life!

Dr Obote was so right laughing at Acholi saying; What would you do without me as you have no leadership & will be lost dogs without me!

I would like to know hat all the other tribes that UNITED against Acholi to ensure Museveni comes in, say today about this 'Acholi love/trust in Museveni's rule they don't want to end!

Ugandans MUST bring down the tribalistic system & UNITE, to stop Museveni using them against one another or them getting at one another to please the demon!

The common enemy who controls tax money, land riches, freedom of speech & movement of Ugandans, is Museveni & MUST be stopped in UNITY, then our people will go for the kind of governance they want!

If Acholi had leadership, they would have been Independent State & stopped Museveni from killing them immediately he started doing so! But Acholi preferred being confined in UN refugee camps going in exile!

Now, Acholi are all out helping Museveni rule for life!

What scare is this, is Amin back with such orders

Even with Amin he never burnt ugandans in train wagons, never killed like in Kasese,Kicwamba,Kanungu etc

This NRM is a million times worse than Amin
Report to administrator
-1 #18 Lakwena 2019-10-22 09:20
This William Komakech is a very unfortunate person. He is so treacherous that: it would have been better if he were not born. Kumakech ideed is a disgrace to the people of Acholi.

In other words, since Mr. M7NRM shot his way to our State House and in Ugandan music is "insecurity" itself; then there has never been and there will never be peace in Uganda.
Report to administrator
12