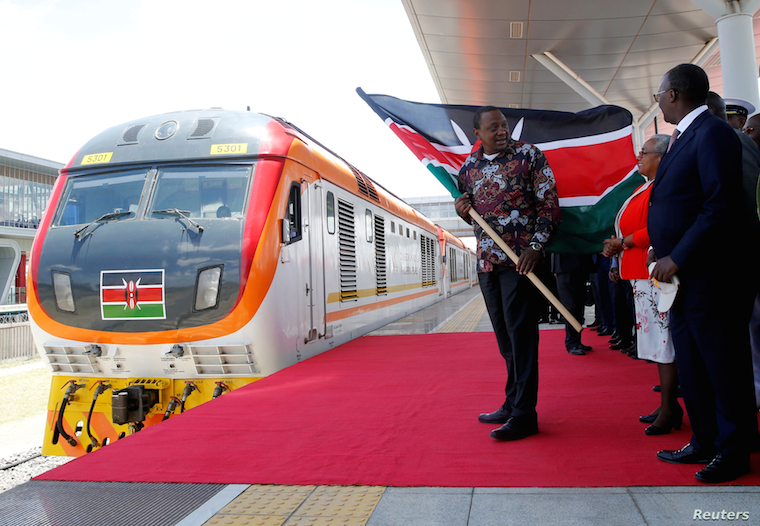 Kenya's President Uhuru Kenyatta flags off the train linking Nairobi and Naivasha at the Nairobi Terminus on the outskirts of Nairobi, Oct. 16

Kenya's President Uhuru Kenyatta officially opened on Wednesday the second phase of his flagship infrastructure project: a Chinese-funded and built railway that will eventually link the port of Mombasa to Uganda.

The latest stretch of track cost $1.5 billion and runs from Nairobi to the Rift Valley town of Naivasha. But critics say the cost of the railway is plunging Kenya into debt. Waving the Kenyan flag, Kenyatta inaugurated the second phase of the country's new railway.

The president then joined the first ride and listened to the on-board announcements. The new track is 120 kilometers (75 miles) long and has 12 stations.

Passengers can ride the trains, but the railway is mainly for cargo. The track will eventually lead to an inland container depot, from where containers will be distributed to Uganda and Rwanda, and to South Sudan.

The train stopped at every station, where a cheering crowd awaited the president. He promised them that the new railway will bring prosperity. Kenyatta said that if the railway comes here, development also comes here. 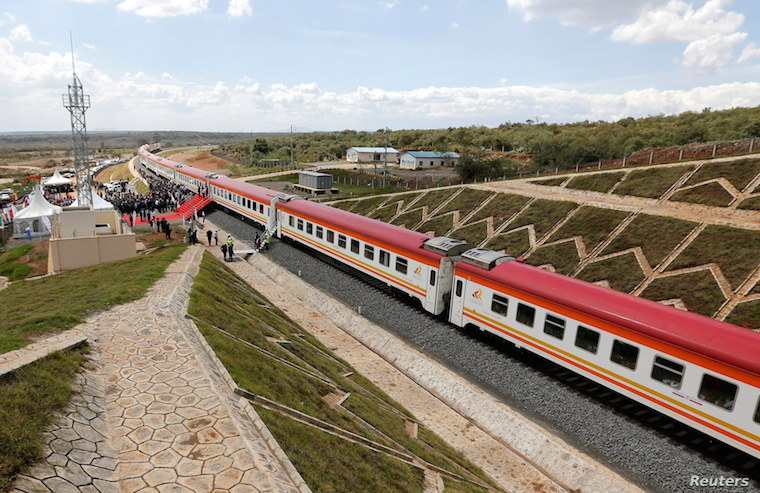 The cost of $1.5 billion for construction of the second phase comes up on top of the $3.2 billion spent for the first stretch from Mombasa to Nairobi. President Kenyatta says this money will be earned back by the economic development spurred on by the railway.

"The completion of the Nairobi Suswa section of the SGR project is expected to revolutionize the development of the surrounding areas,” Kenyatta said.

The loans are with Chinese banks. Wu Peng is the Chinese ambassador to Kenya. He said in return China is not only lending but also investing in Kenya with the coming of the railway

"We encourage Chinese enterprises to invest in the Naivasha ICD and the special economic zones,” Peng said.

The railway currently generates $75 million per year from passengers and cargo. At that pace, the loan will be paid back in 60 years.

Kenya hopes to see revenues rise once the railway is connected to the neighbouring countries. However, there is no timetable for construction of the third and final phase. Officials have yet to secure the financing.

Kenyatta has no where else to take regure in & he is making sure he is not thrown out of Kenya!

Museveni only came for Uganda money & has looted enough to live on anywhere he will want to, just as Amin did!

If Kenyatta give his people chance to help from B. Obama, then why wouldn't they give him second term?

How is normal Kenyatta is friendly with demon Museveni in power since 1986 who tribalistically divided Ugandans & allows no opposition from the people who gave him refuge?

it is bewildering. Oh my God, with this types of leader cling to power; when will this country get ahead of its misery?

Only Ugandans can bring an end to Museveni by first bringing down the tribalistic system, then their UNITY!

Was it not Ugandans from all the other tribes that UNITED to say NO to Acholi & did Acholi not stand down in respect of that UNITY?

It's ugandans maintaining the tribalistic system without which Museveni is LANDLESS in the zone!

It's Ugandans who teargas/harass/block/arrest & try in court & imprison any one who dare mock/defie Museveni?

For the last 33 years, i and my country men have rendered onto Caesar and his agents the things that are Caesar's.I wish we could stop.

My erstwhile peers mock me with their grand achievements, peace and stability, modernization and steady progress.

I wish i hadn't been so myopic all these years.
Now my sons and grandsons think I am ungrateful for not being content with the little i have.

I wish they could open their eyes.
Like the hills I have bided my time and watched as Caesar abused my fealty and hard work.
I wish I had given it to the other.

"You shall not swear fealty to another" he bellows but at pains of losing all that is dear to me I am laden with conviction to disobey his orders.I wish I didn't have to sin.

But the toils of his maladministration have become so bare, like an ulcer they bleed the motherland. I fear he has lost the fear of mortality.
Report to administrator
0 #14 rubangakene 2019-10-17 21:54
The problem with Uganda leaders is that they are tied to the Quasi - Napoleonic notion that only one person has the wisdom to micromanage everything from the top while the rest of us follow.

If Ugandans were allowed to be creative and not "put down" every time they propose a good agenda, our transport infrastructure would have flourished.

After thirty years, it angers me to see decent people travelling in 'cattle grade' rolling stock because "Napoleon knows best what is good for you".
Report to administrator
+1 #15 Lakwena 2019-10-18 08:18
Quoting Angered Ugandan:

But why is it that every single article that The Observer posts has to have hateful or angry comments about Museveni or indirectly aimed at Museveni? ...

Angered Ugandan, don't be amused. You may get hit in the face with a shoe.

Where I come from, the ethical and moral integrity of an elder/leader is tested with something as simple as food.

In other words, aren't you concern that in 34 years Mr. M7 and ilk wasted a lot Ugandans time, consumed and continue to consume a disproportionate amount national resources on themselves, at the expense of millions of unemployed youths?

Didn't Mr. M7 himself say that he is in State House only fighting for himself and family: doesn't that make you angry? E.g. did you ever see Miria Obote in a 10-vehicle convoy and a platoon of soldiers?
Report to administrator
0 #16 Lakwena 2019-10-18 10:45
I thought Madam Janet M7 is a savedee. How comes she still does not feel safe?

Jesus didn't even own a donkey, had nowhere to put his head, and was crucified like a despicable criminal.

What makes born again Christians like Janet M7 think they are so special that every Ugandan should clear the way for her whenever and wherever she goes?
Report to administrator
12