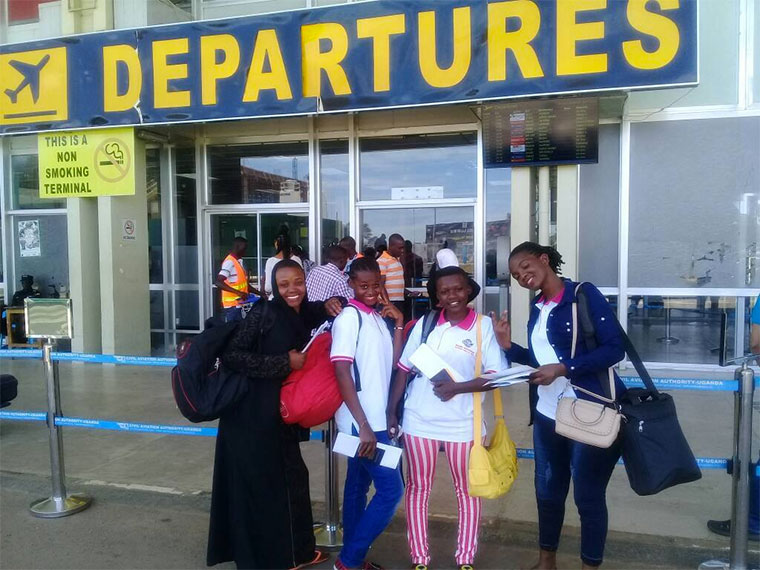 A Ugandan woman who had travelled to Saudi Arabia to work as a housemaid is nursing life-threatening injuries sustained during the time of her employment in the Gulf.

The victim, who requested anonymity, travelled to Saudi Arabia on a two-year contract, effective last year, through a recruitment agency in Kampala. Her travel was fully funded by Marphie International Recruitment Agency, after paying a registration fee of Shs 50,000 and an additional Shs 50,000 for the company shirt. She had earlier spent Shs 300,000 to secure a passport.

The 30-year old’s travel documents show that she left the country on September 19, 2018, through Entebbe international airport, hoping for greener pastures and a life full of glee, fun and money. According to her contract, she would earn up to Shs 900,000 a month.

Indeed, she found her prospective employers waiting to receive her at the airport, from where she was taken to their home. But before she could settle in, her passport was seized, together with her phone, as the testament has been for so many other girls who have gone to the Middle East, where they are employed as nannies and housemaids.

She was cut off from the outside world and forced her to adopt an Islamic lifestyle. Her workload required her to work for not less than 14 hours every day, singlehandedly running chores for the entire household. This meant that she spent more hours standing and running around, and hardly rested.

A few months into the contract, the young woman developed severe chest pains, signalling the beginning of her misery as she struggled to cope in a foreign land. She adds that during the time, she endured food deprivation, nonpayment of wages and psychological abuse.

The mother of three explains that she sought medical help when her health condition deteriorated. The condition was attributed to excessive work and she was advised to relax her schedule, as part of the treatment.  But the medical advice was ignored and the workload resumed as soon as she left the hospital.

Within no time, she could hardly stand. Her body became weaker and fragile. Consequently, she pleaded with her employers to send her back home, a country she had left, in the hope of running from a hopeless situation. But at this point, the bleak Ugandan situation was far better than the idealistic hope away from home.

On February 2, 2019, she boarded the plane back to Uganda, ending five months of distress. All she had was an equivalent of one month’s salary, the sole payment given to her since her arrival. Her ticket was paid for by a member of the Ugandan community in Saudi Arabia, whom she reached out for help as soon as she was released from the ‘cage’

She says that upon her arrival, she sought the intervention of the employment agency, albeit in vain.  But the company’s human resource manager only identified himself as Raphael, said the case was unfamiliar to them. He was also quick to note that their agency follows up on all the people they recruit to work abroad and ensure they are in a good state.

Without money but only excruciating chest pain, the resident of Kasese is now staying with sisters that belong to the Association of Religious in Uganda (ARU) Fort Portal branch, where she is receiving treatment.

Sister Margaret Kabanywezi, the coordinator of ARU in Fort Portal says they were touched by torture victim's story and decided to take care of her. The association has also petitioned government institutions in the Rwenzori region, for an intervention to end issues of human trafficking.

The victim says her experience was a lesson, which she is now using to caution Ugandan girls to be very careful before leaving the country to allegedly work abroad. Over the past few years, tens of thousands of Ugandan women have travelled to the Middle East, lured by the promise of well-paid work and an improved standard of living. However, their stay there is characterized by widespread claims of exploitation and abuse.

Often, images are shared on social media platforms, showing horrific pictures of girls who have endured torture, pleading for help to return home. Such reports had forced the government to ban its citizens from working in Jordan and Saudi Arabia in January 2016.

But the ban was lifted in June 2017 after the Ugandan government signed agreements to protect Ugandans seeking employment in Saudi Arabia and Jordan from abuse and exploitation. The agreements were purposed to improve the welfare of workers and promote their rights.

It was stipulated that maids were entitled to agreed salaries, eight-hour workdays, with breaks, as well as access to the travel documents and communication gadgets. A report released by the Human Rights Watch in 2016 estimated that there were more than nine million migrant workers in the Middle East involved in doing manual, clerical and service jobs, which tantamount to forced labour.

According to the rights body, the problem can be traced to the sponsorship system which ties migrant workers’ residency permits to ‘sponsoring’ employers. This implies that no worker can change employers or even exit the country without the written consent of their employer.

+1 #1 Lysol 2019-10-16 21:59
Our corrupt regime uses modern slavery to send our youngsters to foreign countries in order to exploit them in order to sustain itself in power for life. Uganda has became a hot-bed for the human traffickings and mercenaries (with the so-called peace keeping jobs).

Many of our youngsters suffer mental traumas or die/killed out there and when they come back home.

The so-called Peacekeeping paradox or policing is always left for the weaker armies. Stronger armies like the US or UK always fight and win the wars and leave the weaker armies to do the policing and clean the shits after they left.

Of course, they pay them a few dollars to clean up in order to keep them happy. Asides from donating the used military gears they leave behind.. There is no pride on that.
Report to administrator
+1 #2 WADADA roger 2019-10-16 23:06
Sadly, many of our young people still go to Saudi Arabia for work partly because they dont have a choice
Report to administrator
0 #3 Francis Okello 2019-10-17 11:27
I travel to and from Uganda regularly, and each time I've flown Ethiopian Airlines, I see a hoard of young ladies headed to Arab countries for jobs.

It just shows the level of desperation of the Ugandan youth. You can spot them easily. They move in groups, dress uniformly, have brand new passports, are guided, the majority wear Islamic gear.

While there's nothing wrong with seeking foreign employment, I'd expected the horror stories from other girls about these jobs to discourage others, and more importantly, to attract the attention of the government to regulate this business and to ensure our foreign affairs folks have protective mechanisms for their citizens abroad and to hold the recruitment agencies accountable.

More importantly, I feel sad that my country cannot really assure basic employment for young people yet a lot of money gets wasted in political gymnastics, corruption and embezzlement, which, if plugged, is more than sufficient to reduce unemployment in Uganda.
Report to administrator
0 #4 Akao 2019-10-18 02:41
Someone need to take a lead on this, an NGO, religious leaders. People need to be senseticed on this, in churches mosque's etc.

I think the media is doing a good job reporting this, but if this is left to the government young women will continue to suffer and die in the hands of these monster Arabs.

Asian women especially Filipinos and Indiansee used to be this storis we are hearing about Ugandan women, there is actually a book written in the 1990s about abuses of maids in Arab countries.

This is not new and they are not about to stop, people need to stop going there and find something else to do
Report to administrator
0 #5 Peter paul 2019-10-18 09:59
very bad experience and we pray for those still in slavery
Report to administrator
0 #6 rubangakene 2019-10-18 18:37
Why lament now? Nobody forced them to go to do "slavery jobs", they are themselves to blame.

There is no easy money in those places; is sweat and blood and much more than the eye can see.

You virtually sell your soul on those jobs; jobs that don't even pay. My advice to Uganda is "KAMATA ZEMBE, ENDENI SHAMBA" - "Take your hoe and head to your land and dig and die with your dignity intact".
Report to administrator
-1 #7 Abdul Hakiimu Bin Su 2019-10-22 17:38
Sincerely speaking this is so sad but I'm sure this will never end until ladies will come to know their boundaries where by they are supposed to get married and stay at their husband's home;.
Report to administrator