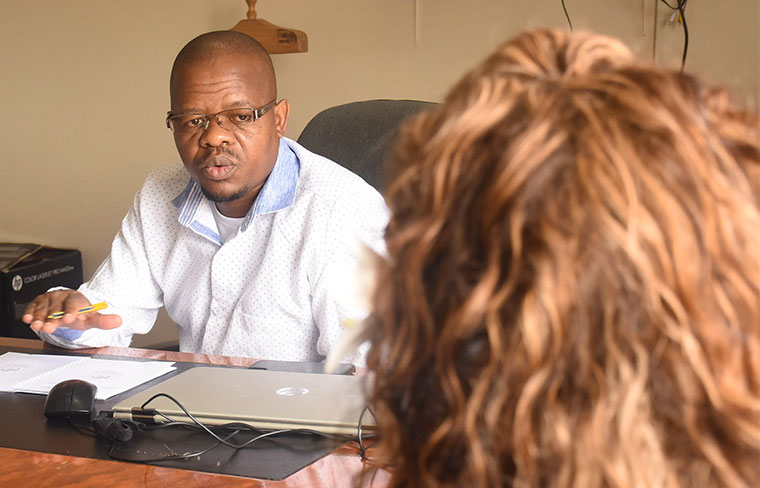 On September 3 when the fax machine at Fufa House, Mengo, made its dial-up noise and spilled out a letter from Fifa’s Code of Ethics committee, announcing a career-crashing three-year suspension of Moses Magogo from football, he panicked and hastily called his friend Gianni Infantino, the president of world football governing body, Fifa.

He begged, pleaded and threatened loudly, and finally Fifa caved in and agreed to commute his three-year suspension to two months, a decision announced weeks later on October 10.

The suspension was punishment for Magogo’s role in the controversial resale of the 2014 World Cup tickets. Last week, Fifa officially suspended Magogo for two months and fined him $10,000 or Shs 37 million. The decision, however, has been widely criticized as too light for the president of local football federation, Fufa.

However, new details suggest Fifa had been harsh initially and had handed Magogo a three-year ban. Highly-placed insider sources at Fufa House have told The Observer that on September 3, Magogo received a draft letter by fax notifying him of a three-year suspension and a fine of more than Shs 60 million. The letter was signed by Skouris Vassilios, the chairperson of Fifa’s Code of Ethics committee.

Magogo, according to our source, was incensed by the decision.

“Upon receiving and reading the letter, Magogo picked up his phone and immediately called his close friend [Fifa president] Infantino. He specifically inquired what the hell Skouris Vassilios was talking about in the letter,” the source said.

According to the source, Magogo, “…raised his voice and said he was not leaving office over baseless and unfounded allegations based on a system he found in place. Infantino immediately called Skouris and asked him to withdraw the letter.”

Our source further revealed that: “Within minutes, another fax from Skouris – withdrawing the letter as well as apologising to Magogo, came in. Many people wondered why Magogo was being treated with kids’ gloves until they learnt that the Ugandan is the Fifa president’s personal advisor on African affairs.”

“The two-month suspension is what we asked Fifa for and true to their word is what they have given us,” the source added.

The source, one of Magogo’s confidants, also scoffed at Magogo’s critics.

“Come December 10, 2019, Eng. Moses Magogo will be back at Mengo to do what he does best… take Ugandan football to the next level. It will be the perfect Christmas gift for Ugandan football lovers in 2019,” he boasted.

The Fifa probe and subsequent suspension of Magogo followed a petition filed by Makindye West MP Allan Ssewanyana in 2017. Ssewanyana accused Magogo of selling illegally the 2014 World Cup tickets on the black market yet they were designated for Ugandans – thereby breaching Fifa’s Code of Ethics and Disciplinary Code.

In his petition, Ssewanyana alleged that the 177 tickets allotted to Uganda ended up in the hands of American and South African agents, who sold them on the black market. According to Fifa, when a country fails to sell its allotted tickets to the designated market, they are supposed to be sent back to Fifa.

While addressing the annual Fufa General Assembly on September 28 in the West Nile district of Adjumani, Magogo announced he was stepping aside for two months. It was a surprise announcement to many delegates but Magogo’s inner circle at Fufa House had been prepared for the news. Magogo confirmed his deputy Justus Mugisha would be in charge.

“This case can go on for ages but to dispose of it, once and for all, I was advised to step aside,” Magogo told Fufa delegates, emphasizing the element of a plea bargain agreement.

Indeed, 12 days later (on October 10), Fifa released a press statement on its website confirming that Magogo entered a plea bargain agreement to close the investigation. He was, accordingly, suspended for two months and fined $10,000 in line with article 67 par.1 of the Fifa Code of Ethics.

Paragraph six of the same article dictates: ‘No plea agreement should be allowed in sanctions relating to infringements of bribery and corruption; misappropriation and misuse of funds; and manipulation of football matches or competitions.’

While Fufa maintains that its secretariat committed a simple ‘anomaly’ in the transactions during the resale of the tickets, our sources confirm it was a deal gone bad between Magogo and the American agent, who sold the tickets on the black market.

Fufa vehemently denied any knowledge of a Fifa investigation back in July 2017 when Ssewanyana petitioned the world football governing body. But in the face of ferocious criticism following last week’s suspension of Magogo, Fufa spokesman Ahmed Hussein admitted there was an ‘anomaly’ in the handling of the tickets and promised the federation had learnt some lessons.

Writing in this paper, Hussein stated: ‘Have we learnt a lesson from this scenario? Other than looking at crucifying an individual and the institution, it is our responsibility at Fufa to learn from the anomaly and get things better as we plan for the 2022 Fifa World cup and subsequent tournaments.’

He writes: “It is good that Fifa pronounced itself on the matter as the suspension is now being served and the fine already paid within the deadline. In essence, the matter was closed and Fufa will not carry out any investigations on secretariat staff into this anomaly that led to the suspension of the fountain of football in the country.”

According to him, Fifa’s concern was ‘a matter about the resale of tickets as per their decision which is treated as a breach of the Ethics code, but not categorized as an abuse of office, fraud and corruption.’

Commenting on the leniency of Magogo’s punishment, the Fufa spokesman said an explanation ‘will be availed to the authorities as and when required.’

He stated: “It is obvious the decision has left some people unhappy as they feel Fifa was lenient. There are suggestions that aggrieved parties want to take the matter further to the courts of law.”

“The institution and the individual have accepted to abide by the Fifa decision released by its competent judicial body – the Investigatory Chamber.”

He further explained that there are no free tickets allocated to Fufa by Fifa to give out to the public. However, there are different ticket categories, which fans can secure when need arises and as per their plans for the World Cup.

“The tickets purchased by Fufa are strictly meant for the football family which they sell to recover the money spent or give out to their stakeholders like sponsors, sports bodies and government, to mention but a few,” he said.

However, Kavuma Kabenge, a veteran lawyer and former club football administrator, said Magogo was duly charged for his involvement in the direct sale of tickets.

“It was a personal thing; he’s a self-confessed thief of football resources,” Kabenge charged, adding that “being president of the federation does not make Magogo an employee of Fufa and therefore, it should not have been the secretariat to be blamed for this tickets scandal.”

According to Kabenge, some of the tickets allocated to Fufa were complimentary and others for resale. “You are not supposed to sell the complimentary tickets. The ones for resale are coded once sold by the secretariat for security reasons so that Fifa has details of who bought and ticket number. If you don’t sell them, you return them to Fifa,” he explained.

In the aftermath of serving a suspension and paying the fine, Kabenge said, Magogo is not fit to continue leading Fufa.

“Football is an activity that mirrors society; so, he’s no longer a role model to the youth and general public which follows the game. It would be wise for him to quit,” he said.

Interviewed on October 14, Ssewanyana, the petitioner, was happy with the Fifa decision because it brings closure to Fufa’s continuous denials that nothing wrong happened.

“I am excited with the Fifa ruling; it goes to prove that Magogo was engaged in so many dubious activities – taking advantage of his Fufa presidency. The ruling shows that he sold tickets on an international market but didn’t remit any taxes to government of Uganda as required by law – which is why, the CIID and IGG should also become interested in this case,” he said.

He added: “I don’t mind about the lesser sentence handed down to Magogo – because that’s what is contained in the Fifa regulations but it is the criminal character of the person of Magogo; this shows that if he can sell tickets to a third party to obtain money, it would be too easier on his side to take the players’ allowances entrusted to him by the government of Uganda – as the case was during the Afcon finals 2019 in Egypt.”

“I did my cardinal job as a Ugandan, despite all the odds –ranging from physical, emotional and financial challenges; that’s why the CIID picked interest and requested me for detailed evidence when I visited their headquarters in Kibuli last Friday (October 11).”

“What remains now is for the other people I mentioned to make statements (at CIID) and I am sure the case would take a new path, as enshrined in the Ugandan laws; what we want is even for people like Peninah Kabenge and Edgar Watson to be added onto the charge sheet – because they too, participated in this fraud – but all this has been possible due to Fifa’s trust and cooperation in this issue, which we started as the public challenged us to produce evidence.”

Interviewed again yesterday, he said Magogo and Watson will be interviewed by police this week. He strongly believes Watson will take his interview on Thursday.

He joined Fufa assembly in 2005 as a delegate for Lubaga division.

He was deputy to former Fufa boss Lawrence Mulindwa between 2009 and 2013 and secretary competitions committee, from 2005 to 2009.

Currently, he is a member of the Caf executive committee. Caf is the African football ruling body.

When The Observer called him yesterday (October 15), he declined to discuss the issue. “I have no comment to make at this juncture,” he responded before hanging up.

By press time Fifa had not replied to our email asking for more details about  Magogo’s case.

PROCEDURE OF GETTING WORLD CUP TICKETS

Every World Cup year, Fifa announces the availability of tickets to its member associations. The member associations then call on their nationals interested in watching the World Cup, to apply for tickets – indicating the specific matches they want to watch.

The application process has a deadline. After the expiry of the deadline, the local member association, in this case Fufa, writes back to Fifa specifying the number of tickets it wants, pegged on the names of the applicants.

Then, Fifa sends the tickets to the respective recipients through (Fufa), with an invoice. In turn, Fufa alerts whoever applied for the ticket, to pick them. The applicants pay the exact amount of money reflected on the ticket. After receiving this money, Fufa remits it to Fifa, including the invoice.

So, if that is the case, how did Magogo navigate this very elaborate and intricate process? From his own submission, he said there was an anomaly, but one, that followed previous practice in handling these tickets.

However, Denis Mbidde, a former Fufa vice-president, told The Observer that for the period he was in Fufa, World Cup tickets were never discussed. Interviewed, Mbidde’s predecessor, Mujib Kasule said the entire process was a hushed affair. Yet from research, it is apparent that once the tickets come in, Fufa is supposed to inform the public.

This opens the door for applications.

-3 #1 Stewart 2019-10-16 19:02
If given Uganda, guys south of Lake Kyoga can sell it wholesale, to them it comes naturally, genetical thieves, I don't care what who will say about that statement but its a big shame.
Report to administrator