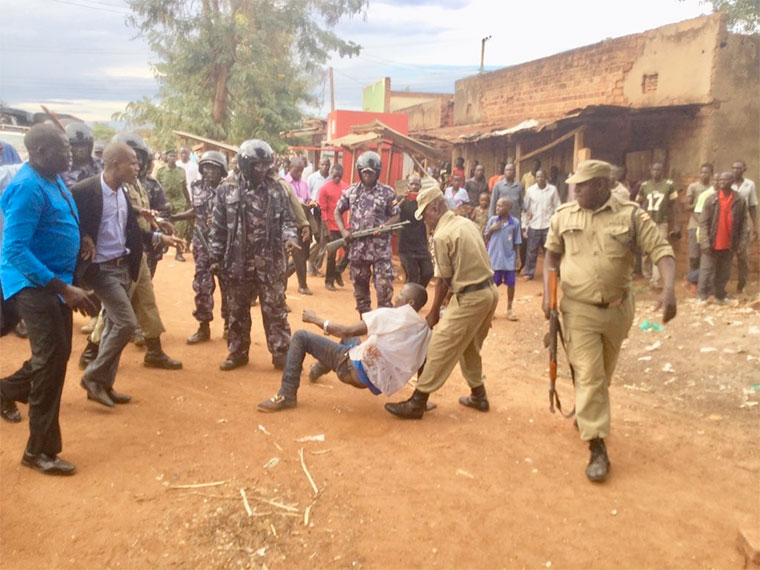 A new report by the National Coalition of Human Rights Defenders Uganda suggests space for holding government to account is shrinking fast ahead of the anticipated 2021 polls.

The report titled, ‘Democracy on Trial, Human Rights Defenders Working in the Context of Elections in Uganda,’ compiled between October 2015 and April 2019 details numerous human rights violations especially by police and UPDF.

He said police and other security organs leaning repressive laws such as the Public Order Management Act, the Computer Misuse Act, the Uganda Communications Act, among others, have flagrantly violated people’s rights, especially state opponents’.

“There is need to amend these laws so that they conform to the dictates of the Constitution, which says Uganda is a democracy,” Mayambala said.

The report says government targets both its opponents and rights defenders.

“The main perpetrators are officers of the Uganda Police Force, Uganda People’s Defense Forces and unregulated militia groups and local government leaders. The attacks were largely influenced by vague and repressive laws such as sections of the Public Order Management Act, and the Computer Misuse Act, limited effective police investigations, immunity for violation and militarization of policing work and law enforcement,” the report says.

It adds the media was not spared either in the crackdown. It details numerous cases where editorial independence was compromised including, switch-offs of radio stations and harassment of media workers. Other incidents include; blocking media appearances by HRDs and opposition political leaders especially in upcountry media houses at the urging of police and resident district commissioners.

“In most cases, payment for appearances had been received by the management of the media houses but after being approached by the local authorities, they acted on the orders and cancelled the shows. In some cases, the police physically through the use of force blocked opposition leaders from accessing the studios and radio stations...” the report notes.

Early this year, FDC former president Dr Kizza Besigye was dragged out of radio stations in different parts of the country without clear explanation. The introduction of the Over the Top Tax in April 2019 was also viewed as an affront on the freedom of expression especially for the young people.

This, the report notes, will widen the digital divide between those who can afford the tax and those who can’t. The report further documents the several incidents of illegal arrests, incommunicado detentions and forced disappearances that flout all established arrest and detention procedures.

“HRDs were detained beyond the 48-hour constitutional detention period, at times outside gazetted places - in military barracks and safe houses. Most of the victims fear to report the incidents due to threats and intimidation from perpetrators. The few who reported, were often frustrated by the manner in which their complaints were handled and the high cost of litigation,” the report notes.

There is also an increase in the clampdown on civil society organisations that are actively involved in election and democracy-related activities. These organizations were targeted for surveillance, intimidation, ad-hoc investigations, freezing of bank accounts, profiling of people working with them, confiscation of property such as computers and other financial records, and suspension of accreditation to monitor elections.

Speaking at the launch of the report, Brigadier Henry Matsiko, the UPDF Political Commissar, said the research was biased against security organs.

“These people who carry out research should be objective; if you go to do research, you need to point out facts as they are not as you subjectively suspect them to be. Some of the areas talked about seem to be stereotypes as if there is a template, they have to follow that even if there is no brutality, and the template says brutality, you have to put something there. This is our quarrel with some of these reports,” Matsiko said.

However, Joel Ssenyonyi, the spokesperson of People Power, whose members have suffered the harshest brunt of persecution, said the report clearly captures the situation in the country.

“Uganda’s democracy without a doubt is on trial. The Supreme court has found elections to neither be free nor fair; not once, not twice but three times. There is voter bribery, ballot stuffing, voter intimidation and that’s what we call democracy on trial,” Ssenyonyi said.

Meanwhile, Matsiko also warned People Power not to walk a dangerous path by insisting on wearing the red berets, which the UPDF gazetted recently as its military attire.

He said those questioning the gazette must realize that the state is an instrument of regulation and execution and that the military is the singlemost guarantor of stability of Uganda.

“There is no reason why there should be any conflict between what the military is doing and what the civil society is doing. People who are insisting on giving an impression that they are in competition should be careful because this is not the first time that civilians have attempted to do their work through military means. If you are in the city and you want to be an insurgent, don’t think you have immunity...” he said.

+3 #1 Zaitun 2019-10-16 15:50
According to these men in uniform, it is quite normal for them to oppress Ugandans as they would like Museveni and his clansmen implement the secretly concluded road map in the early 1990s on how to squeze life out of Ugandans.

Everything was written in black and white on how the clansmen would for 50 years reduce Ugandans to beggers by dismantling every economic and social organisations destined to empower Ugandans- health, economy, education, depossession of Ugandans of their rightful land...; turning the Greater North and East as power base for poverty; while the South would be allowed to have the Kabaka, but always a stooge to Museveni and his company etc.

While their some who were opposed to their tribal politics were physically eliminated.

Since they have not finished with their master plan to see their children the best educated, billionaires, having control of every piece of land, they will continue rigging elections with the help of their famous stooges.
Report to administrator
0 #2 Phalanch 2019-10-16 16:16
In all there is no space left for Ugandans to turn to .

We are being pushed over the edges , Everything has a limit at one point.

HUMAN BEINGS we were not designed to live in a constricted environment for long and without a doubt this bubble is destined to bust.
Report to administrator
+1 #3 Hitler 2019-10-17 08:10
So is life!! Ecological niche. Until Ugandans wakes up strong and chose their direction without fear or favor, we are destined to be paupers in our famous ancestral land.

Fairness will never prevail and Ugandans will be sidelined until many races will be cleansed out. I foresee blood shed in future for Uganda to get back to a national status not a one family Business.
God help us!!
Report to administrator