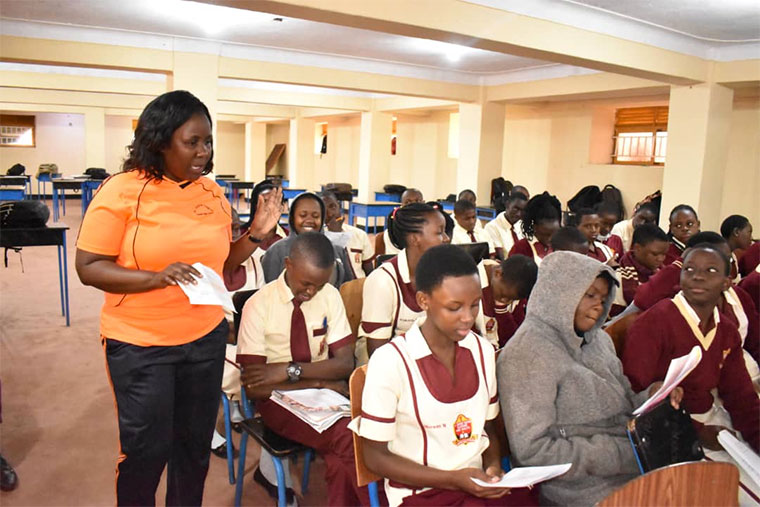 Some 337,697 candidates have registered to sit for this year’s Uganda Certificate of Examinations (UCE) from 3,531 centres across the country. This represents an increment of 963 candidates (0.28 per cent) from last year.

While announcing the start of the examinations at Uneb offices in Ntinda, Uganda National Examinations Board (Uneb) executive secretary, Dan Odongo said headteachers are expected to personally explain clearly to candidates their responsibility - with an emphasis on caution against examination malpractice and its consequences.

He urged headteachers not to delegate their role of briefing candidates to other staff as they prepare to start final examinations next week.

“Experience in previous examinations indicates that breach of rules and regulations by candidates occurred most commonly at centres where the briefing was poorly done or not done at all,” Odongo said.

“To teachers, I strongly warn you to leave candidates to write their examinations. You have had four years to teach and it is now for the students to show what they have learnt.”

He said examination malpractice is a vice and a cancer that eats at the very core of the education system of the country as well as attacks the credibility of Uneb certificates both nationally and internationally.

“While those headteachers, school directors, teachers who actively participate in, and parents who contribute the money to facilitate this criminal activity look at the short term gain of good results through fraud, they are not mindful of the great damage being done to those learners and the nation,” he said.

This year’s examinations for the three levels of P7, S4 and S6 will be conducted under the theme: “Integrity and Security in the management of Examinations is My Responsibility”

According to Odongo, the number of female candidates, for the first time, has surpassed that of males making up to 50.2 per cent, an increase from 49.5 per cent in 2018.

He said this is a significant development as for the last four or so years, “we have been reporting more female than male candidates registering at PLE and now it's beginning to come through at UCE.”

Out of the 337,697 candidates, 144,260 are from government schools and 193,437 private. The total registered candidates include 401 candidates with various forms of disabilities such as blindness (36), dyslexia (sighted 21; blind four), hearing impairment (60) and severe physical handicap (75). Those with low vision are 88 while those in need of extra time are 117.

Practical examinations in Home Science subjects (Food and Nutrition and Home Management), oral and aural examinations in French and German languages and Music conducted by visiting examiners have been ongoing since September 23 and have ended.

Personnel from all security agencies will operate both overtly and covertly while exam materials will be distributed through 24 routes, with a transport vehicle for each and adequately secured.

Police spokesman Fred Enanga said strict guidelines have been issued to its officers especially those attached to storage centres and transporting of exam parcels to schools.

“We are very alert and our intelligence teams are on the ground to watch whoever intends to tamper with any question papers,” Enanga said.

Last year, question papers for Biology, Chemistry and Christian Religious Education were posted on social media hours before candidates sat. Uneb investigations showed that the epicentre of the leakage was an examination storage station in Busesa located after Iganga.

Not siting to close to one another. The room looks too crawdad.

Well that is what we get when the regime has a former baby sitter to run the education ministry( with a 4th-grader education). Mugabe at least faked a PhD for Gucci Grace.
Report to administrator
0 #2 John 2019-10-14 14:52
Quoting Lysol:

Back in our times when we used to sit for those exams we used to have our own separate desks and space.

Not siting to close to one another. The room looks too crawdad.

Well that is what we get when the regime has a former baby sitter to run the education ministry( with a 4th-grader education). Mugabe at least faked a PhD for Gucci Grace.

Lysol, do not be like a guy who was told he had a medical examination and he started revising. Students dont need to be spaced to be briefed
Report to administrator