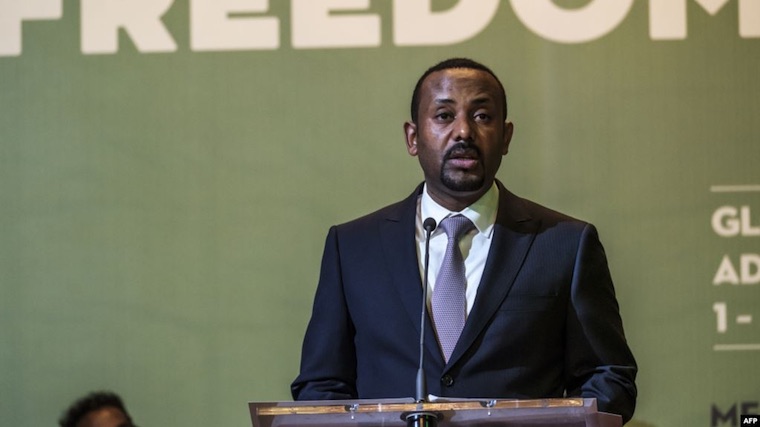 Berit Reiss-Andersen, the chairperson of the five-member Norwegian Nobel Committee that awards the Peace Prize, said Abiy was named for his decisive initiatives to end his country's conflict with Eritrea within months of his coming to office in 2018.

"I have said often that winds of hope are blowing ever stronger across Africa. Prime Minister Abiy Ahmed is one of the main reasons why," he said in a statement Friday.

The Nobel Committee also took note of Abiy's push for reforms within Ethiopia, largely aimed at easing the government's control of political discourse in the East African country.

"He spent his first 100 days as prime minister lifting the country’s state of emergency, granting amnesty to thousands of political prisoners, discontinuing media censorship, legalizing outlawed opposition groups, dismissing military and civilian leaders who were suspected of corruption, and significantly increasing the influence of women in Ethiopian political and community life," the committee said.

The committee acknowledged that much work remains to strengthen democracy in Ethiopia, but said it hopes the peace agreement with Eritrea will lead to more positive changes for both countries.

The East African neighbours fought a brutal war from 1998 to 2000 and remained at bitter odds thereafter over unresolved land and border issues.

After Abiy came to power in April 2018, he said Ethiopia would comply with a 2002 ruling forcing it to cede territory, including the contested town of Badme.  In July, he and Eritrean leader Isaias Afwerki signed a peace agreement officially ending hostilities.

"[His] bold leadership has helped drive through positive changes in Ethiopia and achieve a rapprochement with Eritrea. But there is a lot of work to do to achieve a new domestic political settlement between fractious actors, and there are also major obstacles to advancing the Eritrea peace process, suggesting that Abiy's hardest challenges lie ahead," he said Friday.

Rights group Amnesty International said the Nobel prize "should push and motivate [Abiy] to tackle the outstanding human rights challenges that threaten to reverse the gains made so far. He must urgently ensure that his government addresses the ongoing ethnic tensions [in Ethiopia] that threaten instability and further human rights abuses."

The Nobel Prize committee also recognized Abiy for his role in other peace and reconciliation processes in East and northeast Africa.  Last year, Ethiopia contributed to the normalization of diplomatic ties between Djibouti and Eritrea after years of tension. In Sudan, he helped resolve an impasse between the ruling military council and opposition, paving the way for a power-sharing agreement.

Abiy, 43, came to power in April 2018 and began to implement sweeping reforms and changes in Ethiopian policies. In an interview with VOA's Horn of Africa service in May 2019, Abiy acknowledged that he planned to be an agent of change.

"I don’t believe that it’s proper to stay in power for long periods of time. And as long as I have power, I believe that I should use that to change people’s lives. But within my efforts working to bring change, there may be errors — but all of my intention and action is aimed at elevating Ethiopia," he said.

The prize of about $900,000 will be presented in Oslo on December 10. The Nobel Prize in Economic Sciences will be awarded on Monday, October 14.

0 #1 rubangakene 2019-10-12 19:30
Congratulations Abesh!
I wish all African leaders were like you, the world would be a better place.
Report to administrator
0 #2 Lysol 2019-10-12 20:41
That should set an example to those African dictators who still think they can achieve peace through wars or guns.

The likes of Museveni will never get the Noble Peace Noble Prize however hard he tries in Somali or some where-else with his mercenaries as peace keepers.

He is the belligerent himself who goes around desalinizing other African(neighboring) countries. He should humble himself and just go away.

The likes of that youthful Mr Abiy are the future of the next generation of Africa leaders. Congrats to him.