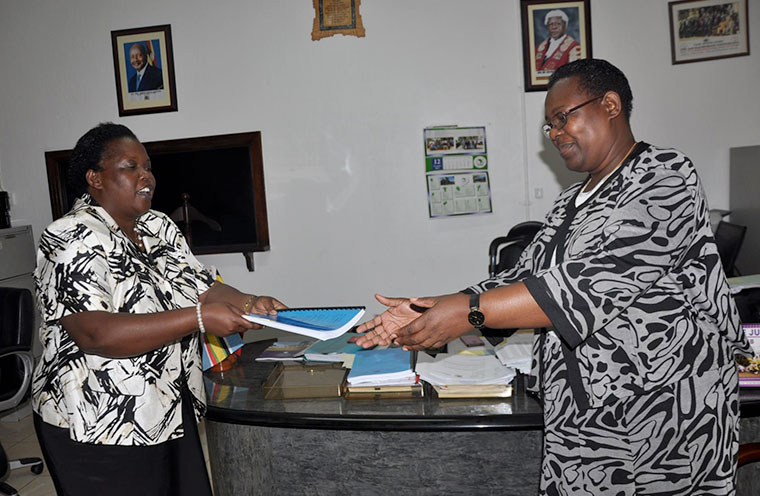 The ministry of Public Service has interdicted the secretary to the Judicial Service Commission Dr Rose Nassali Lukwago over corruption allegations.

Nassali was charged before the Anti-corruption court in August this year, for abuse of office and causing financial loss to the government after reportedly paying Shs 33 million arbitrarily to AH Consulting Limited in the financial year 2014/2015.

The offences were traced to her positing in the ministry of Education, where she had worked before joining the Judicial Service Commission. Nassali was charged alongside Opio Okiror, the commissioner for Human Resource and Cuthbert Kagabo, the former director of AH Consulting Limited.

It is alleged that Nassali, abused her authority when she illegally contracted AH Consulting Limited to recruit five technical staff to work for the ADB V HEST project, well aware that the required five technical staff had already been recruited. The act, according to the inspectorate of government was prejudicial to the interests of the government of Uganda.

It is further alleged that Dr Opio contravened the responsibility of contract manager set in the public procurement laws when he failed to ensure that AH Consulting Limited performed all terms of the contract to recruit staff for the ADB V HEST project.

Although the Justice minister Kahinda Otafire had written to the chairperson of the Judicial Service Commission justice Benjamin Kabiito asking Nassali not to resume work, she defied the directive and went back to work.

Now in a letter dated October 11, the head of Public Service, John Mitala said that because Nassali is being prosecuted before the Anti-corruption court, the IGG has directed that she should be interdicted with immediate effect and not perform any duties until the trial is concluded.

Mitala says in the interdiction letter that during the suspension, Nassali will be entitled to only half pay monthly and will only access office with permission from the chairperson of the commission. She will also not be able to leave the country except with express permission from Public Service, among other conditions.

This is only one out of 100 government officials who seem no to be getting away with misusing government funds anyhow.

There are many more officials who have been implicated in official corruption and despite of having an Inspector of government not many have been interdicted.

It seems that this government in its efforts to fight crime in this country will only manage better to arrest and then kill Uganda homosexuals.
Report to administrator
0 #2 kabayekka 2019-10-12 02:52
It is unfortunate that Uganda with its so many religious communities, do not understand internationally how bad government corruption is, more than minority homosexuality.

One reckons that homosexuals also pay their tax obligations like everybody else.

And for government officials to come over and pick-up those funds and use them as they so wished is the worst African community crime.
Report to administrator
0 #3 rubangakene 2019-10-12 19:37
Imagine in this day and age women have also become thieves, an area that was the terrain of menfolk.

So what has really happened to Uganda in the last 30 years; this is what we have to sit down and mull over. How many women officials have committed these corrupt crimes that has not been reported?
Report to administrator
+1 #4 WADADA roger 2019-10-13 12:24
She may have made a mistake but surely somebody wants her job, i dont see her surviving.
Report to administrator