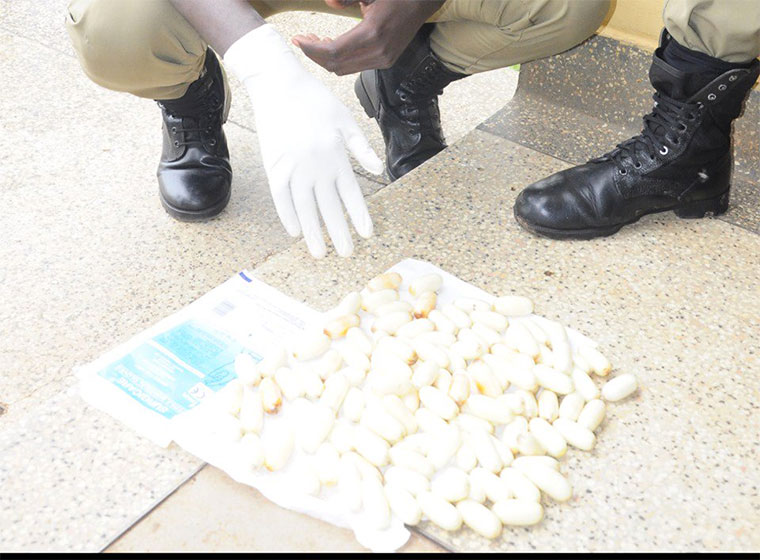 Owoyesigyire said the suspects who came into the country on September 29 were suspected by AVIPOL team since they were not clear on their destination. Though their luggage contained no drugs, police became suspicious of their bulged stomachs and were put on observation until each passed out 100 cocaine pellets.

“We are holding them on the offence of unlawful possession of narcotic drugs in accordance to section 4(1) and 2(a) of the Narcotic Drugs and Psychotropic Substances Control Act 2016,” said Owoyesigyire.

The duo, according to police, arrived at Entebbe airport at about 13:20 aboard Ethiopian Airlines flight number ET 338 from Brazil via Addis Ababa. AVIPOL narcotics team suspected them to be in possession of narcotics drug by swallowing.

“Both were taken to the aviation police station and put on observation whereupon each passed out 100 pellets making a total of 200 pellets of substances suspected to be narcotics drugs,” Owoyesigyire said.

Police said the 200 pellets had a gross weight of 2914.83gms and preliminary tests indicated cocaine. The pellets have since been submitted to Directorate of Government Analytical Laboratory for advanced analysis.

The duo has been slapped with two counts of unlawful possession of narcotics drugs and trafficking in narcotic drugs in accordance with Narcotic Drugs and Psychotropic Substances (control) Act 2016. Police said the suspects’ file has already been sent to resident state attorney and are likely to appear in Entebbe High court.

In June, URN published a story where AVIPOL had impounded narcotics drugs worth Shs 5.2 billion at Entebbe airport between January and June of this year.

From human trafficking to weapons and even gold/minerals from some dysfunctional/failed dictatorial countries/states.

They are connected with some of the regime's top officials. They are only "caught" when they failed to bribe/pay them. Mafia style.
Report to administrator
0 #2 WADADA roger 2019-10-13 09:10
These two Bolivian nationals did not do their home work well, there is no way they could be arrested in Uganda if they had done their home work well by bribing all the stake holders manning the exit points.