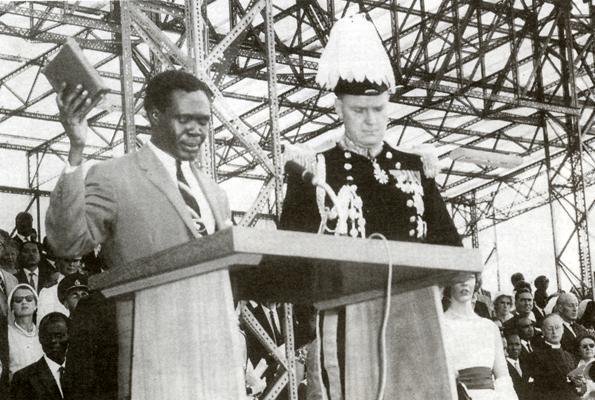 Milton Obote swear in as first leader of independent Uganda

There is no record of a concerted effort by indigenous Ugandans to resist or rebel against British colonial rule. Why was that the case?

After sharing Africa as a cake during the Berlin conference (1884-1885), the European colonial powers were faced with the challenge of how to own that cake and eat it (exploiting and administering their pieces, the colonies). They devised various strategies to achieve this end. France opted for assimilation policy by which they taught their subjects that by adopting French language and culture, they could become French citizens.

Germany and Belgium, among other colonial powers, also used direct rule but did not practise assimilation. Britain opted for indirect rule policy which they applied in Uganda using Buganda as their base. First, the entity called Uganda today is a British creation, with the name itself derived from “Buganda”, a kingdom that had existed for about five centuries before the coming of the colonialists.

The present-day Uganda hosted several tribes that lived and managed their own affairs differently. Uganda became a British protectorate from 1894 until 1962 when independence was granted. Britain’s declaration of protectorate status over Uganda was motivated by the strategic importance of River Nile whose source was partly in Buganda, and its upper basin.

From the early 20th century onwards, Britain secured the source of the River Nile and the Upper Nile basin through the control of the leaders in the region through which the river snaked its way.

The British were faced with the challenge of inadequate personnel and limited resources. So, they resorted to using a ‘clever trick’ to conquer the territory of Uganda; the ‘divide and rule’ policy.

They made use of the well-established ‘traditional state’ of Buganda on a relatively large scale by emphasizing the differences and prejudices rather than the similarities between the peoples of Uganda, as Prof. Tarsis Kabwegyere, a sociologist, academician and senior politician, wrote in 1974.

They established different systems of administration over the same whole protectorate. The first alliance with Buganda was in a military expedition against King Kabalega of Bunyoro-Kitara kingdom, followed by negotiations for a treaty with Buganda chiefs which resulted in the signing of the 1900 Buganda agreement.

The agreement rewarded the chiefs with grants of freehold land (contrary to traditional custom) and rewarded Buganda by giving them administrative control over Bunyoro’s annexed land as a result of the latter’s defeat. This agreement further guaranteed the position of the Kabaka (King) and introduced a modified version of a traditional Baganda hierarchy of chiefs.

They acted under the supervision of the British officers (governor and commissioners). Religious divisions were also entrenched by favoring Protestants over Catholic or Muslim chiefs and subjects. Protestants dominated the hierarchy of landlord-chiefs, from the parish up to the county level, all paying homage to, and taking orders from the colonial government.

Once established, this ‘Buganda’ system of administration was extended to the rest of the country.

STATE WITHIN A STATE

The British then used the Baganda chiefs to subdue the rest of Uganda. By treating Buganda as a ‘state within a state’, the British planted the seeds of ethnic tensions and conflicts in Uganda. The Baganda then developed a high sense of nationalism and entitlement which was reinforced by their economic and political centrality in Uganda.

Other parts of Uganda were considered by the British as satellites of Buganda. This caused widespread anti-Buganda sentiments especially in Bunyoro.

By declaring Uganda a protectorate, the interests and opinions of the indigenous people were not taken into account. Likewise, in governing Uganda through informal control, that is, by collaborating with the Baganda or indigenous elite, the interests of the communities over which these elite governed were ignored.

In a number of instances, the communities showed their discontent at the new mode of informal control through riots directed at the newly-created corps of British-imposed indigenous leaders as in Buhweju and Kigezi. ‘Buganda-like’ agreements were thereafter signed with traditional rulers in other kingdoms like Bunyoro, Ankole and Tooro, while local chiefs were appointed in the remaining districts.

Consequently, the British expanded the kingdom of Nkore to include smaller kingdoms like Mpororo, Igara and Buhweju and renamed it Ankole, and also expanded Tooro kingdom to include parts of Bunyoro, which took the brunt of their ire with a reduction in its size as punishment for resisting and later rebelling against British colonialism.

This, therefore, means that the kingdoms did not correspond exactly to the areas under their influence before British colonialism, leading to ethnic tensions given the fact that the new adjustments could not take care of the different ethnic interests of the new areas assimilated.

A key feature of British collaboration was Semei Kakungulu, a Muganda chief who was sent to Busoga, Teso and Bukedi in eastern Uganda to transform these scattered chiefdoms into tribal organizations. Other collaborators went to Lango and Acholi in northern Uganda, and Kigezi. There, the collaborators were used to rule people who had no history of hierarchical rule.

They spread out as local tax collectors and labour lords. This sub-imperialism and Ganda cultural chauvinism were resented by the subjects. Wherever they went, the Baganda insisted on the exclusive use of their language, Luganda; they planted bananas (their staple) as the only proper food worth eating, and regarded their traditional dress, the ‘kanzu’, as civilized; all else was barbaric.

They also encouraged and engaged in missionary work, attempting to convert locals to their form of Christianity or Islam. In some areas, the resulting backlash aided the efforts of religious rivals. For example, Catholics won converts in areas where oppressive rule was identified with a Protestant Muganda chief.

Cash crop production was discouraged in northern areas (West Nile, Acholi and Lango) and in Kigezi which were developed as labor reserves, whence were recruited not only soldiers and policemen, but also manual workers in factories and cash crop
plantations.

The result of this ‘division of labour’, according to Prof. Mahmood Mamdani, was the building of ethnic cleavages that would entrench ethnic consciousness in the long run in the country. The British brought in Asians from India (present-day India, Pakistan and Bangladesh); majority came in connection with the construction of the Uganda Railway.

The British allowed the Asians to dominate the commercial sector because they were regarded as a non-national trading class
isolated from the people of Uganda, and hence easy to neutralize politically if they tried to challenge colonial interests.

Therefore, through divide and rule policy, the British managed to antagonize one region against another, religion against another, race against race and one tribe against another. Mamdani further notes, “every institution touched by the hand of the colonial state was given a pronounced regional or nationality character. It became a truism that a soldier must be a northerner, a civil servant a southerner, and a merchant an Asian.”

Socially, the Baganda were considered by the British to be superior to the rest of the tribes. In addition, colonial administrative centers were located in Kampala and Entebbe, both in Buganda. This brought Buganda region benefits in social services like
education, medical services, transport and telecommunication, among others, unlike the rest of the country.

For example, until independence in 1962, the Baganda filled a disproportionate number in secondary school places. In 1920, Buganda had 360 schools, western and eastern provinces had 42 each and there was none in northern Uganda, according to Kabwegyere.

Industrialization grew in Buganda at the expense of other regions. When the capital city Kampala, already offering central government jobs attracted industry, the Baganda were more available to take up employment from which hey built up skills and became more stable employees, leaving wage work to migrants from other parts of Uganda thus dividing the country into the South-Central rich and the rest poor.

The divide and rule policy enhanced the spirit of ethnic chauvinism which became a source of tension and conflict in post-independent Uganda. Uganda’s post-independent leaders simply perpetuated the divide and rule policy through ethnic incompatibility as started by the British to obtain and use state power in order to gain access to scarce resources commanded by the state.

This would, therefore, partly explain the reason and the nature of conflicts in post-independence Uganda. Subsequent governments, and chiefly the National Resistance Movement (NRM) led by President Yoweri Museveni that has lasted longest, have attempted to correct the divisive distortions and lingering confusion on collective nationhood.

If it took 68 years of colonialism to plant those seeds, it may take the same time-lapse or longer to achieve equilibrium and completely shake off the downside of colonialism.

Happy independence anniversary to you all!

And the author contradicts himself by acknowledging later in the article that indeed Kabalega and Mwanga were captured fighting against colonialism.

It was a protracted was that lasted years and terribly troubled the British. Read accounts of their commissioners for testimonies. Acts of such African heroes should not be explained away
Report to administrator
+1 #12 Kirwana-Kibuuka 2019-10-12 18:42
Kampala became a Capital City after independence, please do a research on that.

Before Baganda coming with their traditional dresses most communities in North and North Eastern were not wearing clothes (even now some do), unless you preferred wickedness as a traditional dressing.

You said Uganda a British creation, and at the same time say they made Buganda a Nation with in a Nation. Unless you have a new vision of the Word Nation, but as far as I know all those people you mention are Nations, Bunyoro, Acholi, Lang etc please check the definition of the word Nation.
Report to administrator
0 #13 Akot 2019-10-12 18:46
[There is no record of a concerted effort by indigenous Ugandans to resist or rebel against British colonial rule. Why was that the case?]

The moment Dr Obote & Sir E. Mutesa ll made Uganda 1 country, 1 people, the British had no option but to hand over & it was a celebration, compared to other divided people in conquered countries who had to take to arms.

Museveni is a foreign conqueror & Ugandans MUST bringing down the tribalistic system he so tactfully put in place to ensure we are POWERLESS against him - UNITY of Ugandans will leave Museveni LANDLESS with no right to occupy Statet House as it's Ugandans who legalse his stay there through fake elections!

Why be migrant Museveni's slaves without say in a country formed by our tribal lands in which the demon has non, yet tribalistically divided & rule for life?
Report to administrator
0 #14 Akot 2019-10-12 18:59
Lysol, thanks!

Ugandans glued to cultural attachment are so so blind, naive & don't see it's this cultural/tribal attachment that is keeping Musevein in power & for life!

Ugandans are the last to see it's them/those in posts, ensuring there is no opposition to Museveni!

Who locked up Dr S.Nyanzi & for what reason?

Who are those ensuring mp Bobi Wine doesn't even sing for Ugandans?

Yet now, Museveni doesn't need tribal leaders in posts & can dissolve the disgusting inhuman tribalistic system to Reform the Republic of Uganda!

Ugandans are alright with the 18 century tribalistic system that locks them with Museveni but keeps the outside world out of even blaming Museveni for being the worst dictator ever!
Report to administrator
0 #15 Akot 2019-10-12 19:10
Quoting ymusumba:

The Baganda are not the ones driving pple out of their land in Bulisa and Bunyoro this is part of post1986 history.

When you read about pple being compensated of vast lands in Bunyoro they are Baganda? I don't think they are the ones that are interested in Atiak land and also destroying wetlands with impunity.

Neither they are not the ones that kept the Acholis in IDP camps for more than 20 years. When we talk about independence we had the European colonialist previously but now we are under African colonialism.

If you are part of the African colonialists then truly you received your independence hence you can write such fiction negatively portraying one ethnic group out of the many in the country.

It's time Ugandans UNITE & get second independence, then do as they wish after!
Report to administrator
12